Eight items. The collection consists of letters, documents and photographs related to Sergeant George William Wilson (1580045 Royal Air Force). He was a bomb aimer with 576 Squadron RAF Elsham Wolds. His Lancaster, ND403 took off on a bulls-eye training exercise 12 May 1944 but failed to return. His crew were reported missing, presumed killed. Items include post war correspondence of his surviving relatives and a letter in the event of my death addressed to his wife.

The collection has been donated to the IBCC Digital Archive for digitisation by Andy Smith and catalogued by Carolyn Baker.

Additional information on George William Wilson is available via the IBCC Losses Database.

Letter to his wife from George Wilson 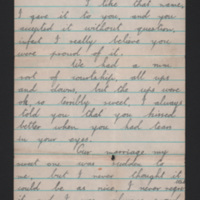 Sergeant George William Wilson praises her qualities, remembers the happy moments they spent together and gives instructions about the upbringing of their children. Urges her to remarry, as ‘you will be still young and beautiful’. Envelope…

Letter to his wife from George Wilson 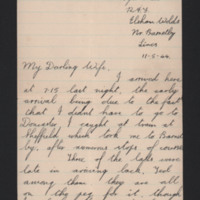 Letter from George Wilson to his wife telling her he has arrived at RAF Elsham Wolds with other people who were late. Discuss details of their recent marriage, asks for certain items of clothing to be sent to him and states he has his wife’s…

Letter to his mother from George Wilson 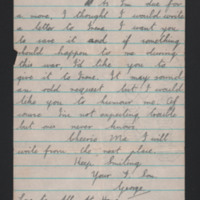 Letter from George Wilson to his mother enclosing a letter to Irene, and asking her to save it and give it to her should anything happen to him. On the reverse 'PRIVATE'. 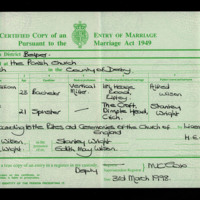 Certified copy of an entry of marriage on 21 March 1942 between George William Wilson, 23, Batchelor of 181 Heage Road, Ripley and Constance Irene Wright, 21, Spinster of The Croft, Dimple Head, Crich at The Parish Church, Parish of Crich, County of… 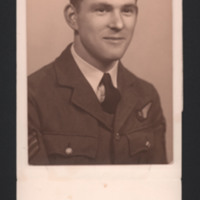 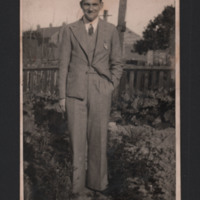 Wedding of George and Irene Wilson 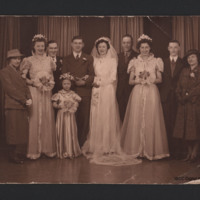 Group wedding portrait. Sergeant George Wilson is in civilian clothes, there are three women in bridesmaid’s dresses and a younger girl, also dressed as a bridesmaid.

This above all, to thine own self be true 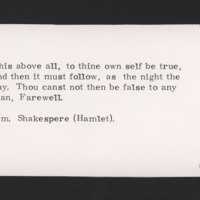 Text reads 'This above all, to thine own self be true, and then it must follow, as the night the day. Thou canst not then be false to any man. Farewell. Wm. Shakespeare (Hamlet).'.
View all 8 items