27 items. An oral history interview with Eileen Pickering (b. 1922, 483863 Royal Air Force). She served as a signaller in the Women's Auxiliary Air Force at 5 Group Head Quarters at Grantham and at Bletchley Park. the collection includes memoirs, a poster, photograph, bible, drawings and mementos. Two sub collections containing cards and drawings.

The collection has been loaned to the IBCC Digital Archive for digitisation by Eileen Pickering and catalogued by Nigel Huckins. 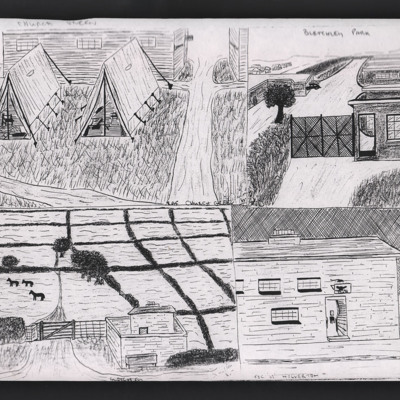 Four drawings. Top left drawing - a hut with tents in front and pathways bottom and right captioned 'RAF Church Green'. Top right drawing- a building on the left with a gate between it and a hedge. Wall and fields on the left. Captioned 'Bletchley… 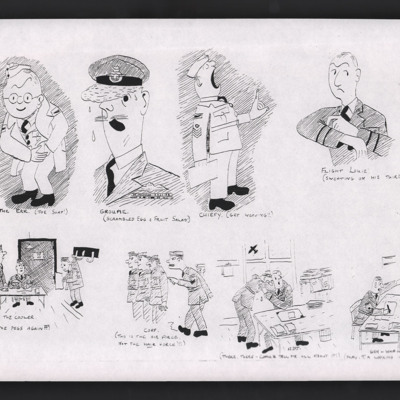 Eight drawings of caricaturing people in Royal Air Force of various ranks. All have captions explaining each drawing. 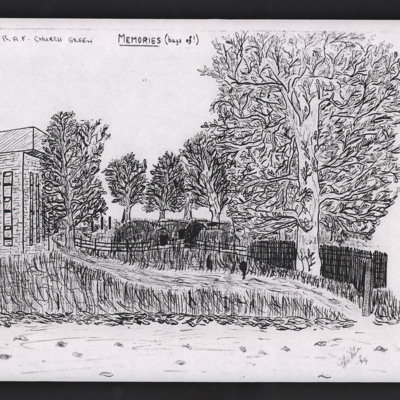 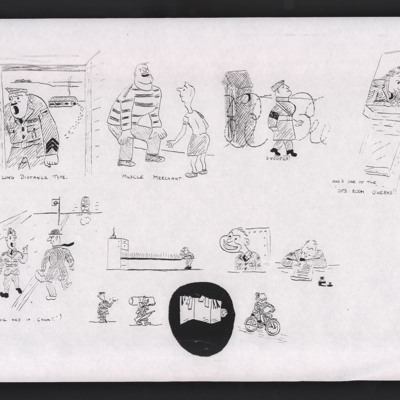 Twelve caricatures of various figures, some in uniform. others not. Five have captions describing figures. 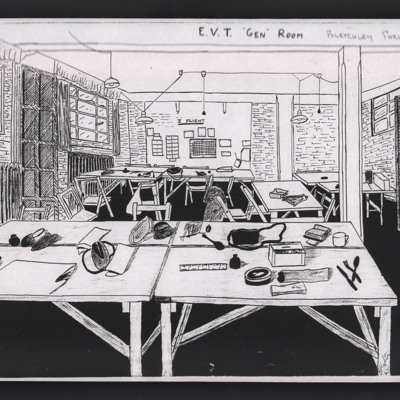 Drawing of room inside brick hut, In the fore foreground four tables with various objects. Towards the back more tables and notification board on back wall. Left side wall has windows with radiators under. Right wall has window high up an large… 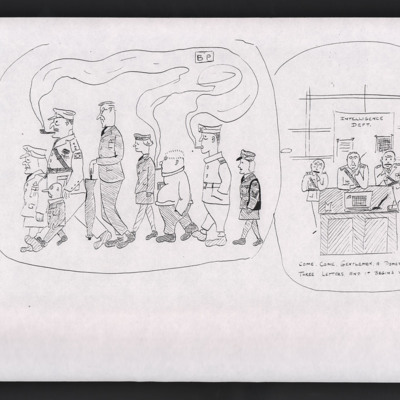 Eight figures in line from left to middle in various uniform or other dress. Two smoke cigarettes and one a pipe the smoke from all gathers above them, To the right three figures in another bubble struggling to find the answer to a crossword clue.… 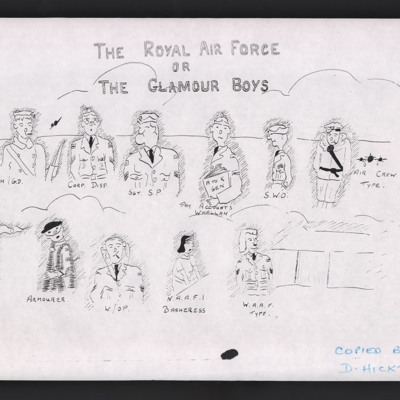 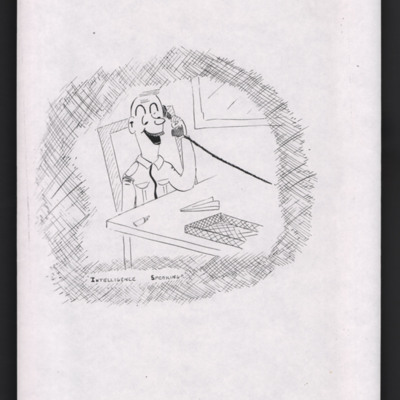 Cartoon drawing of an airman with empty in-tray and paper aeroplane on desk answering the telephone. 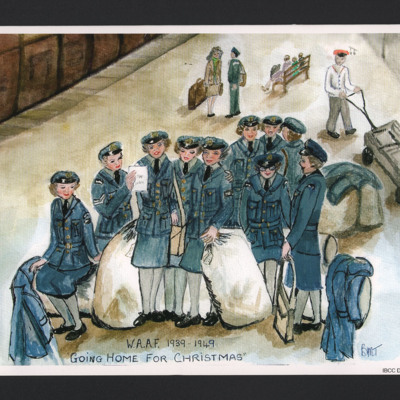 On the front coloured artwork depicting a group wearing Women's Auxiliary Air Force uniform with a number of large white sacks, One woman second from left is reading a letter. In the background a railway porter and other people. Captioned 'WAAF… 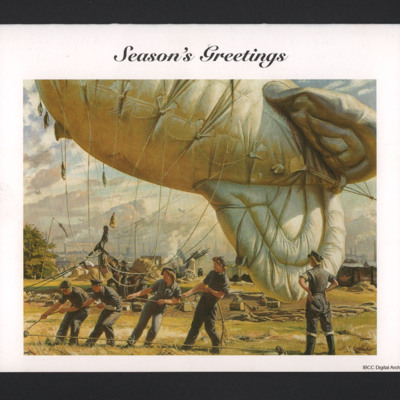 On the front under Season's Greetings coloured artwork showing a group of three women and a man hauling on rope while a woman wearing overalls and hat stands in charge. In the background a barrage balloon just of the ground below which another group… 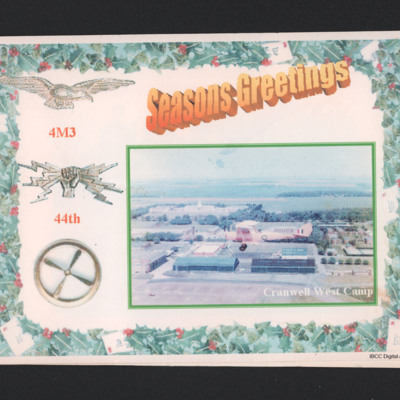 On the front holly surround with RAF eagle badge top left, below this '4M3, then a hand holding lightning bolts below that '44th' then at the bottom left a propeller in ring. On the right under Seasons Greetings a colour air-to-ground photograph of… 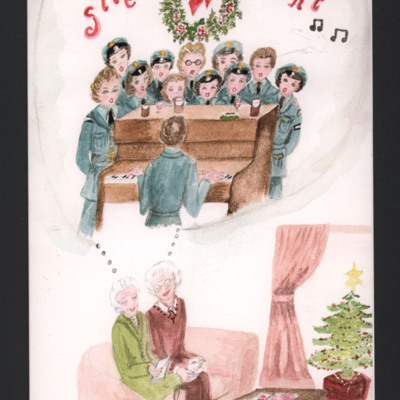 On the front artwork showing at bottom two elderly ladies on a sofa with coffee table and Christmas tree. Thinking bubbles lead upwards to a crowd of women in uniform round a piano. On the inside left a WAAF Association badge and text 'Our thanks go… 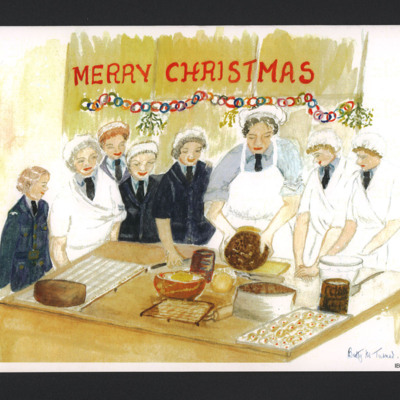 On the front artwork showing women dressed in various uniform including cooks round a kitchen table covered with cakes and utensils, Text 'Merry Christmas. Signed Betty M Turner. On the inside top text 'Our thanks go to member Betty Turner for… 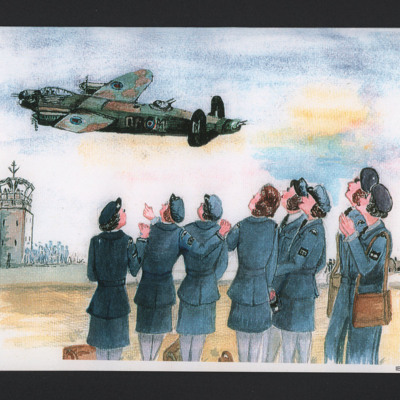 On the front artwork with a group of Women's Auxiliary Air Force members watching a four engine bomber flying past over a control tower. On the inside season's greetings from the WAAF Association. 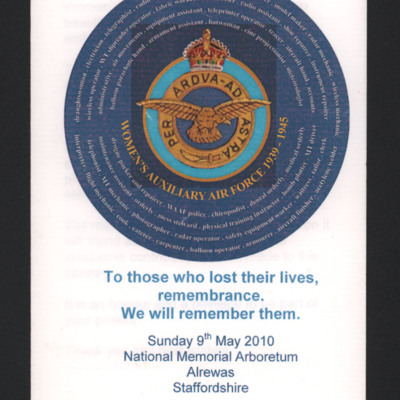 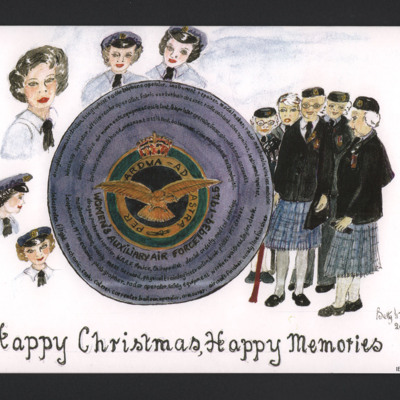 On the front women in Women's Auxiliary Air Force uniform and others with kilts and jackets around a shield with air force symbol and other text. On the inside seasons greetings from the WAAF Association. 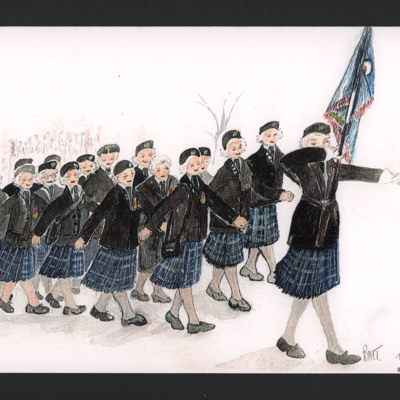 On the front a squad of women wearing kilts, jackets and beret. Leader carries a RAF ensign. Inside seasons greetings from the WAAF Association.

Two men and woman in front of a brick building 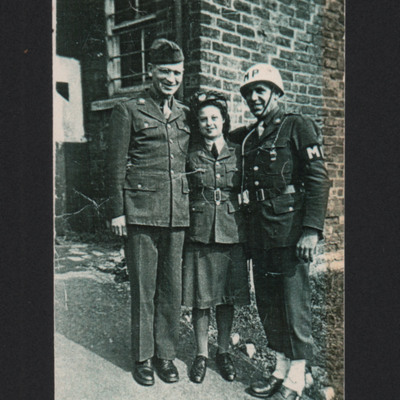 Two men in American military uniform; the one on the left tunic and side cap. The one on the right with white military police helmet. Between them a woman in uniform tunic and skirt. On the reverse 'Edna Emmett and yank friends'. 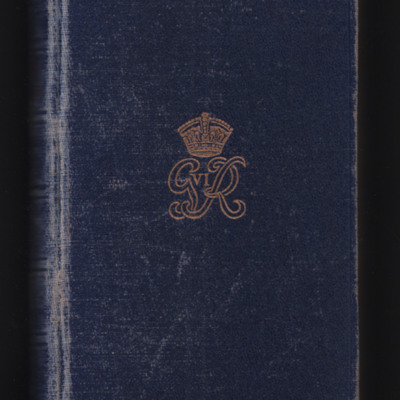 Blue bible cover and inside first page with message from His Majesty the King. On inside on cover '483863 LACW E Gascoyne (Pickering). Additional information about this item was kindly provided by the donor. 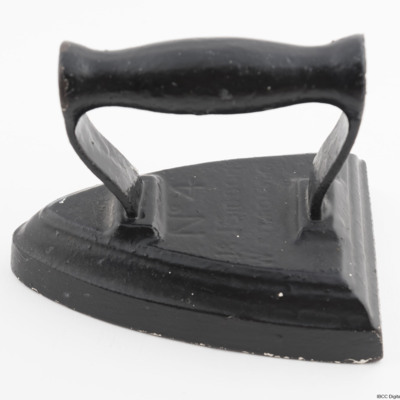 Metal flat iron WAAF issue. Additional information about this item was kindly provided by the donor 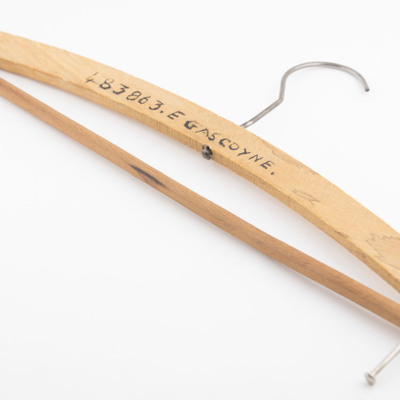 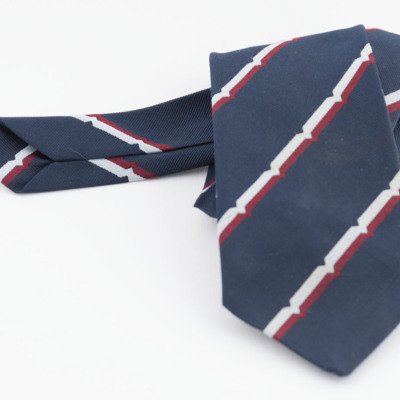 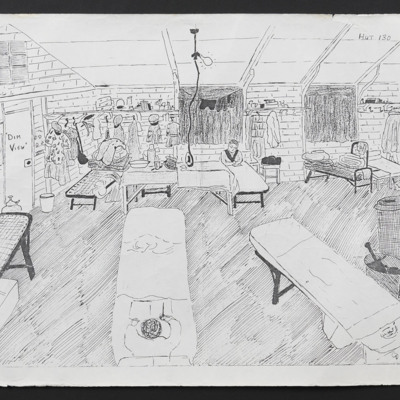 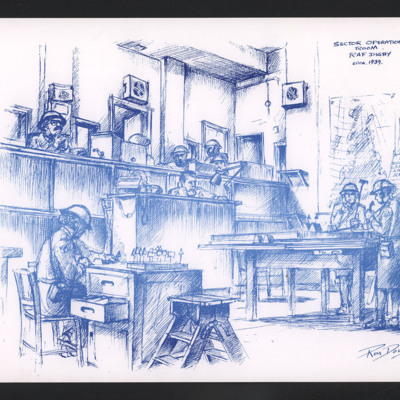 Pen and ink drawing of operations room with raised platforms to the left and tables in front. Men and women working at tables and on platforms. map on wall to right and squawk boxes high up on walls. Titled 'Sector Operations Room, RAF Digby 1939'. 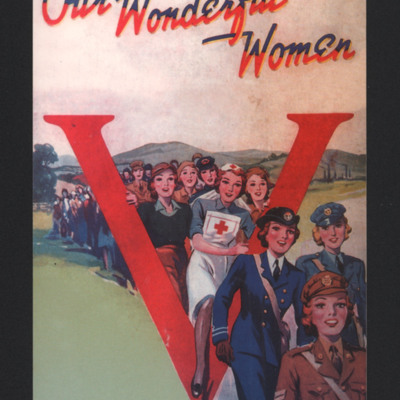 Colour artwork poster with queue of women with three in army, RAF and Navy uniform at the front having stepped through a large V. They are followed by a nurse and a mass of other women in various dress. In the background a hill and trees.
View all 27 items