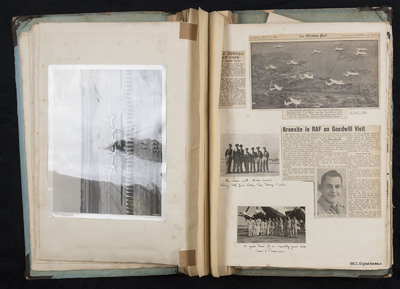 Photograph 1 is a line of airmen and a guard of honour in front of a Lancaster. Item 1 is a newspaper cutting referring to the arrival of the Lancasters over New York. Item 2 refers to the arrival of the Lancasters and includes an air to air shot of 12 Lancasters over New York. It is dated 18 July 1946. Item 3 is a newspaper cutting 'Bronxite in RAF on Goodwill Visit'. A native of the Bronx is on detachment to 35 squadron. The cutting refers to the arrival of 35 squadron in New York. Photograph 2 is seven airmen captioned 'The crew with Eddy (central) Tommy, Self, Jack, Ted, Tedney, Charlie'. Photograph 3 is 12 airmen standing in front of a Lancaster captioned 'A good load for an equally good kite Crew & Passengers'.

[photograph]
LANCASTER BOMBERS of the famous Pathfinder Squadron No. 35 in flight over the East River, New York, last Thursday. These R.A.F. planes have been sent on a good will mission to the United States.

Bronxite in RAF on Goodwill Visit


The Bronx has a Yank in the R.A.F. He is Tech Sgt. Edward S. Machonis, 728 Elton Ave, who has been placed on detached service with Squadron 35 of the Royal Air Force, now on a good will tour of the United States.
Because of his rating as chief operator of the Army communications service at Mitchel Field, the sergeant was assigned to brief the crews of the giant four motored Lancaster bombers on American communication data.
He was flown to Gander Field, Newfoundland, to meet the 16 bombers on their flight from England.

“I was taken up to Newfoundland by Squadron Leader Pearson, who preceded the main flight.

It was my job to see they were thoroughly informed about radio ranges and communication facilities that would be encountered during their trip,” he said.

The visiting airmen were grouped in a hangar on the field, and the 24-year-old American sergeant presented the information to them. Following his talk, he invited questions.

With all routine matters taken care of, the flight to New York continued. “We had prefect weather coming down. It couldn’t have been better if we personally ordered it,” the sergeant said.

The 207 officers and enlisted men of the British Squadron were welcomed at the Long Island airport on Wednesday by civil and Army officials, which included Col. L. R. Parker, base commander of the field: Lt. Gen. George E. Stratemeyer, Gen. Jimmie Doolittle and Frederick Reinicke, New York City Commissioner of Aviation.

On Thursday, the 16 huge bombers flew over the city as the first mission of their tour. Sgt Machonis, supervising the radio communications, lauded the cooperation and efficiency of the crews.

“Their lead navigator,” he said, “told us we would be over the Empire States building at exactly 1.20 p.m. We hit it right on the second.”

Headed by Wing Commander Allan J. I. Craig, the Lancasters will tour the States as guests of the Army Air Forces and will hold the position of honor [sic] in an aerial review to be held on Air Force Day, Aug. 1, over Los Angeles. On Aug. 18, the squadron will arrive at Mitchel Field and will then return to England.

Sgt Machonis, who lives with his Australian wife, Iris, and their nine-months-old baby Michael, is not impressed with the unusual duty that has been assigned to him.

The sergeant has been in the Army over four years and intends to make a career of it.