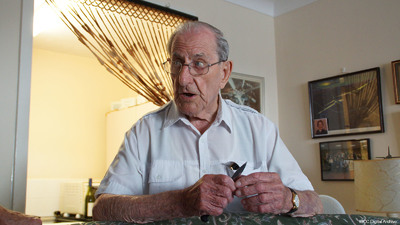 Interview has intermittent noise and is available only at the International Bomber Command Centre / University of Lincoln.

CB: My name is Chris Brockbank and today is the nineteenth of July two thousand and twelve, and I’m in Leighton Buzzard with Robert Norman William Didwell, known as ‘Young Did’, and er, we’re going to talk about his experiences as a man on the ground, keeping those valiant people flying. So, what is your first recollection of life with the family Norman?
RD: With the family?
CB: Yeh
RD: Oh, we had a happy old family
CB: Right
RD: I had an elder brother, who was older than me, he was a regular soldier before the war
CB: Right
RD: Erm, and I had a happy childhood, I was well fed which a lot of them in the nineteen twenties were not, erm, and a lot of people were starving but I was very lucky. My Mother was a, started off as a kitchen maid in with Sir Henry and Lady Campbell-Bannerman who was the Prime Minister of England for the old Liberal party, they had a big er, castle at outside of [inaudible] and er, they had a big townhouse at 137 Cromwell Road, and next door, to that building, in Cromwell Road, was 139, and who do you know lived there?
CB: [inaudible]
RD: Lady Scott, widow of Scott of the Antarctic, but she married Sir Arthur Kennet who was a liberal MP. So, at the time of when Scott, as you know [inaudible] a great nationalist, and a Lieutenant Commander in the Royal Navy got the distinguished service cross, he would be about twelve when I was in my first three or four years growing up, so, go back with a long way, and er, as I say, I left school and got a job with a local grocers, as an errand boy and then I went to the post office as a telegram boy, then I decided to join the air force [laughs] I joined up at the end of thirty-eight [pause] there you are
CB: Ok, so where did you join the RAF?
RD: Where did I join?
CB: Yes
RD: I used to go to join up you went to Kingsbury, which was the Air Ministry, then you went to either Uxbridge or Halton, if you were clever enough, er, you could join when you were fifteen at Halton as a boy apprentice, and you did three years at Halton. Did you know that, did you know?
CB: Yes
RD: Yep, erm, and most of the entries at Halton were very clever blokes and some of them rose right up the top. You go to Halton camp, there’s photographs of those who started as boy entrants, boy apprentices and right up the top of the ladder, air rank
CB: So, the top six in any pass out went to Cranwell?
RD: Yeh
CB: Right
RD: Thirty, thirty-two and thirty-one entries, were two very good entries, they did both trades, engine and air frame
CB: Which one were you in?
RD: Er?
CB: Which one were you in?
RD: I wasn’t, I never went to Halton
CB: Where did you go?
RD: I did my training at Uxbridge, your [inaudible] training you all do it, if you joined straight in at the age of eighteen or seventeen, then you do [inaudible] the technical bit you do it at Henlow which is an old RAF station, its only down the road from here, Henlow
CB: Absolutely, yeh
RD: You did a few weeks at Henlow telling you the theory of flight, what an aircraft does etcetera, etcetera, and then from then on, you go on, then, after I had been, when the war broke out, the second or third day, we moved from Mildenhall on the second of August nineteen thirty-nine, to Rowley Mile heath and Rowley Mile racecourse, and took over the Rowley Mile stadium, where we all slept, and eat and everything else, and er, so, we were in it from the start, right. Now, we hadn’t been there three or four days and er, ‘sticky glue’ said, ‘any of you guys got a driving licence?’ Well, fortunately, I passed a driving test because my Dad I don’t know [inaudible] I passed in nineteen thirty-eight and got a driving licence and er, he, we’d only been there a couple of days at Newmarket, and he said, ‘anybody here got a driving licence?’ So, there was, Dick Pike, who came from Leighton Buzzard, and myself, he said, right, he said, Flight Lieutenant Stanley is going over to Mildenhall, he’ll pick you up for the flight, he said, and you’ve got to try and do a test on a tractor [doorbell ringing]
[unknown] Hello
CB: So, just as we
RD: [inaudible]
CB: Yeh, from
Transcription stopped at 6.16. Sound quality too poor