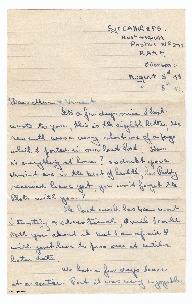 Letter from Sergeant Jim Cahir to his mother and brother. He writes that he has had a few days leave at the port of Colon whilst travelling by ship from Australia to England. He describes the Port in great detail, telling about the tourist shops, the bars and clubs. He also visited the Cathedral and describes the surrounding area and the interior of it. He also says that the prices of meals in this port were very high so only ate in the American Club whilst there. They are now back at sea on their onward journey.