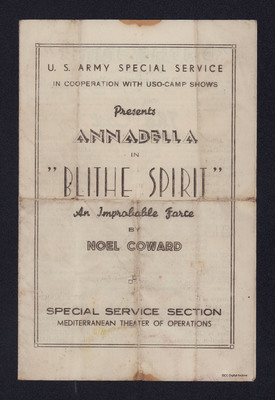 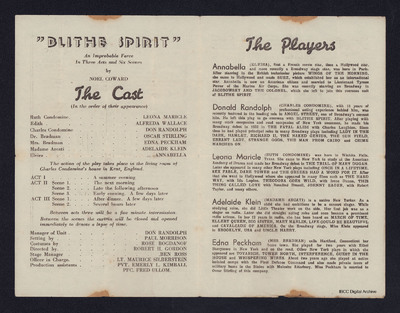 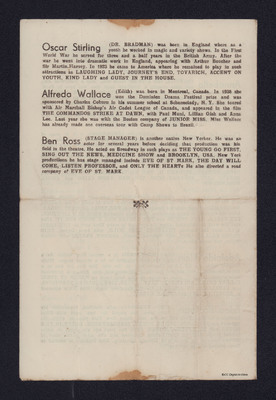 U.S. ARMY SPECIAL SERVICE
IN COOPERATION WITH USO-CAMP SHOWS
Presents
ANNABELLA
IN
“BLITHE SPIRIT”
An Improbable Farce
BY
NOEL COWARD
SPECIAL SERVICE SECTION
MEDITERRANEAN THEATER [sic] OF OPERATIONS
[page break]
“BLITHE SPIRIT”
An Improbable Farce
In three Acts and Six Scenes
By
NOEL COWARD
The Cast
(In the order of their appearance)
Ruth Condomine – LEONA MARICLE
Edith – ALFREDA WALLACE
Charles Condomine – DON RANDOLPH
Dr. Bradman – OSCAR STIRLING
Mrs. Bradman – Edna Peckham
Madame Arcati – ADELAIDE KLEIN
Elivira ANNABELLA
The action of the play takes place in the living room of Charles Condomine’s house in Kent, England.
ACT I – A Summer evening
ACT II Scene 1. – The next morning
Scene 2. – Late the following afternoon
Scene 3. – Early evening. A few days later
ACT III Scene 1. – After dinner. A few days later
Scene 2. – Several hours later
Between acts there will be a five minute intermission. Between the scenes the curtain will be closed and opened immediately to denote a lapse of time.
Manager of Unit – DON RANDOLPH
Setting by – PAUL MORRISON
Costumes by – ROSE BOGDANOF
Directed by – ROBERT H. GORDON
Stage Manager – BEN ROSS
Officer in Charge – LT. MAURICE SILBERSTEIN
Production Assistants – PVT. EMERLY L. KIMBALL – PFC. FRED ULLOM.
[page break]
The Players
Annabella (ELVIRA), first a French movie star, then a Hollywood star, and more recently a Broadway stage star, was born in Paris. After starring in the British technicolor [sic] picture WINGS OF THE MORNING, she came to Hollywood and made SUEZ, which established her as an international star. Annabella is now an American citizen and married to Lieutenant Tyrone Power of the Marine Air Corps. She was recently starring on Broadway in JACOBOWSKY AND THE COLONEL, which she left to join this overseas unit of BLITHE SPIRIT.
Donald Randolph (CHARLES CONDOMINE), with 18 years of professional acting experience behind him, was recently featured in the leading role in ANGEL STREET, one of Broadway’s current hits. He left this play to go overseas with BLITHE SPIRIT. After playing with many stock companies and road companies of New York successes, he made his Broadway debut in 1932 in THE FATAL ALIBI with Charles Laughton. Since then he had played principal roles in many Broadway plays including LADY IN THE DARK, HAMLET, RICHARD II, THE NAKED GENIUS, THE SUN FIELD, ERRANT LADY, STRANGE GODS, THE MAN FROM CAIRO and CRIME MARCHES ON.
Leona Maricle (RUTH CONDOMINE) was born in Wichita Falls, Texas. She came to New York to study at the American Academy of Drama and made her Broadway debut in THE TRIAL OF MARY DUGAN. Later she appeared in many other New York plays including ONCE IN A LIFETIME, SEX FABLE, DARE TOWER and THE GREEKS HAD A WORD FOR IT. After that she went to Hollywood where she appeared in many films such as THE HARD WAY, with Ida Lupino, THEODORA GOES WILD, with Irene Dunne, THIS THING CALLED LOVE with Rosalind Russell, JOHNNY EAGER, with Robert Taylor, and many others.
Adelaide Klein (MADAME ARCATI) is a native New Yorker. As a child she had ambitions to be a concert singer. While studying voice, she did Little Theater [sic] work on the side. Her first job was as a singer on radio. Later she did straight acting roles and soon became a prominent radio actress. In her 12 years in radio, she has been heard on MARCH OF TIME, ELLERY QUEEN, BIG SISTER, MARY MARLIN, LIFE COULD BE BEAUTIFUL and CAVALCADE OF AMERICA. On the Broadway stage, Miss Klein appeared in BROOKLYN, USA and UNCLE HARRY.
Edna Peckham (MRS BRADMAN) calls Hartford, Connecticut her home town. She played for two years with Ethel Barrymore in New York and on the road. Other New York plays in which she appeared are TOVARICH, TOWER NORTH, INTERFERENCE, GUEST IN THE HOUSE and WHISPERING WIRES. About two years ago she played at active isolated camps with the First Defence Command and also made private tours of military bases in the States with Malcolm Atterbury. Miss Pockham is married to Oscar Stirling of this company.
[page break]
Oscar Stirling (DR. BRADMAN) was born in England where as a youth he worked in magic and variety shows. In the First World War he served for three and a half years in the British Army. After the war he went into dramatic work in England, appearing with Arthur Boucher and Sir Martin Harvey. In 1923 he came to America where he remained to play in such attractions as LAUGHING LADY, JOURNEY’S END, TOVARICH, ACCENT ON YOUTH, KIND LADY and GUEST IN THE HOUSE.
Alfreda Wallace (Edith) was born in Montreal, Canada. In 1938 she won the Dominion Drama Festival prize and was sponsored by Charles Coburn in his summer school at Schenectady, N.Y. She toured with Air Marshall Bishop’s Air Cadet League of Canada, and appeared in the film THE COMMANDOS STRIKE AT DAWN, with Paul Muni, Lillian Gish and Anna Lee. Last year she was with the Boston company of JUNIOR MISS. Miss Wallace has already made one overseas tour with Camp Shows to Brazil.
Ben Ross (STAGE MANAGER) is another native New Yorker. He was an actor for several years before deciding that production was his first field in the theatre. He acted on Broadway in such plays as THE YOUNG GO FIRST, SING OUT THE NEWS, MEDICINE SHOW and BROOKLYN, USA. New York productions he has stage managed include EVE OF ST MARK, THE DAY WILL COME, LISTEN PROFESSOR, and ONLY THE HEART. He also directed a road company of EVE OF ST. MARK.
[symbol]