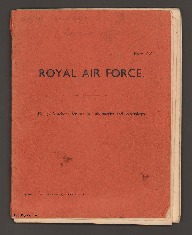 56 pages of course notes. Contains basic theory of thermometers, electricity, magnets, dynamos and batteries. Has more detailed notes on the atmosphere and gyroscopes followed by detailed description of Mk IV autopilot and all its component systems including flight controls. Includes hand-drawn colour diagrams.