18 items. The collection concerns the career of Flight Sergeant Stanley Archer. He originally trained as a fitter and served in Fighter Command before re-mustering as a flight engineer and flying operations with 97 Squadron from RAF Woodhall Spa. The collection includes a memoir, a joke medal, an engine test report, a diagram of constant speed units, three operation honours cards and 11 photographs.

The collection has been loaned to the IBCC Digital Archive for digitisation by Rosemarie Da Costa and catalogued by Barry Hunter. 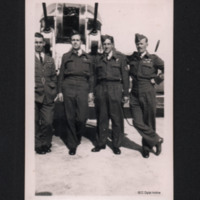 Four airmen, various ranks, standing in uniform in front of Lancaster tail turret armed with two .50 machine guns. On reverse ‘My Flt/Commander (next to me) and a couple of the boys. F/Sgt ‘Stan’ Archer Air Engineer 3rd from left 97 sqdn’. 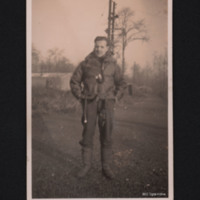 Full length portrait of Flight Sergeant Bateman. He is wearing a sheepskin flying jacket and is standing with his hands in his pockets. On reverse ‘F/S Bateman 463 sqdn’. 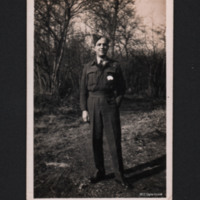 Full length portrait of Flight Sergeant Stanley Archer. He is wearing uniform and is standing at the edge of a wood. On reverse ‘F/S SW Archer 97 sqdn’ 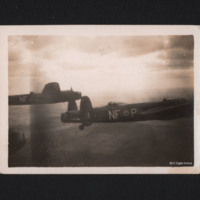 Air to air view of two Lancasters, ‘NF-P’ and ‘NF-J’ of 138 Squadron taken from a third aircraft. 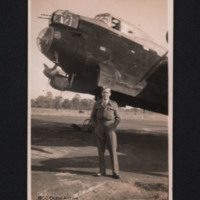 Stanley Archer standing with hands in pockets in front of the nose of a Lancaster on dispersal. He is in uniform with side cap. In the background near the starboard chock is a dog and a bicycle. On reverse ‘F/S SW Archer 97 sqdn’ 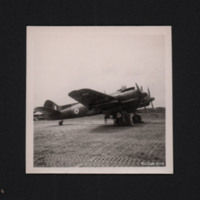 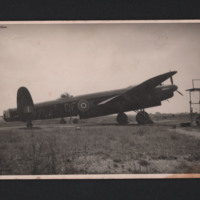 Starboard side view of Lancaster ‘DF-K’, on dispersal with wheeled access tower at right side and a second behind the aircraft. Code letters DF indicate it belonged to the Central Bombing Establishment. 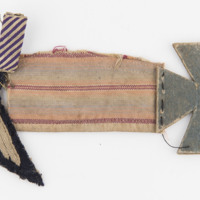 The brevet is pinned to a Distinguished Flying Medal ribbon with an imitation medal ribbon and cardboard iron cross. On the reverse ‘Garanteed ferous [sic] metal'. 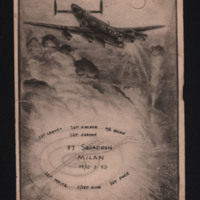 The aircraft is dropping bombs, there is a depiction of an explosion over a river with docks. In the distance searchlights are focused on a target. There is some anti-aircraft fire. The names of the crew are written on the card – 'Sgt Lennox, Sgt… 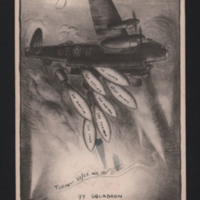 This stone was unlaid at Wilhelmshaven by 97 Sqdn 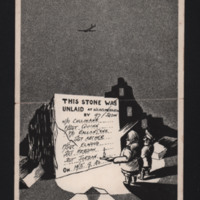 Cartoons of Hitler and Goering standing by stone with message. Goering is holding a candle in a candle holder. The light reveals a message ‘ This stone was unlaid at Wilhelmshaven by 97 Sqdn W/O Cullinane, F/Sgt Quinn, P/O Ballantyne, Sgt Archer,…

Lancaster in the snow at Waddington 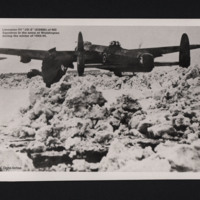 Lancaster, rear/side view, surrounded by snow. In foreground an airman with his back to the camera. Captioned ‘Lancaster III “JO-E” (ED806) of 463 Squadron in the snow at Waddington during the winter of 1943/44’. 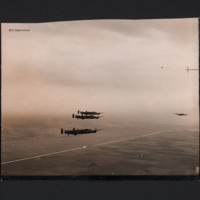 Air to air view of four Lancasters from the rear flying low. Squadron codes are ‘KM-K' and ' -J’. 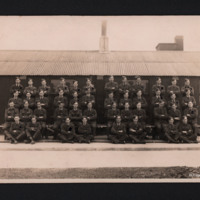 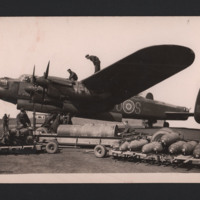 Side view of Lancaster R5868, being bombed up. In the foreground three trolleys full of bombs. Aircraft is under maintenance with two airmen on the wings and one in the pilot’s seat. Symbols indicating numerous operations on nose of aircraft. Four…

An uncompleted test report with a graph of altitude versus brake horse power.

Training as a flight engineer on Lancasters Stanley Archer’s account of his training as one of the first flight engineers for Lancaster operations in 1942. First he attended an air gunnery course then transferred to 97 squadron at RAF Woodhall Spa. He comments on a daylight operation on…
View all 18 items