68 items. The collection concerns Leading Aircraftman Albert Victor Cluett (1209046, Royal Air Force). After training in 1941/42 as an armourer, he was posted to 50 Squadron at RAF Swinderby and then RAF Skellingthorpe. The collections consists his official Royal Air Force documents, armourer training notebooks, photographs of colleagues, aircraft and locations as well as propaganda items, books in German and Dutch and items of memorabilia.

The collection has been loaned to the IBCC Digital Archive for digitisation by Albert Victor Cluett's daughter Pat Brown and catalogued by Nigel Huckins. 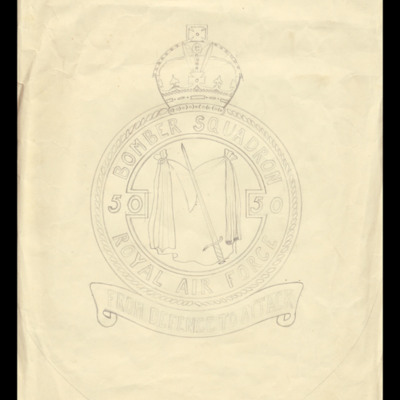 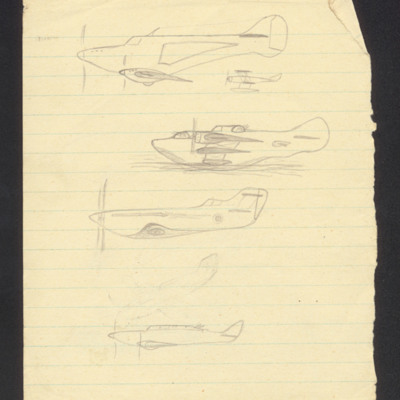 Four aircraft one below other. There is a fifth drawing of small seaplane drawn between the top two and the faint outline of another aircraft above the bottom one. 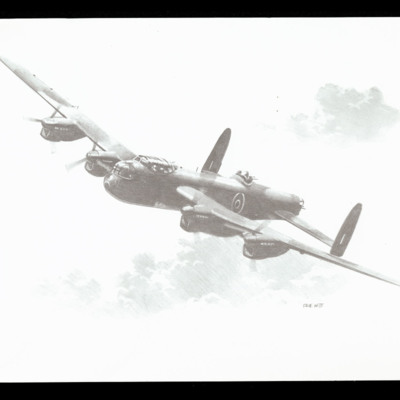 Front quarter view drawing of Lancaster in bank to port with clouds in the background. 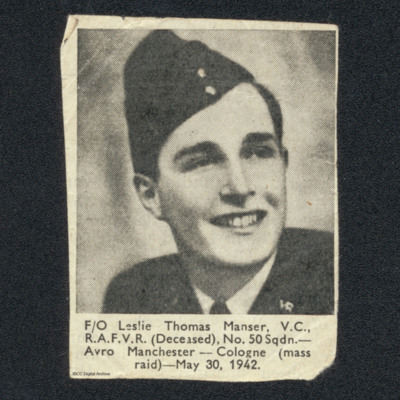 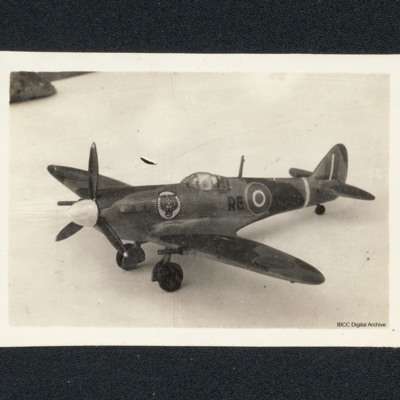 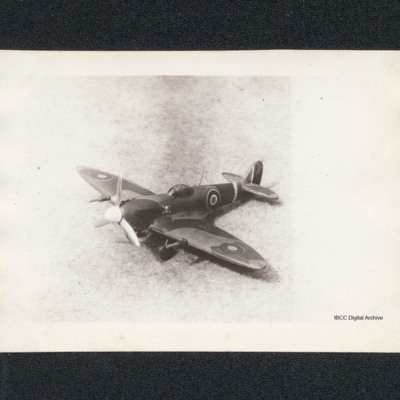 Picture of a model Typhoon aircraft with skull and cross bones nose art. 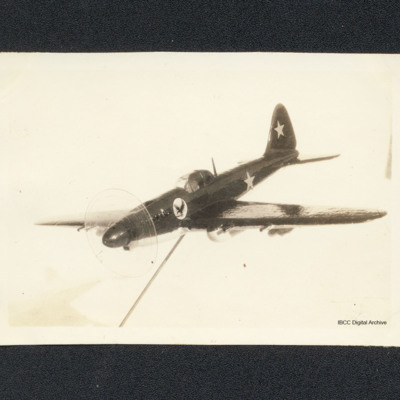 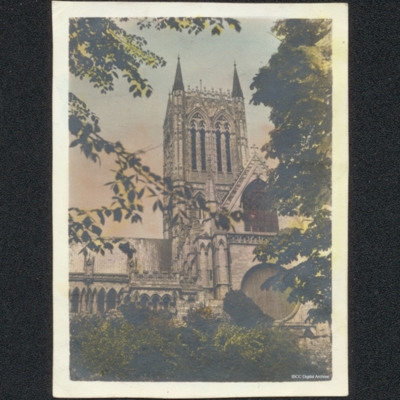 View of the south transept and centre tower of cathedral with trees in the foreground. The south rose window is boarded up. 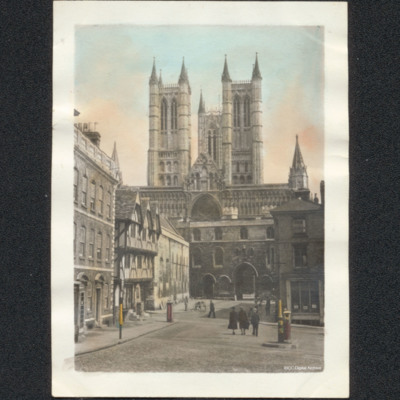 View of Lincoln Cathedral from the west. In the foreground buildings on left and right of a square where several people are walking. 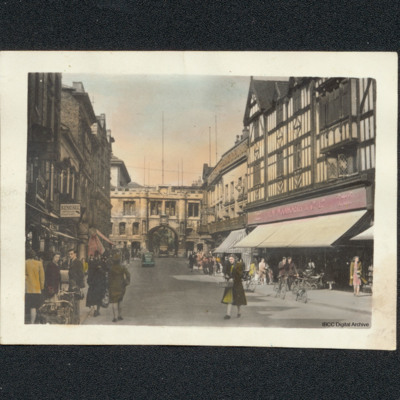 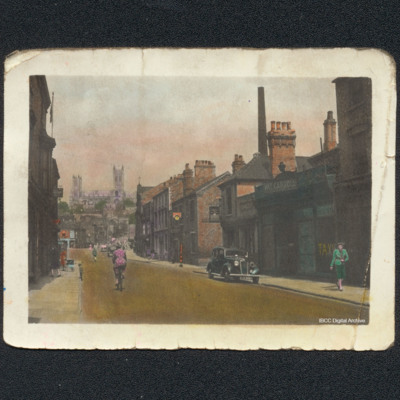 A road with shops either side runs up from the bottom. On the left a woman on a bicycle and a car parked on the right with a pedestrian on the far right. In the background on rising ground is Lincoln Cathedral. 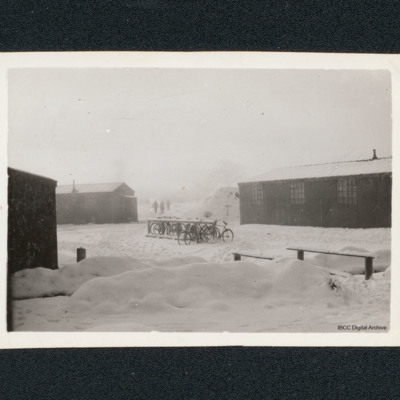 Three single story huts surround a stand with a large number of bicycles. The ground is covered by deep snow. In the background centre are three figures.

Group of airmen in front of a building 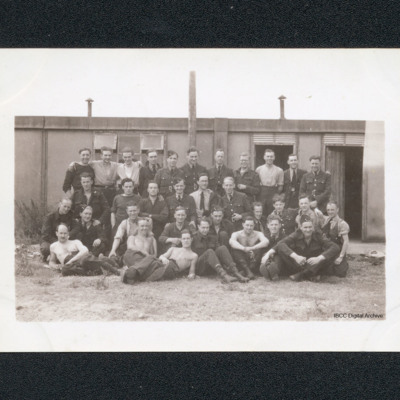 22 airmen in a variety of dress, some without shirts, lying, sitting and standing in front of a single story prefabricated building. The building has two doors on the right, a window on the left and chimneys on the roof.

Armourers in front of a building 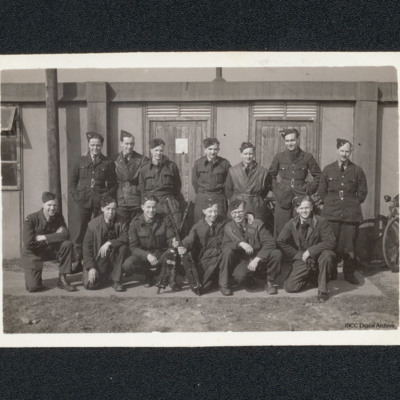 13 airmen wearing a variety of uniform but all with side caps in two rows in front of a building. Front row are kneeling and the centre two men are holding two crossed machine guns. The rear row are standing and in the background two doors, a window…

Group of armourers in front of a Nissen hut 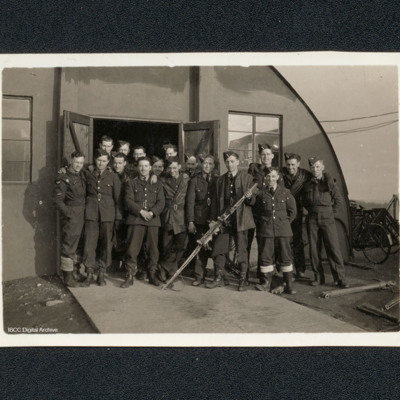 Seventeen airmen in a variety of uniform standing in the open door of a Nissen hut. One airman fifth from the right is holding a bomb rack. To the right tools on the ground and bicycles.

Group of airmen in front of a Nissen hut 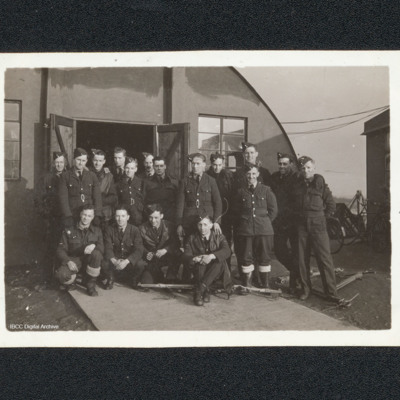 Seventeen airmen in various uniform in front of the open door of a Nissen hut. Four airmen are squatting in front and the others are standing. On the ground some equipment.

Airmen by the window of a hut 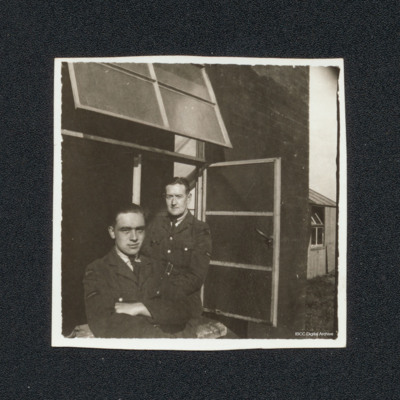 Two airmen, the left hand one with crossed arms and both wearing tunic, by the open window of a hut. On the reverse '(11), 50 Sqdn Swinderby, (Ching) Harry Corbourn + Me, after alnight [sic] call out'. 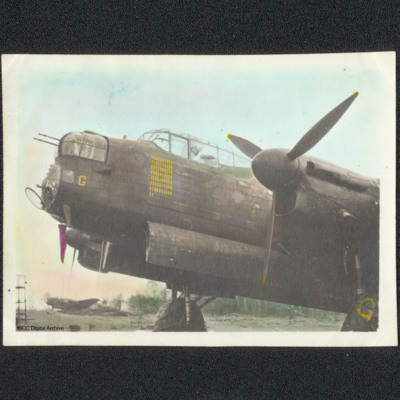 View of the front fuselage and port inboard engine of a Lancaster. The bomb doors are open and the main wheels covered. On the nose 'G' and 72 bomb symbols in seven rows. In the background bottom left another Lancaster. 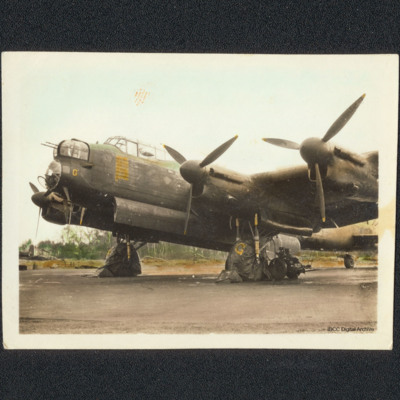 Front quarter view of port side of a Lancaster with bomb doors open. On the nose 'G' and several rows of bomb symbols. The main wheels have covers and there is a trolley accumulator by the port wheel. On the reverse 'ED588 50 Sqd Skellingthorpe,… 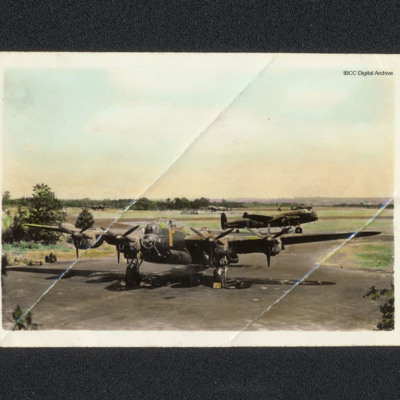 Six Lancasters dispersed around airfield on concrete pans. The Lancaster in the foreground is facing camera and has a large number of bomb symbols on the nose. Trees on the left as well as in the far distance. One Lancaster has the squadron code QR. 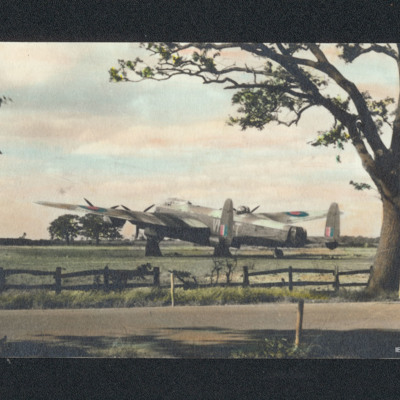 Rear quarter view of starboard side of Lancaster parked in a field. In the foreground a road, a wooden fence and a tree on the right. In the background a hedge and trees. On the reverse '50 Sqd Skellingthorpe, R5546 Lost 31-3-44, after repair,… 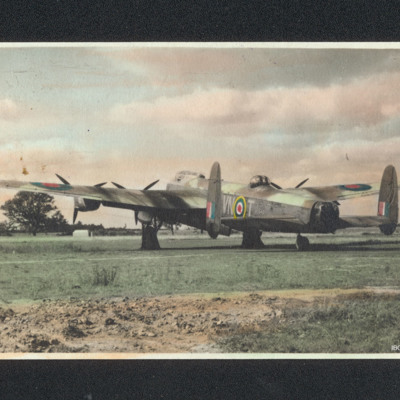 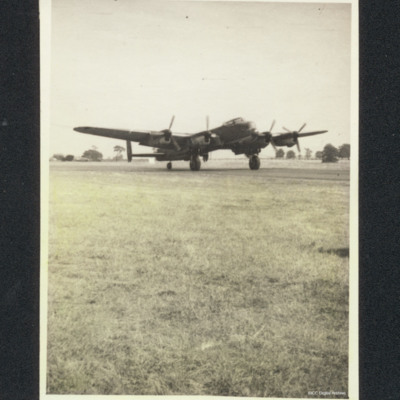 Front quarter view of starboard side of Lancaster on concrete surface with grass in foreground. On the reverse 'Waddington 1945, adapted for grand slam bomb 22000 lb, AVC'. 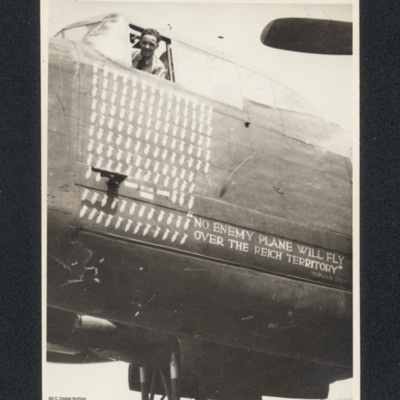 View of cockpit area and part of forward fuselage of a Lancaster with a man looking out of open cockpit side window. Below the cockpit 137 bomb symbols in 11 rows. To the right of bottom row 'No enemy plane will fly over Reich territory' On the…

Airman in the cockpit of Lancaster View of cockpit and fuselage of a Lancaster LM220 WS-Y with an airman looking out of the cockpit window. On the nose 'Y' and nose art of a cartoon of a leprechaun-like figure with top hat, holding a glass of beer. Captioned 'getting younger every…
View all 68 items