40 items. The collection consists of the service and private papers of Paolo Troglio (b. 1921), an aviere of Regia Aeronautica later attached to the Luftwaffe. Paolo was stationed in Italy, France, Greece, Albania, and on the Russian Front where he became a prisoner of war. He escaped and was posted to a Luftwaffe logistic unit with the rank of Gefreiter. Toward the end of the war, back in Italy, Paolo became an informant for the Resistance, to which he passed military intelligence. The collection comprehends photographs of barracks, aircraft, airfields, ordnance, and his friends in informal settings. There is also correspondence exchanged between Paolo and his family, letters from the 'Italia' partisan brigade, and a pair of Deutsche Afrika Korps googles. The collection also include correspondence about a war damage claim lodged by Angelo Bernabè, whose daughter would later be married to Paolo.

The collection was donated by Sara Troglio and catalogued by IBCC Digital Archive staff, with the valuable assistance of the Archeologi dell'Aria research group (https://www.archeologidellaria.org) and further identification provided by Claudio Gioia. 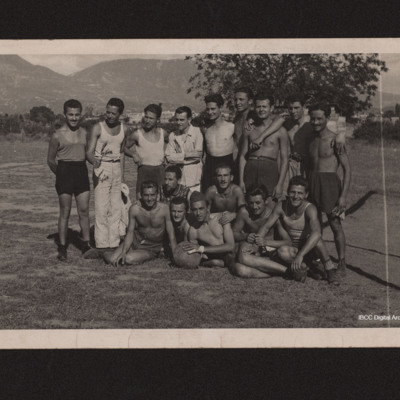 16 men in improvised sports gear are standing or seated on a grass field with a football, with the shadow of a goal post on the right. A tree, some buildings and a barren ridge are visible. Date, place and signatures of the players are on the…

Paolo Troglio and military personnel in a goods wagon 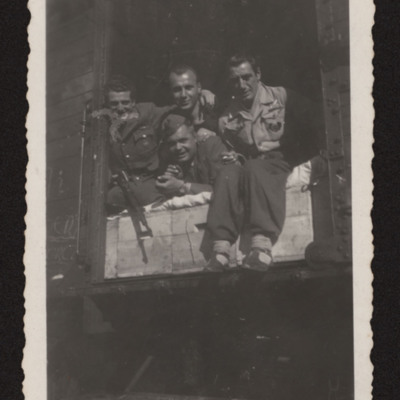 Four men in uniform are in a goods wagon, seated or lying on crates; Paolo Troglio is on the right, his legs dangling out. The barrel of a rifle is visible on the left. 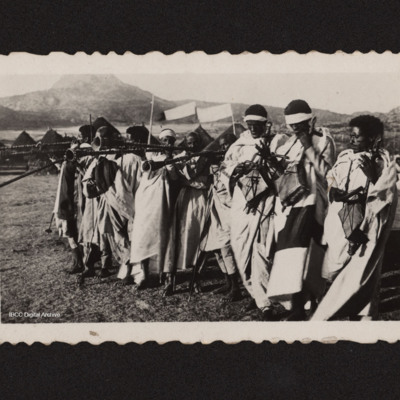 A group of black musicians in white robes are playing wind and string instruments. A series of pointed roof huts are in the background, two with light-coloured flags flying on them. In the background, a barren peak is visible.

Paolo Troglio standing next to a balustrade 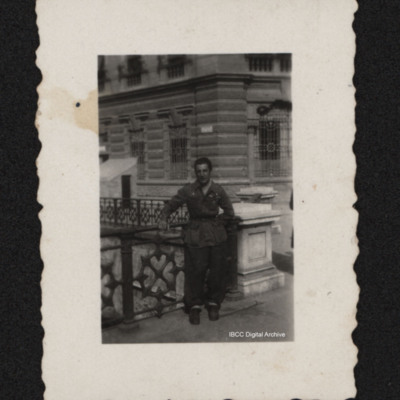 Paolo Troglio is standing next to a stone and iron balustrade. A building with a shelter at street level is in the background. On the reverse: 'B'. 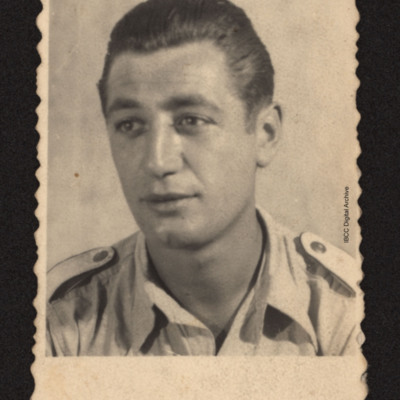 Men in front of a snow-capped peak 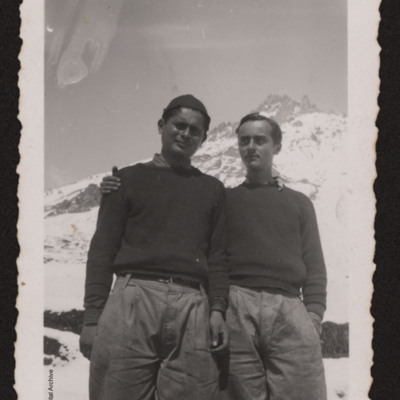 Two men are standing in front of a snow-capped peak. Both are wearing mountain gear consisting of trousers and dark jumpers. The one on the right has put an arm around the other's shoulder.

Paolo Troglio and a donkey cart 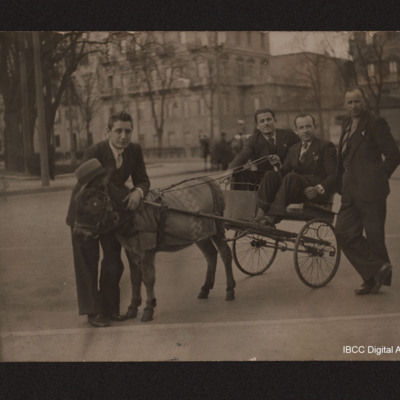 Five men are around a donkey drawn cart, one seated on it holding the reins, while another has placed a hat on the donkey's head. Captioned: 'Torino. Ponte Gran Madre. 31-03-39. Valentino Periani Battaglia Venezia Troglio' 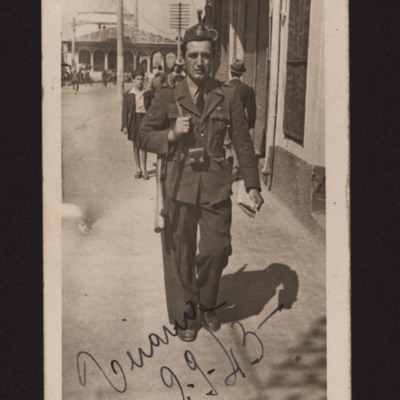 Paolo Troglio walks in uniform along a sidewalk, carrying a bolt action rifle on his shoulder. Part of the Et'hem Bej Mosque is visible in the background. Captioned: 'Tirana - 2-9-43-', on the reverse '271'. 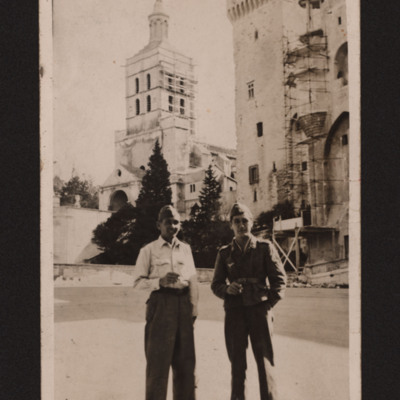 Paolo Troglio and another Luftwaffe member are standing in front of the Avignon Cathedral and the Palais des Papes. On the reverse: 'Questa foto lò [sic] fatta al Castello dei Papa [sic] a Avignon. Paolo. 1944-8-4' 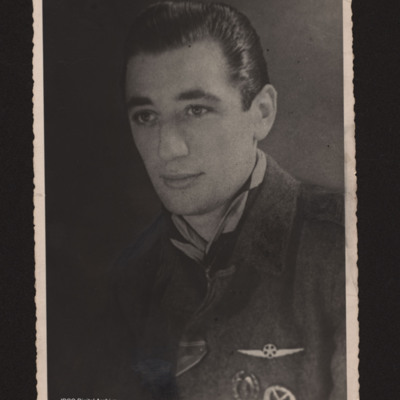 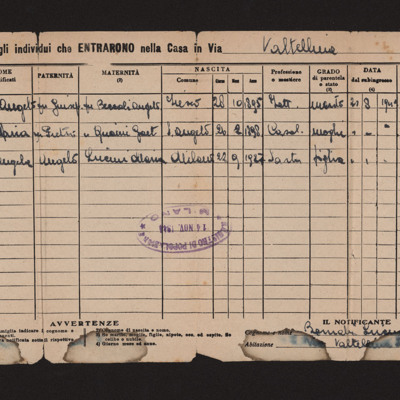 Request to report to the local housing board headquarter 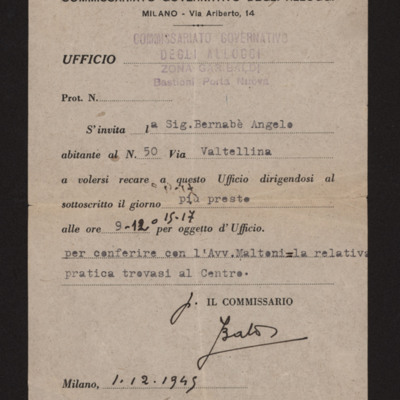 Angelo Bernabe is requested to report to the local housing board headquarter to speak with a lawyer. 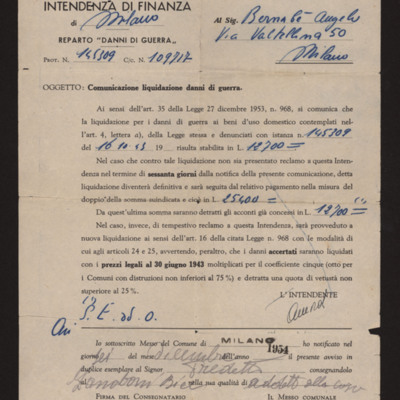 Angelo Bernabè is awarded Lire 12,700 as compensation for wartime damage of his belongings. 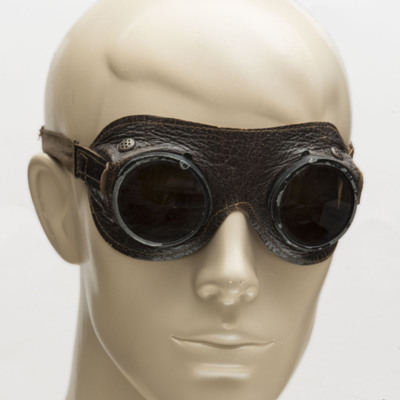 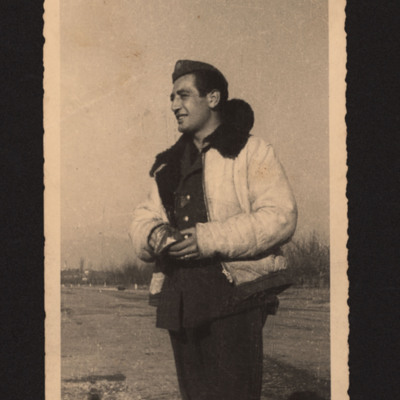 Paolo Troglio standing on a runway wearing uniform with a Kanal flying jacket. He is holding a small pouch in his hands.

Paolo Troglio in front of a SM.81 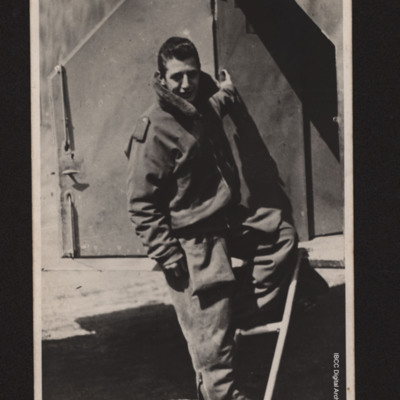 Paolo Troglio, in flying gear, is on the ladder of a SM.81 looking straight at the camera. He is carry a small bag round his waist whilst holding onto the aircraft port door handle with his left hand. 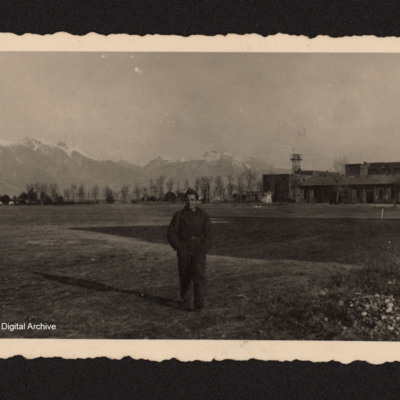 Paolo Troglio is standing on an grass airfield, behind him are a low building with a mast and a lattice tower. A line of tree and a snow-capped mountain range can be seen in the distance.

Paolo Troglio and personnel in front of an hangar 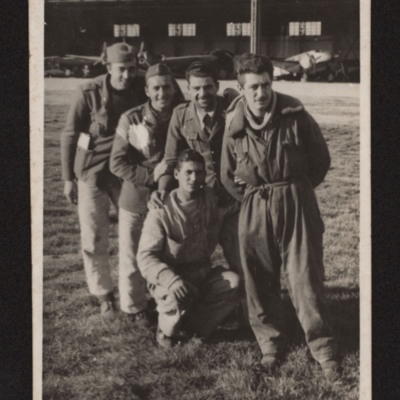 Five airmen, in combinations of dress uniform and flying gear, are standing or crouching on the grass in front of an hangar. Aviere Paolo Troglio, in overalls, is the first from the right. In the background some aircraft are parked under a canopy,…

Paolo Troglio on a SM.81 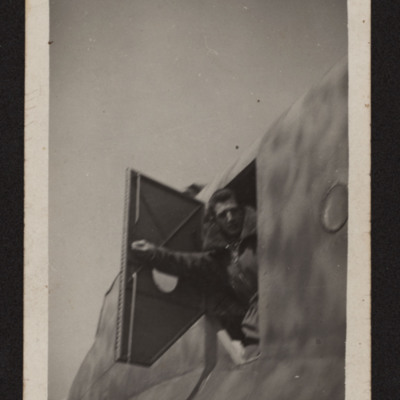 Paolo Troglio is stretching out the port side door of a SM.81, holding with his right arm to the handle. He is wearing a overall with a fur collar. 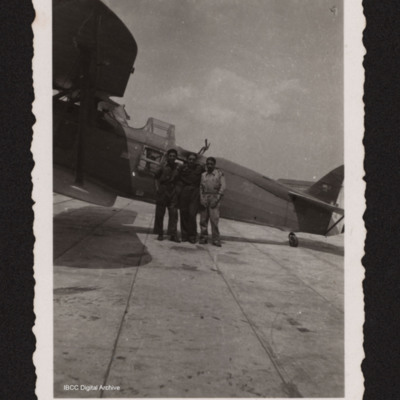 Three in various uniforms are standing in front of the port side of a Ro.37, parked on a hardstand. A side panel of the aircraft has been removed.

Six uniformed men standing in front of a building 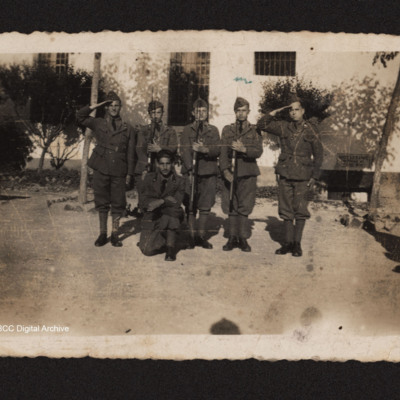 Five of the uniformed men are standing, with two saluting, three holding rifles and one crouched down in front of the other men. On the reverse: 'Ricordo di guardia sono quello che era segnato a letto [undecipherable]', plus numbers and a…

Man on a river bank 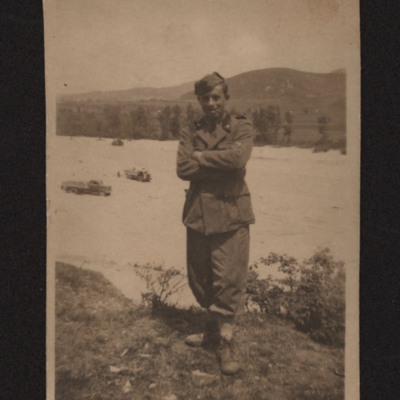 A man in uniform with arms folded is standing on a river bank. Two lorries can be seen in the background, on a dry river bed. Hills and trees in the distance. On the reverse: 'ricordo del vostro parente Angelo in terra Greca' 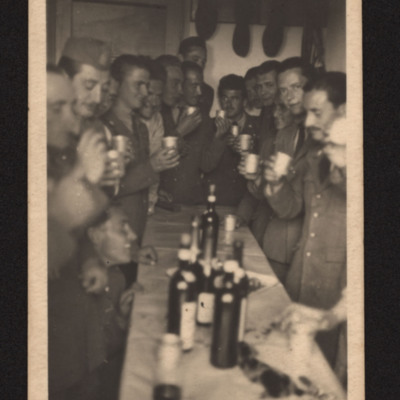 A crowd of uniformed men are gathered around a bar, with bottles on top. Each man is holding a cup and it seems that a toast has just been given.

Paolo Troglio walking a dog and a duck 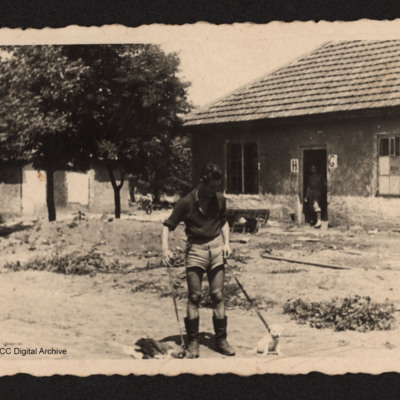 Paolo Troglio in shorts and shirt with rolled-up sleeves walks a puppy and a duck on leads. A tree and a building with the letters H and G are in the background. On the reverse: 'Stalino
15-7-43
il mio cagnolino e un'oca' 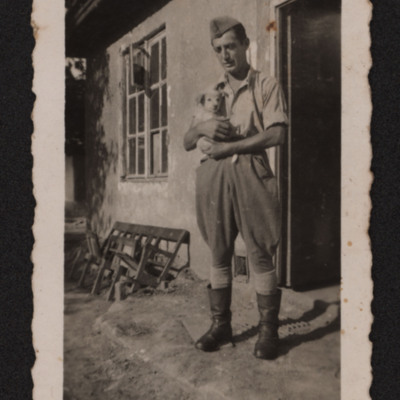 Paolo Troglio, casually dressed although wearing a uniform hat and heavy boots, cradling a puppy in his arms. He is standing outside a building . On the reverse: 'Milano 22-12-42' and 'E 453'.
View all 40 items