27 items. The collection concerns James Wrigley (1920 - 2010, 1029740 Royal Air Force) and contains an interview with his widow, Alice Wrigley, photographs, his log book, decorations, and a photograph album of his service in the UK and and Far East. The collection also contains a log book made out to Rascal, his mascot or lucky charm. James Wrigley completed 47 operations as a wireless operator with 97 and 635 Squadrons.

The collection has been donated to the IBCC Digital Archive by Susan Higgins and catalogued by Barry Hunter.

James Wrigley's Widow discusses her husband and his life in RAF.

This item was provided, in digital form, by a third-party organisation which used technical specifications and operational protocols that may differ from those used by the IBCC… 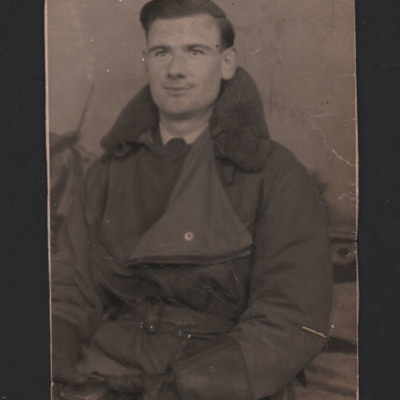 Half-length portrait of James Wrigley wearing a Sidcot suit. On the reverse is 'All at From Jimmy x x x x' 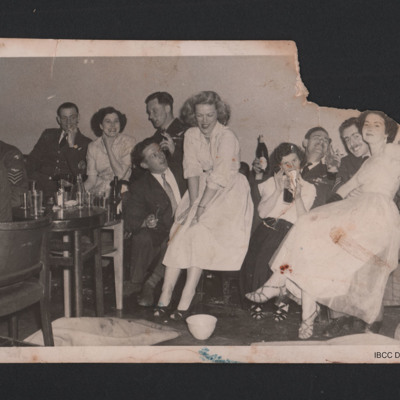 A group of men and women seated around tables. Beer bottles and glasses are being held by some. One table has several glasses and bottles. One corner of the photograph has been torn off. 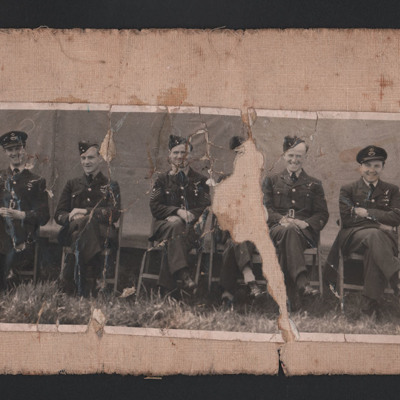 Seven seated airmen, all with their arms crossed. The photograph damaged and has been stuck to a section of a map. 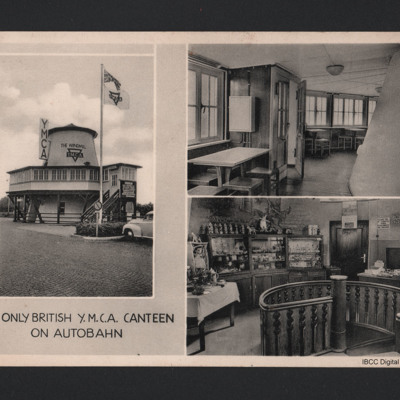 A card with an exterior and two interior images of a building, captioned 'The Only British Y.M.C.A. on Autobahn'. 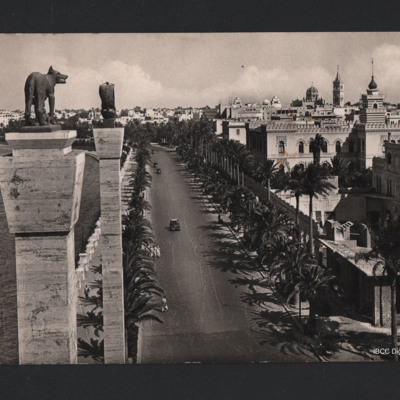 A postcard taken from a roof looking along a street with on one side the sea and on the other buildings and palm trees. The card is addressed to 'The kids c/o Mrs Wrigley' at RAF Hemswell. 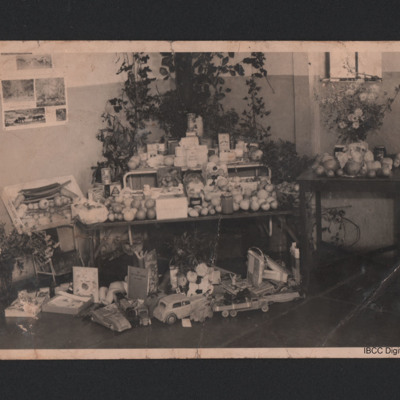 Two tables laden with fruit and vegetables. Arranged in front are some toys and books. On the table and behind are also vases of flowers. 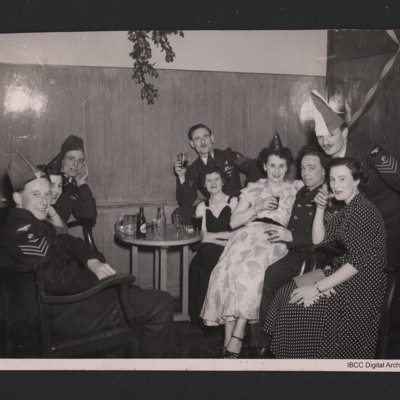 The group is seated round a round table. They are holding glasses and the table has more glasses and bottles.

A postcard of an arab leading two camels on a sandy desert. Behind are palm trees. On the reverse is a message to James Wrigley's wife. 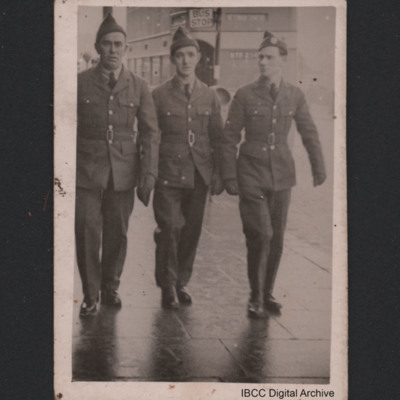 Three airmen walking down a wet street. Behind is a bus stop and a double decker bus. On the reverse is a description of the weather and his two colleagues. 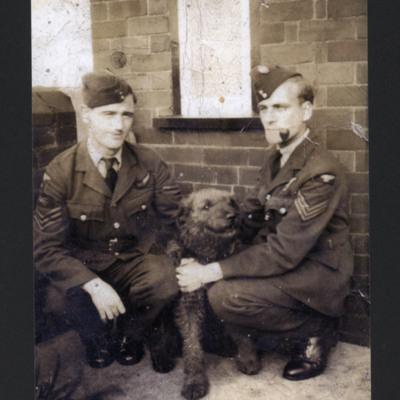 The two sergeants are crouched with a dog between them. One man is smoking. On the reverse 'Ted Pack and Self Lindholme 1943'. 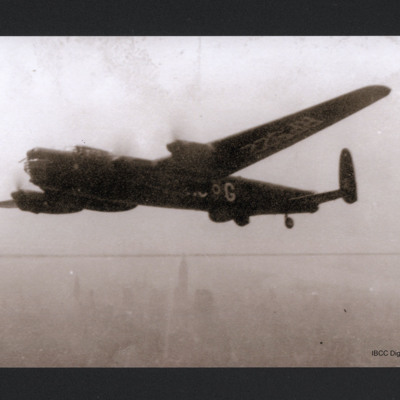 An air to air image of a Lincoln, RF522 'G' over New York, with the Empire State building in the background. 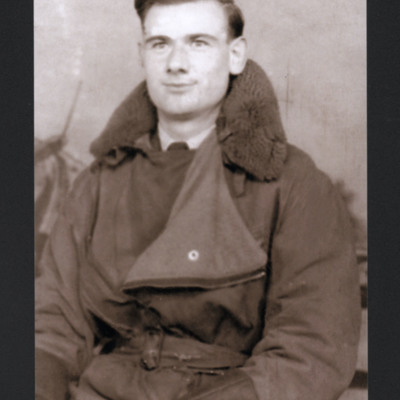 Half-length portrait of James Wrigley wearing a Sidcot suit. On the reverse 'Yatesbury 1941'. 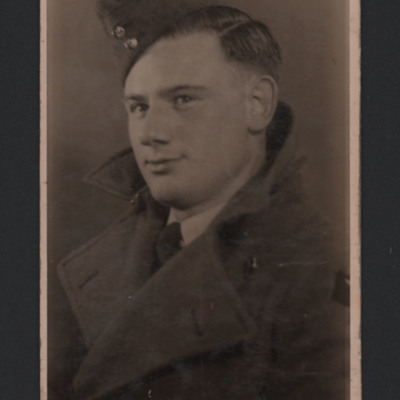 A head and shoulders portrait of James Wrigley. He is wearing a great coat and a side cap. On the reverse 'Hamilton'. 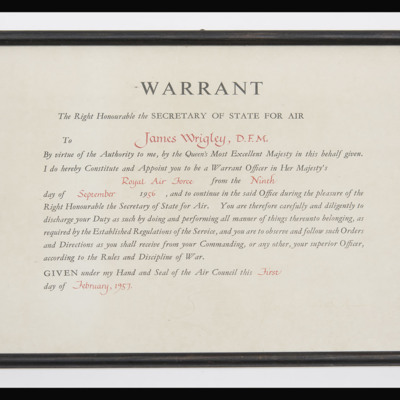 The warrant appoints James Wrigley as a Warrant officer in the Royal Air Force. 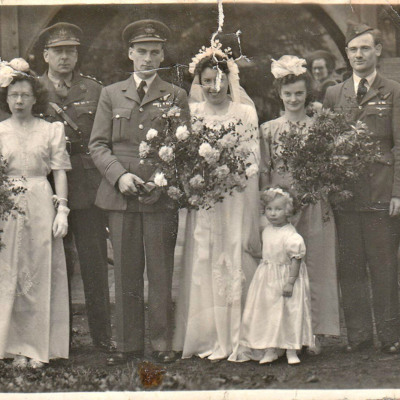 Bride, groom and nine others forming the bridal party. Groom and one man in airman's uniforms and one older man is an Army officer. 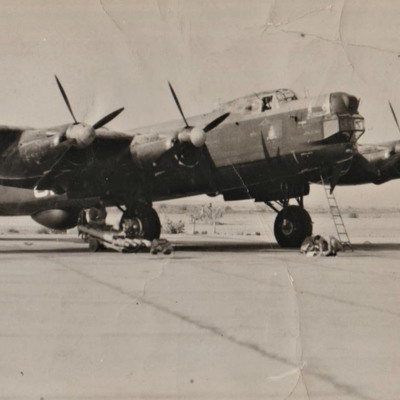 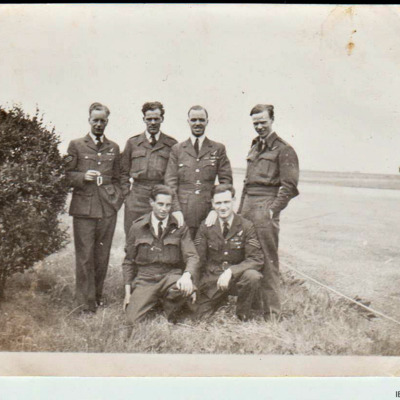 Two airmen kneeling with four airmen standing behind. One man, a sergeant, is smoking. 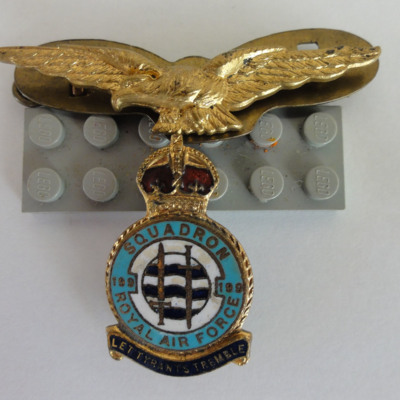 Metal/enamel eagle badge for 199 Squadron with a Lego brick. 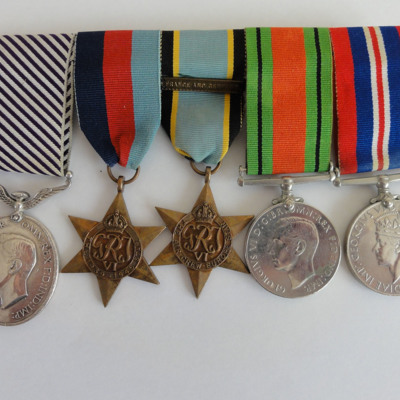 Medals awarded to James Wrigley - Distinguished Flying Cross, 1939-45 Star, Air Crew Europe Star with clasp for France and Germany, Defence Medal and War Medal 1939 to 1945. In addition is a Bomber Command Clasp, an Italy Star and an Unofficial…

Half-length portrait of a woman. 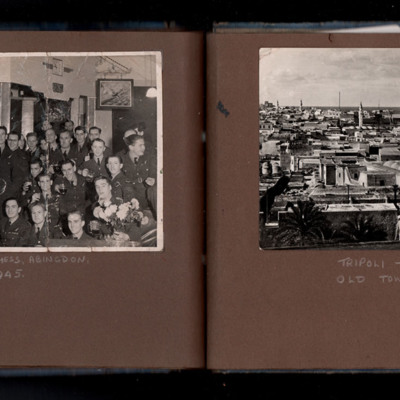 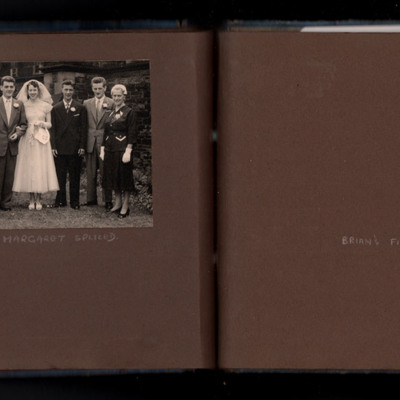 Bride and groom standing outside the church with six other people. It is captioned 'Geof [sic] & Margaret spliced'.
A second photograph is missing but the caption reads 'Brian's first communion'. 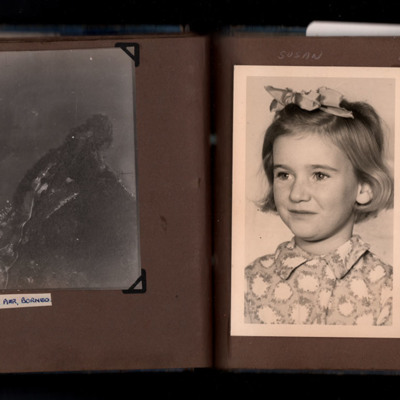 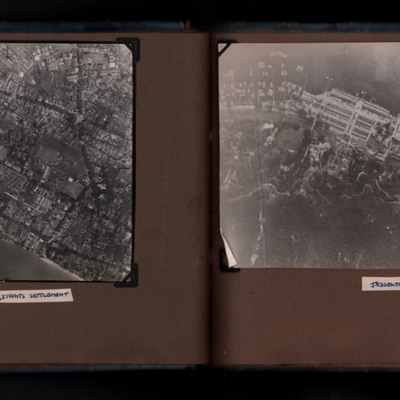