Additional information on William Frederick Burkitt is available via the IBCC Losses Database.

The collection has been loaned to the IBCC Digital Archive for digitisation by Hilary Crozier and catalogued by Trevor Hardcastle. 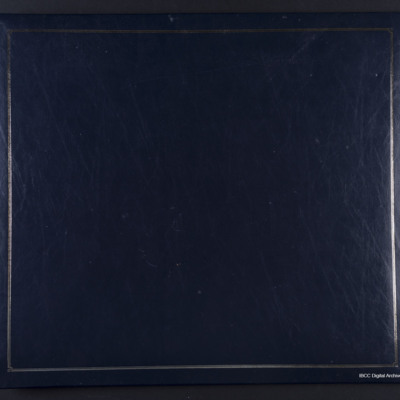 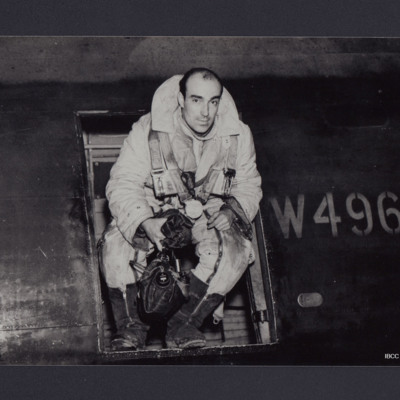 An airman in flying clothing in the entrance door of Lancaster W4964, annotated on the reverse 'Sgt John Joseph Zammit probably an American in the RCAF'. 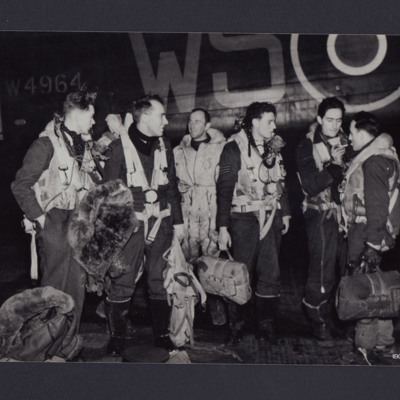 Six men of William's crew, in flying clothing next to the entrance door to Lancaster W4964 with squadron code WS. 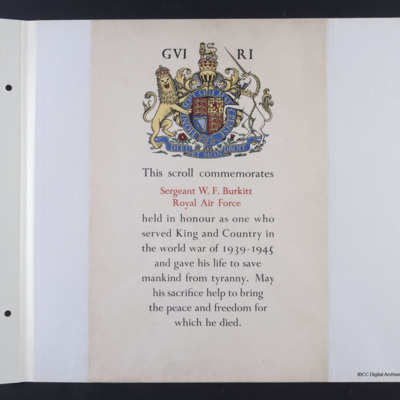 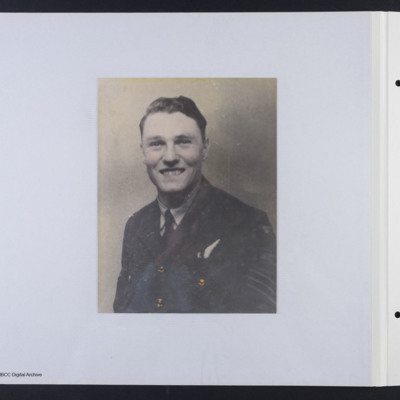 Head and shoulders portrait of William in uniform with sergeant's stripes and flight engineer brevet. 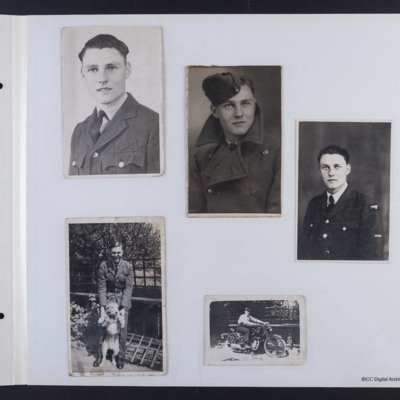 Five photographs first three head and shoulders of Wiliam Burkitt as an airman, third as an LAC fourth with a dog has a garden background, fifth sitting on a motorcycle. 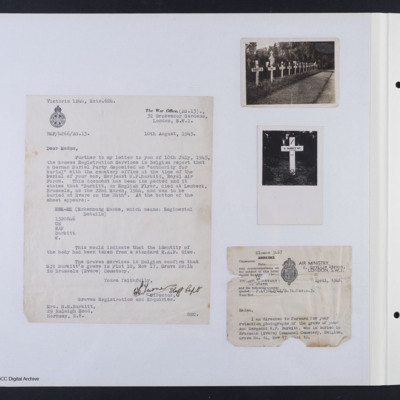 - Letter from War Office dated 10 August 1945, to William Burkitt's mother, confirming to her that he had been buried in a cemetery near Brussels.

- A letter from the Air Ministry dated 6 April 1948, forwarded with two… 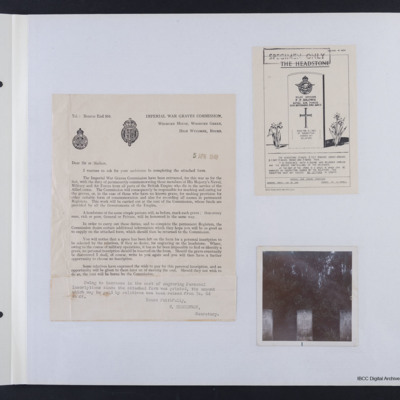 Standard form letter sent to family of deceased servicemen describing the details of the standard headstone and attaching a form to complete for a personal inscription. Also is an illustration of a typical headstone.

There is also a photograph of… 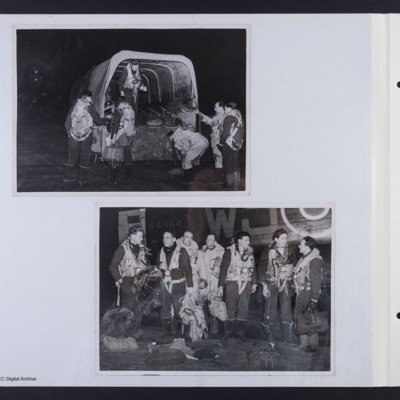 Two photographs:
- one of aircrew at night, being collected or dropped off at the dispersal.
- second, also at night, is of a crew in flying gear gathered around entrance door of Lancaster (W4964 squadron code WS). 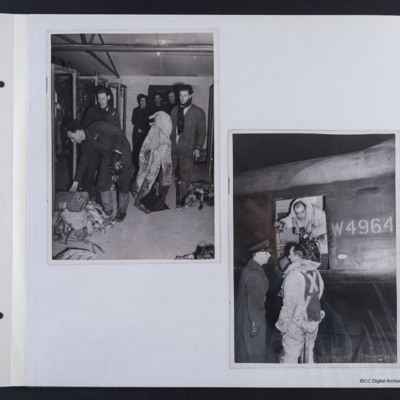 Two photographs:
- one of aircrew collecting and putting on their flying clothing and parachutes,
- second of two aircrew in flying clothing: one looking out from entrance door of Lancaster W4964, one standing outside talking to an officer not in… 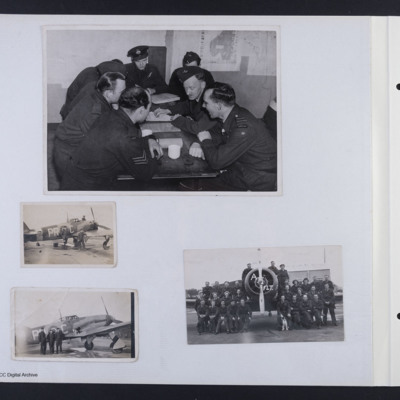 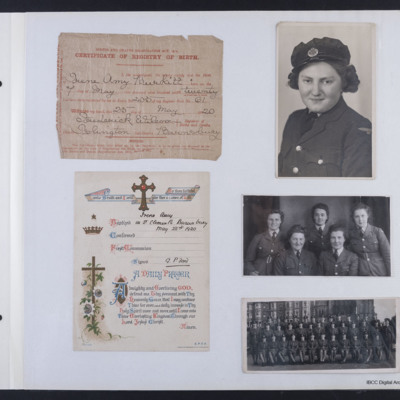 Also three photographs of WAAFs - one head and shoulders, one of a group of five, the third is a formal course photograph during training. Posed in three rows in front… 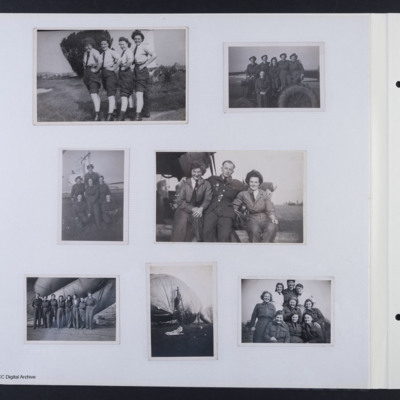 Album page, seven photographs of groups of WAAFs, two with a barrage balloon in the background. 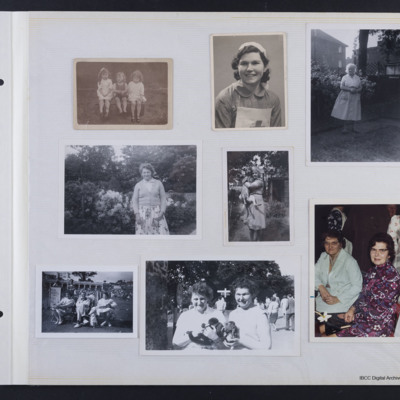 Album page, eight photographs, predominantly of women, a later one is in colour. 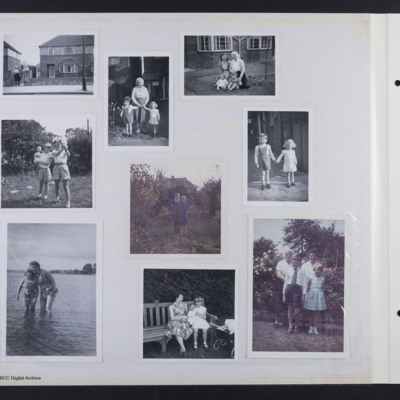 Album page nine small photographs recording two children, a boy and a girl, in their early years, one outside a semi-detached house , some in the garden and one paddling.

Hilary’s uncle, William Frederick Burkitt (known as John), was born in North London. He joined up in October 1943 and after training as a flight engineer, was sent to RAF Bardney. During their first operation they were badly hit and the rear…
View all 16 items