35 items. The collection concerns John Jericho Blair DFC (1919-2004). He was born in Jamaica and served in RAF from 1942-1963. He flew a tour of operations as a navigator with 102 Squadron from RAF Pocklington. The collection includes numerous photographs of him and colleagues, several photographs of Jamaica, a document detailing his life and an interview with his great nephew Mark Johnson.

The collection has been loaned to the IBCC Digital Archive for digitisation by Mark Johnson and catalogued by Barry Hunter.

A 52 page document detailing the history of John Blair's RAF service from 1942 to 1963, and his childhood in Jamaica. Introductory note says it was based on a taped interview with John Blair by his nephew in 1997.
John was born in 1919 to a poor…

Head and shoulders of a nurse titled 'Senior Flight Sister Margaret Kirkham on duty aboard a Hastings aircraft'.

Three men, including John Blair, studying a map on the table in front of them, one is wearing a civilian suit and the furthest is an officer in dress uniform. Caption: 'Briefing – (John right)'. 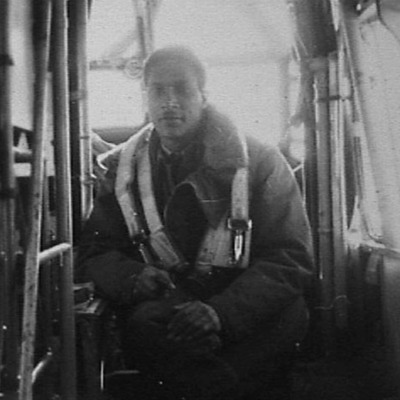 John Blair in flying gear and parachute harness inside a bomber, captioned 'John inside bomber'.

John Blair and his catch 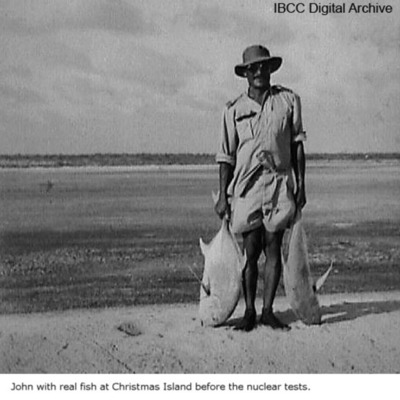 John Blair standing in desert style uniform and a hat holding two large fish by the tail. Caption: 'John with real fish at Christmas Island before the nuclear tests.' 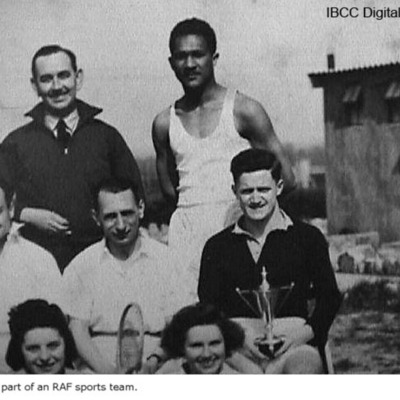 John Blair and six airmen and airwomen in various sportswear, one holding a trophy. Caption: 'John as part of an RAF sports team.' 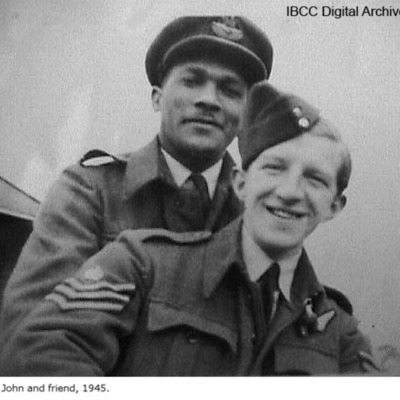 John Blair (left) with an officer’s cap and a colleague (right) who has the insignia of a flight sergeant visible on his right arm, brevet is partially covered. Caption: 'John and friend – 1945'. 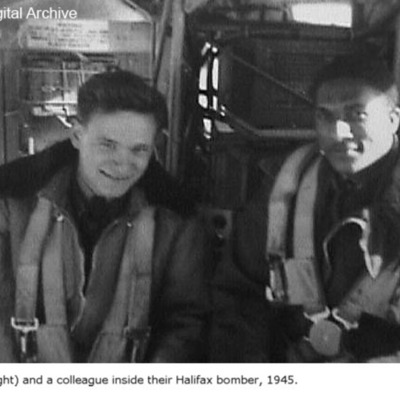 Two airmen in flying gear at the navigator’s station in a Halifax bomber. Caption: 'John (right) and a colleague inside their Halifax Bomber, 1945'. 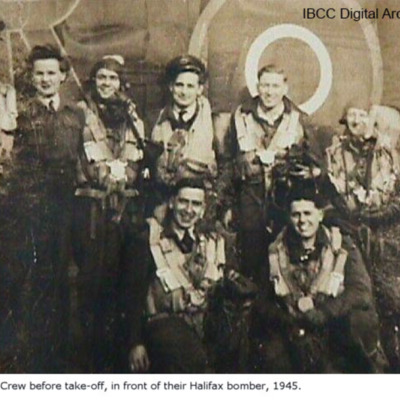 Eight RAF personnel, seven in flying gear (8th is a WAAF) standing beside an aircraft, John Blair is on far left. Caption: 'The Crew before take-off, in front of their Halifax bomber, 1945.'

Photograph has been double exposed [film failed to…

John Blair as a cadet seated sideways to the camera, caption at bottom reads 'John in a moment of relaxation. Note the “Jamaica” shoulder flash.'

Group of fifteen airmen, seven of whom have cadets' caps. All are in flying gear and they are grouped in three ranks beside an Avro Anson, John Blair is at the far left of the photograph, caption at bottom reads; 'John Blair (standing at left) and… 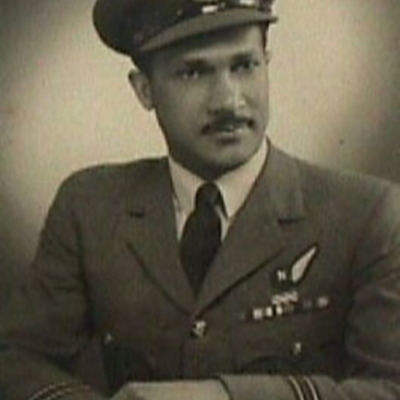 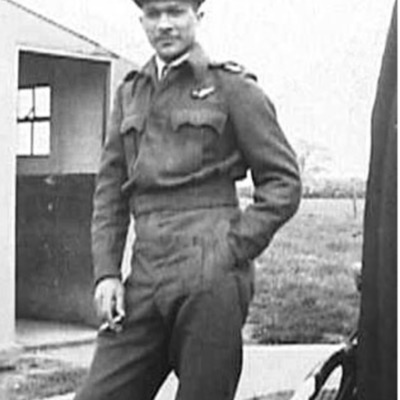 Three quarter length portrait photograph of John Blair in fatigue uniform with navigator’s brevet, and officer’s cap, standing between two huts smoking a cigarette. A bicycle is propped up beside one of the huts. Caption at bottom reads: 'John… 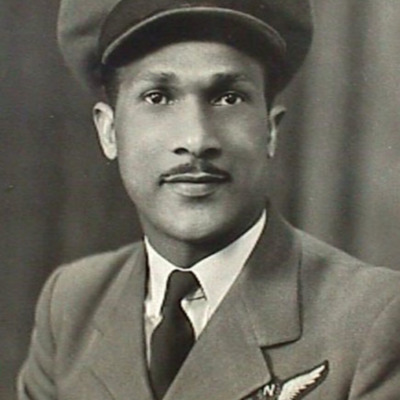 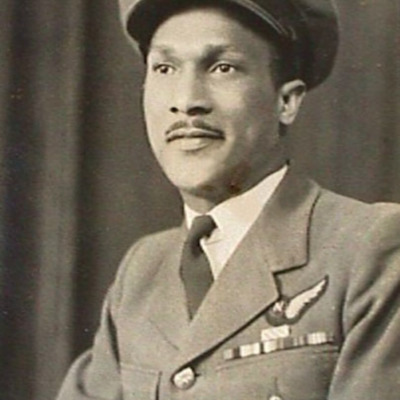 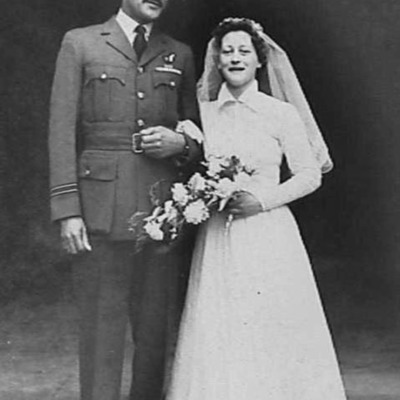 John Blair and his bride. The groom is wearing Flight Lieutenant’s uniform with navigator’s brevet. The bride is in a white dress with short veil and bouquet. Caption at bottom reads: 'John Jellicoe Blair & Margaret Eileen Kirkham – March 1,…

John Blair standing with Leo Balderamos on a tall building with a cityscape in the background. 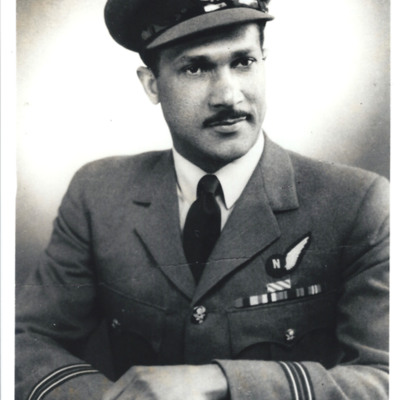 Flight Lieutenant John Blair in uniform with Navigator's brevet, submitted with caption; 'Flt Lt John J Blair, DFC from Jamaica who served as a Halifax navigator with 102 (Ceylon) Squadron, Bomber Command between 1944 and 1945. He completed his full…

Couple in car. Woman in a wedding dress, holding a bouquet, sitting next to Flight Lieutenant A Wint, in uniform. Submitted with caption: 'Norma and Arthur Wint at their wedding in England, 1945. Flight Lt. Wint, from Jamaica, was an RAF pilot…

Airmen in three ranks, all but two of whom are cadets, two are labelled: 'Blair' and 'Lynch'.

Submitted with caption: 'Caribbean aircrew trainees, Canada, 1942. John Blair is standing, 2nd from left in the middle row, while Orville Lynch is at the…

Young woman in school uniform, she is holding a pair of glasses in her left hand, standing in front of a door. Submitted with caption: 'A typical Jamaican schoolgirl, mid 1940s.'

Full-length photograph of M Johnson’s father as a child, with his right foot placed on a low wall. Submitted with caption; 'A typical Jamaican schoolboy (in this case, the author’s father), mid-1940s.' 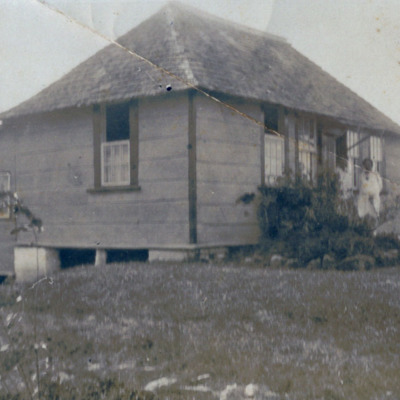 Bungalow with lower level, submitted with caption: 'The Teacher's Cottage in rural Jamaica that John Blair once lived in as a child.'
View all 35 items