The collection has been donated to the IBCC Digital Archive by Alexander Gilbert and catalogued by Barry Hunter. 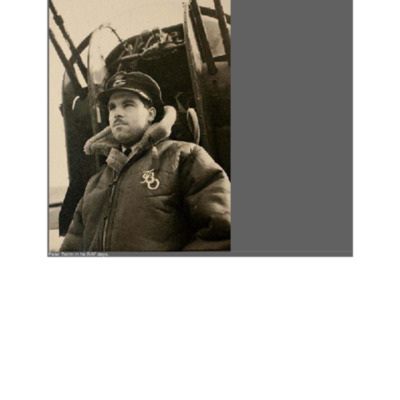 A brief obituary of Peter. During the war he was awarded a DFC for bravery. He was proud of his wartime record and for a time was president of his local British Legion. An article about Peter and others with reference to Dresden.

12 Airmen and Lancaster 'A' 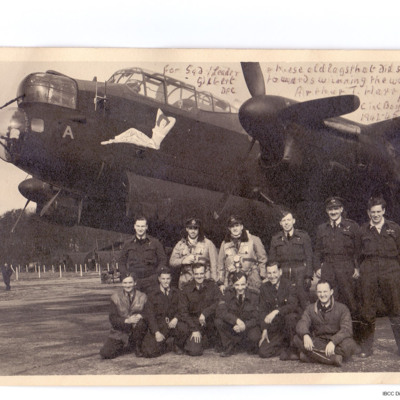 12 airmen arranged in two rows at the port side of the front of Lancaster 'A'. The nose has a painted lady in a long skirt and a bikini top. Annotated on the image is 'For Sqd/Leader Gilbert DFC. These old lags that did so much towards winning the…

Blood-Red Pall over the Heart of Nazi Germany 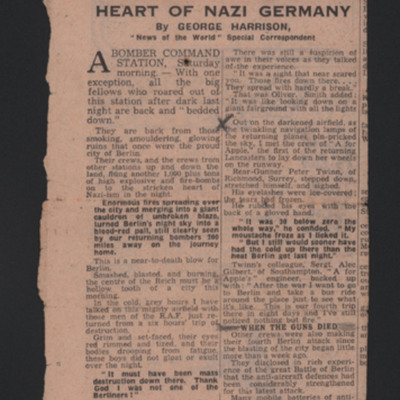 A newspaper cutting referring to an attack on Berlin. Peter Twinn and Alec Gilbert have been quoted with comments on the cold and the fires in Berlin. 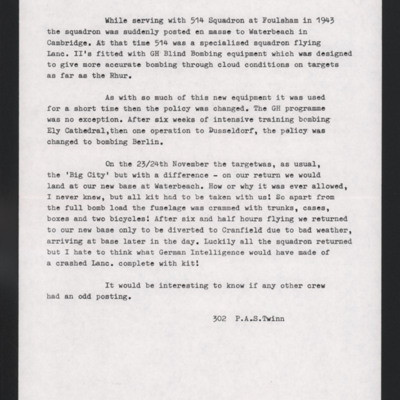 A description of an operation over Berlin when the crew had to travel with all their personal kit because they were transferring to a new airfield. 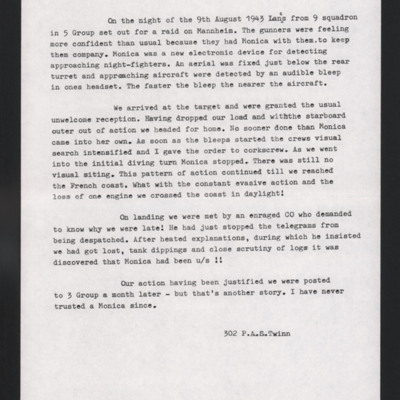 A story about false signals from Monica radar. 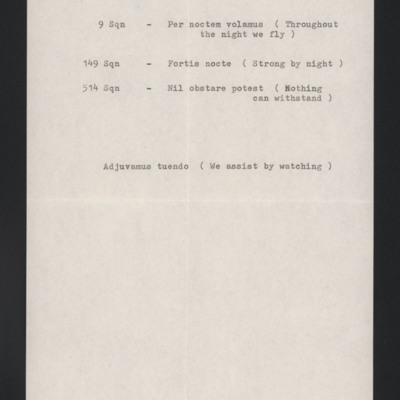 Three squadrons identified with their Latin mottos and English translation.

Letter to Gilbert from Arthur Harris 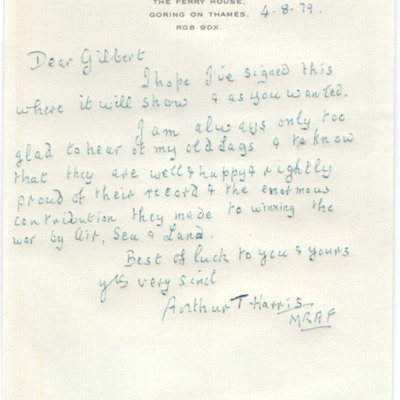 A letter to Alexander expressing pleasure at receiving his letter. 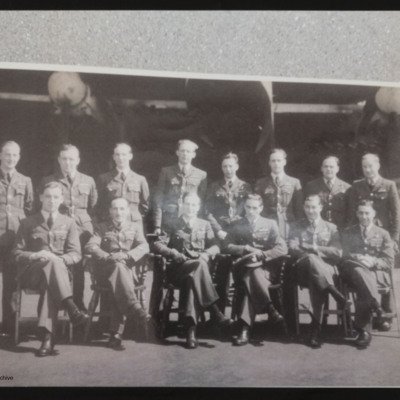 The 14 men are arranged in two rows in front of an open hangar. Inside the hangar is a Lancaster. 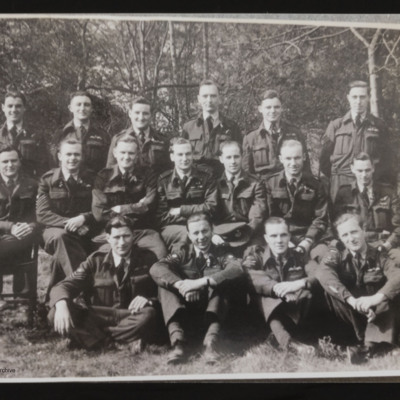 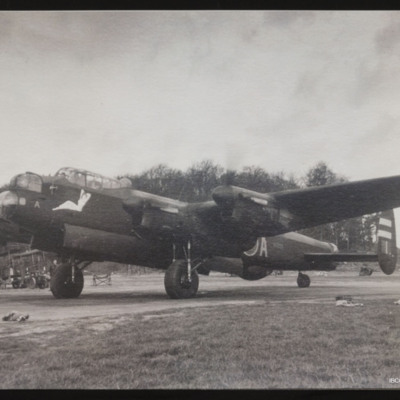 A port side view of Lancaster 'A' with its engines running on dispersal. On the nose is a reclining woman. On the ground are three discarded items. The double flashes on the tailplane indicate this is a Gee-H leader in 3 Group.

18 Airmen and a Lancaster 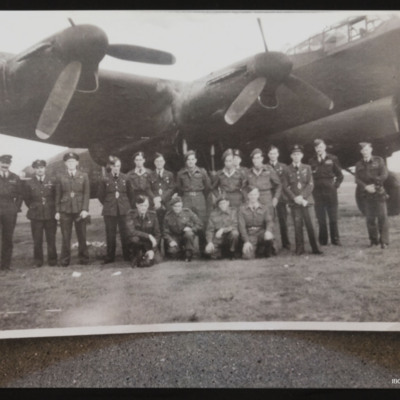 18 men arranged in two rows at the side of a Lancaster. 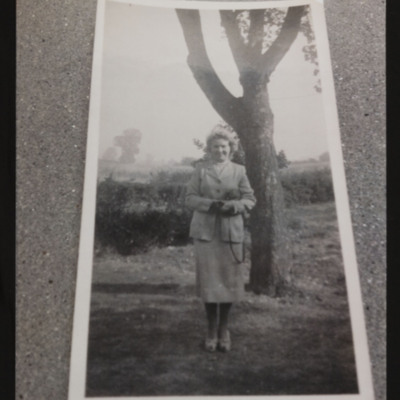 A woman standing beside a tree in a park.

Woman with a Child 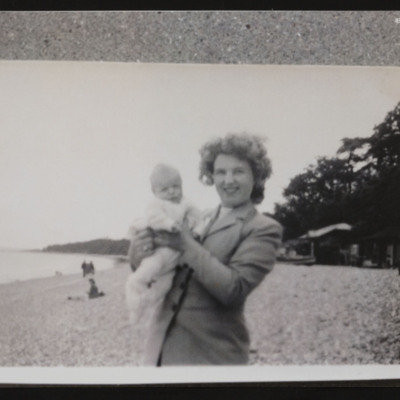 A young woman is holding her baby. They are on a beach. 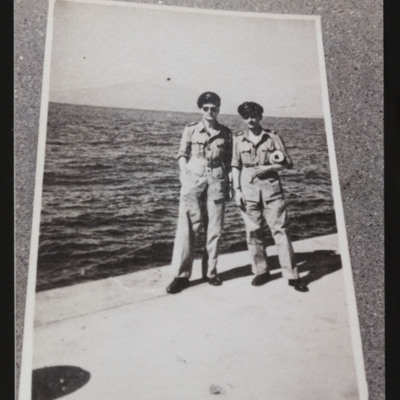 The two airmen are in khaki at the side of the sea. One is carrying a rolled up towel. 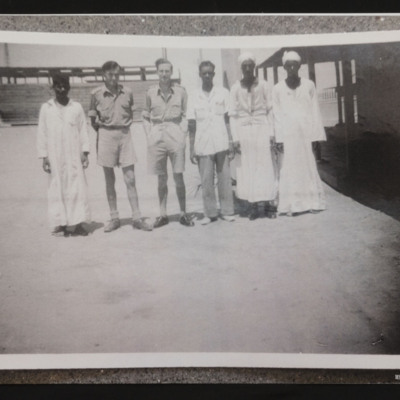 The two airmen are in khaki and shorts. The six men in a line. 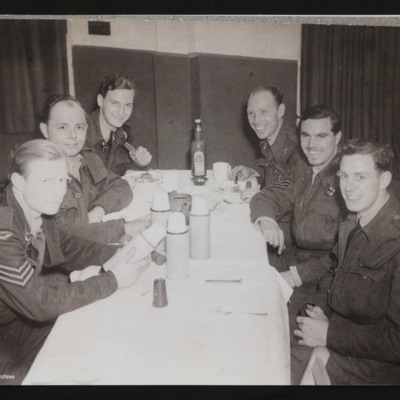 Six airmen eating round a table. There are thermos flasks and a torch on the table. 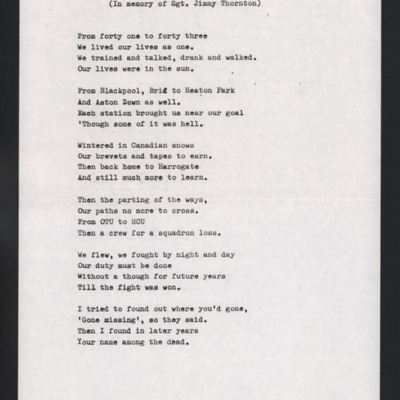 A poem about a colleague who was missing in action. 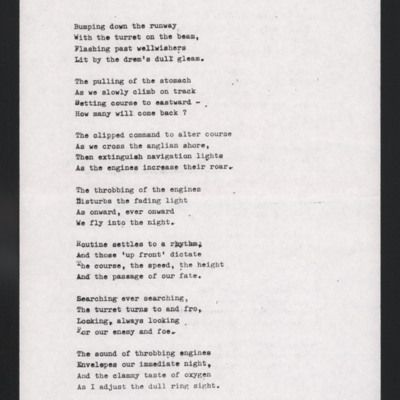 A poem about flying operations.

Navigator’s, air bomber’s and air gunner’s flying log book for A C Gilbert, flight engineer, covering the period from 16 June 1943 to 3 July 1956. Detailing his flying training, operations flown and instructor duties. He was stationed at RAF…