31 items. The collection concerns Flight Lieutenant Geoffrey John 'Johnny' North, DFC, (173836, Royal Air Force) who served as a rear gunner on 428, 76 and 35 Squadrons flying Wellington, Halifax and Lancaster. He was called up in 1940 from his job as a tailor in Saville Row where he returned after the war. He was shot down on an operation to Duisburg on 21 February 1945. The collection contains his logbook, an account of his shooting down, capture and time as a prisoner of war, including documentation, forced march to another camp in 1945, liberation and repatriation. The collection includes membership documents for Royal Air Force Association, Pathfinders Association and Caterpillar Club as well as personnel documentation, Pathfinder badge correspondence and photographs of crew and squadron as well as other memorabilia.

The collection has been donated to the IBCC Digital Archive by Carole Bishopp and catalogued by Nigel Huckins. 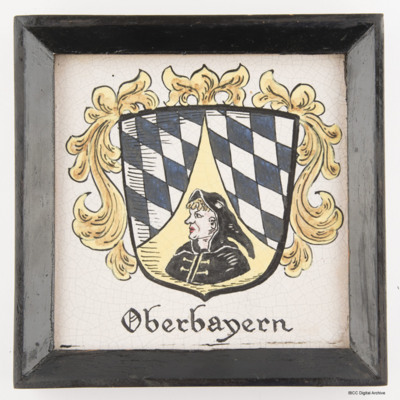 Shield shape with black and white check pattern inside and hooded figure looking left at the bottom. Surrounded by gold scroll work. 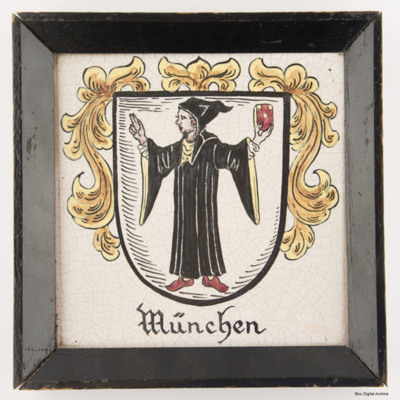 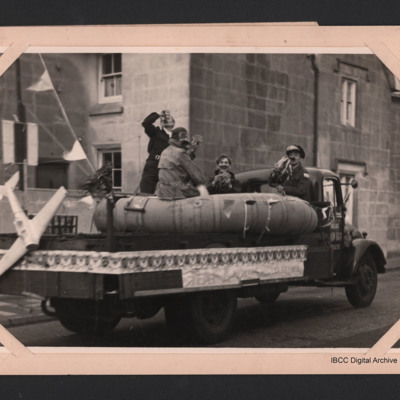 A flatbed lorry with a dinghy on the back with four men in uniform sitting inside, one wearing goggles, one drinking and another with playing cards. On the back of the lorry a model of a single engine aircraft. In the background a town building. On… 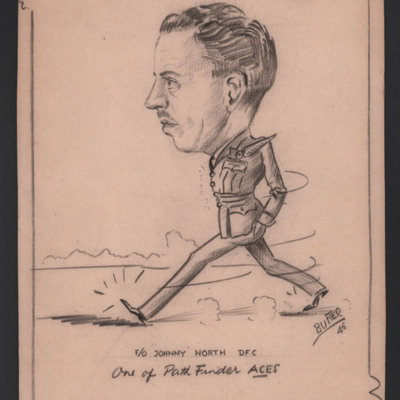 Caricature of a man in uniform striding to the left with hands in pocket. Caption 'F/O Johnny North DFC, one of Path Finders Aces, Johnny North goes south - (Crafty 48")'. 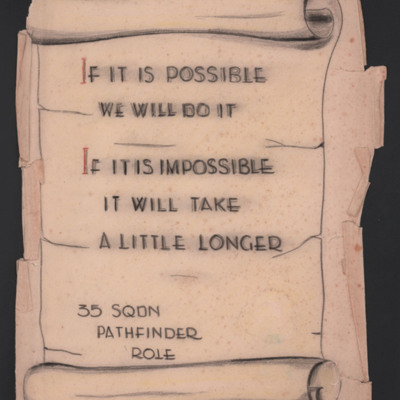 Drawing of parchment scroll with motto about possible and impossible . 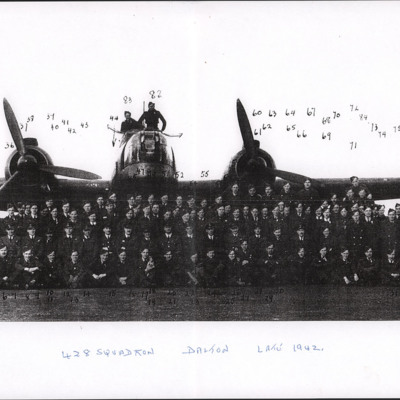 A squadron group of Royal Air Force personnel sitting and standing in rows in front of a Wellington. There are two men standing up through the cockpit roof of the aircraft. A number of personnel have numbers appended above or below them. On the… 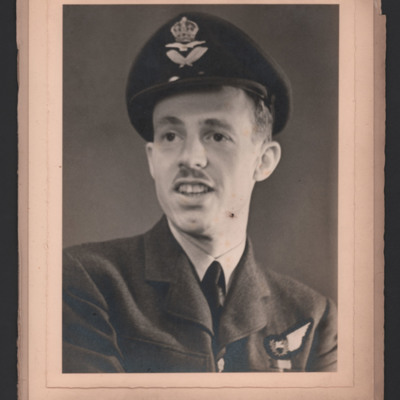 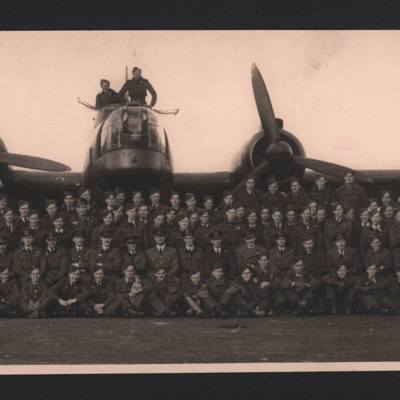 A squadron group of Royal Air Force personnel sitting and standing in rows in front of a Wellington. There are two men standing up through the cockpit roof of the aircraft. On the reverse the title '428 Squadron 1943, Dalton, Feb 1943'. Statements on…

Forty aircrew in five rows wearing tunic and side caps. In the background the end of a hut with slatted window. Names captioned at the bottom. On the reverse notes on subsequent history of several people in the photograph. Photograph was supplied by…

Seven aircrew in front of a Lancaster 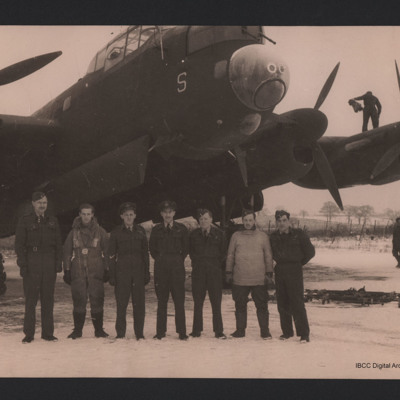 Seven aircrew standing in line wearing various clothes in front of a Lancaster with bomb doors open. Geoffrey North is second from left. The ground has a light covering of snow. There is a man standing on the port outboard engines and another walking…

Note on prisoner of war experience 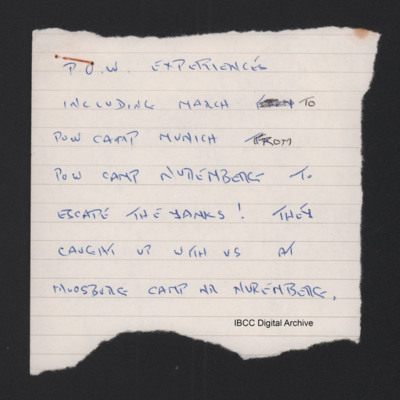 List events including march, location of camps and other events. 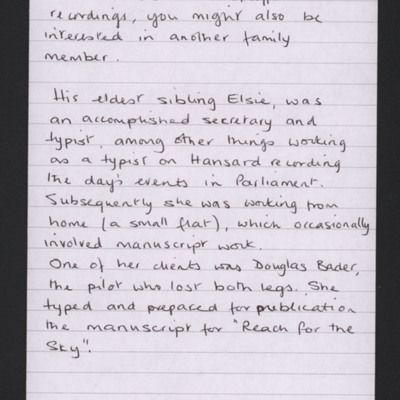 Notes that Geoffrey North's eldest sibling, Elsie who was involved in manuscript work and typed and prepared for publication the Manuscript of 'Reach for the Sky' concerning the life of Douglas Bader. 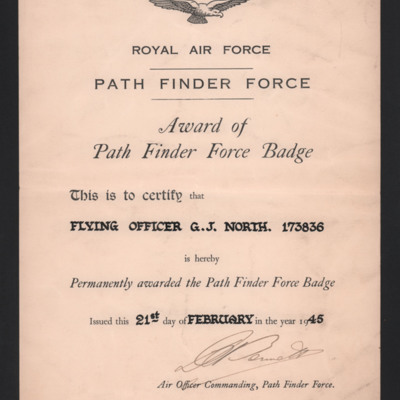 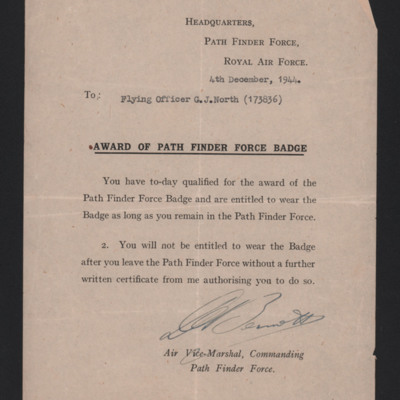 Letter from Headquarters Pathfinder Force to Flying Officer G J North that he has qualified for the award of the path finder Force badge. Notes that badge can only be worn while he remains in Pathfinder force. Signed by Donald Bennett. 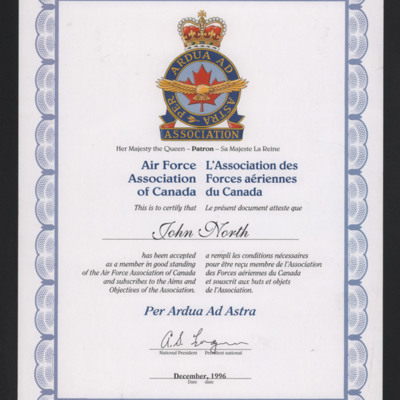 Certificate stating that John North has been accepted as a member in good stranding of the Air Force Association of Canada. 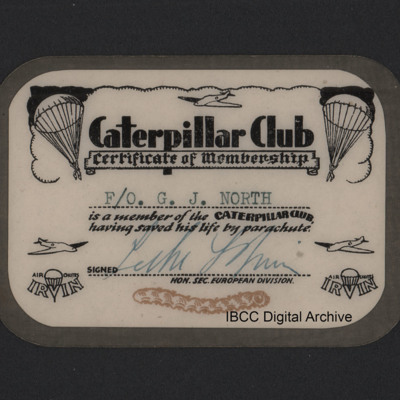 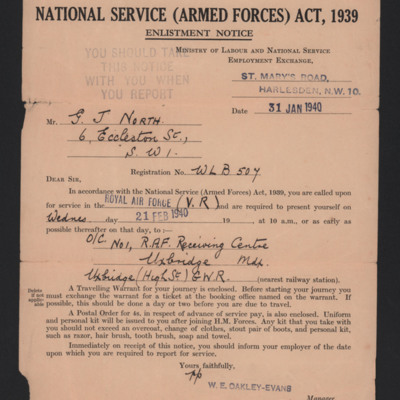 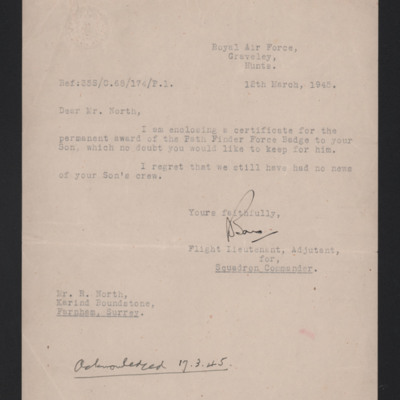 Letter to R North from RAF Graveley covering enclosure of certificate for permanent award of Path Finder Force badge. Note of regret that there is no new of his son's crew. 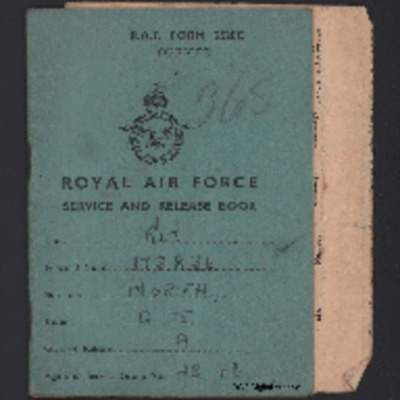 Prisoner of war Personalkarte for North 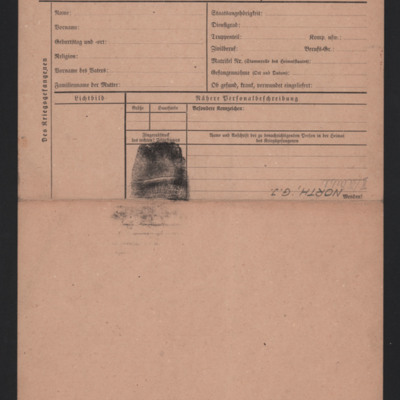 Card with name 'North' and a fingerprint. No other details filled in. 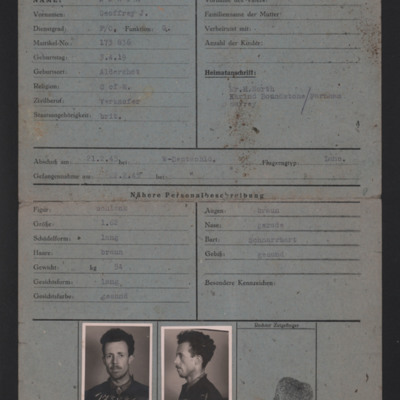 Time based navigators log of operation to Bochum on 13 May 1943 completed by navigator Sergeant Bush. 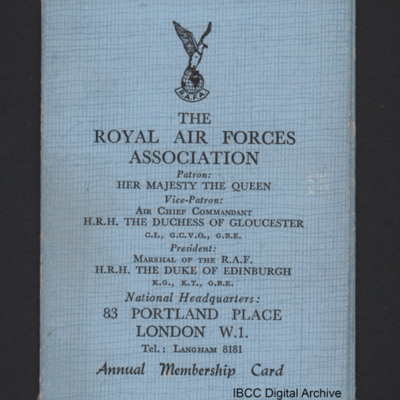 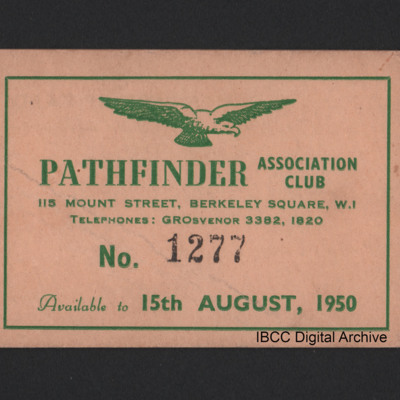 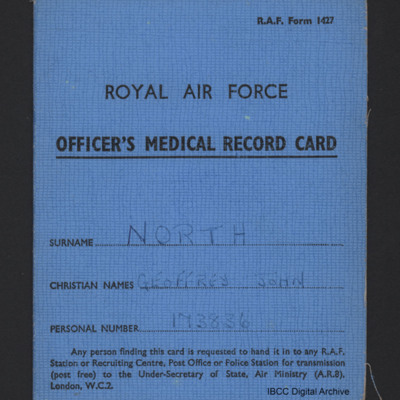 Medical record booklet for Geoffrey North with medical classification A3B on 21 July 1945 and 10 October 1946, Also contains a summary of medical board held on 30 September 1946.
View all 31 items