Seven items. The collection consists of documents and photographs related to Sergeant George Reid Williamson being shot down over occupied France on 3/4 May 1944, during an operation to Mailly-le-Camp. Items include a memoir of his escape as well as photographs and names of helpers in the French resistance. The collection has been loaned to the IBCC Digital Archive for digitisation by Don Hillier and catalogued by Trevor Hardcastle.

The day I reviewed the German army 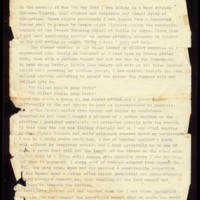 The memoir details the events after Sergeant George Reid Williamson baled out of his Lancaster over Chateau-Thierry. After hiding in a wood for a few days, he met a local farmer who took him back to the farmhouse for food and a large overcoat. While… 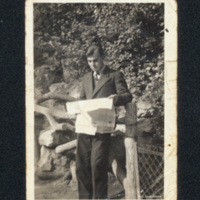 George Reid Williamson dressed in a pinstriped jacket and dark trousers, leaning against a wood and wire fence, whilst reading a newspaper and smoking a cigarette. A wooded area is in the background. On the reverse ‘In the Bois de Boulogne during…

Members of the French resistance 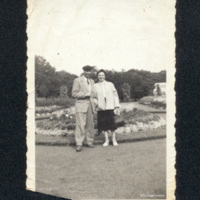 A man and a woman, dressed in smart summer wear, pose in a park. He holds a pipe and she carries a dark coloured bag and a pair of white gloves. On the reverse 'Helpers. Don’t remember name. Might be Daniel' and 'Tollcross Août 1952'.

George Reid Williamson on a rooftop

George Reid Williamson, smartly dressed in civilian clothes with a tartan tie, stands on a rooftop looking at the camera. Trees and buildings are seen in the background. 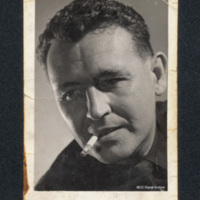 Head and shoulder portrait of a man dressed in a dark shirt and tie, smoking a cigarette. He has short dark hair. On the reverse ‘Another helper Jack Bergie’.

George Reid Williamson in front of a Wellington 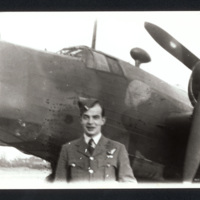 George Reid Williamson standing in front of a Wellington. Trees are in the background. On the reverse 'George with his good friend the Lancaster' [sic]. 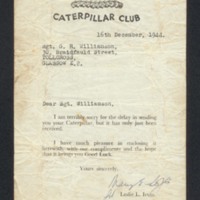 The letter apologises for the delay in sending out the caterpillar club badge to Sergeant George Reid Williamson. The sender encloses the badge with good wishes. Signed on behalf of Leslie Irvin.
View all 7 items