61 items. The collection concerns Sergeant George Toombs (1590211 Royal Air Force) and contains his log book, decorations, memorabilia and 56 photographs. George Toombs completed 30 operations as a flight engineer with 460 Squadron from RAF Binbrook and served in Germany after the war.

The collection has been loaned to the IBCC Digital Archive for digitisation by Stephen E Toombs and catalogued by Barry Hunter.

Flying log book for navigators, air bombers, air gunners and flight engineers for George Toombs, flight engineer, covering the period from 1 May 1944 to 7 October1944. Detailing his flying training and operations flown. He was stationed at RAF…

Two men drinking in a garden 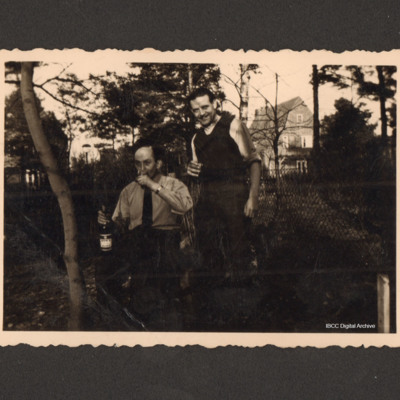 Two men in shirt-sleeves are drinking in a garden. One is seated, holding a bottle, the other is standing. 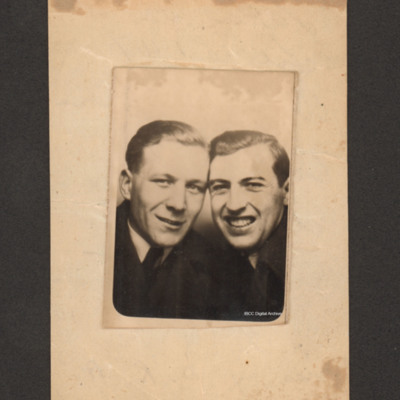 Head and shoulders portrait of two men wearing collar and ties. On the reverse 'Taken on the 18.1.47 Winter Gardens. Our last stag party. Yrs. Kiss my b.R.A. Gut Oot!'.

View across trees to large building 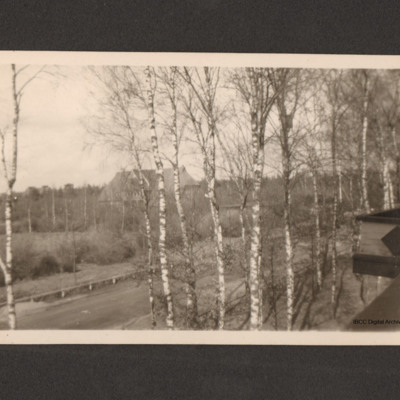 Taken from the upstairs of a building looking past silver birch trees and a road to a large building surrounded by trees.

Two men and a woman 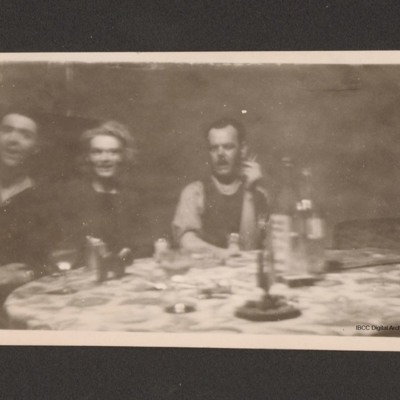 The three are sitting at a table with drinks and bottles. One man is smoking. On the reverse '1947 Taken in Germany [undecipherable]' Demob Party. 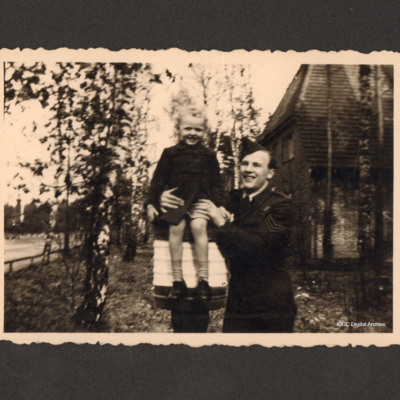 A sergeant airman is holding a child who is sitting on a large light. Behind is a garden and a large brick house. 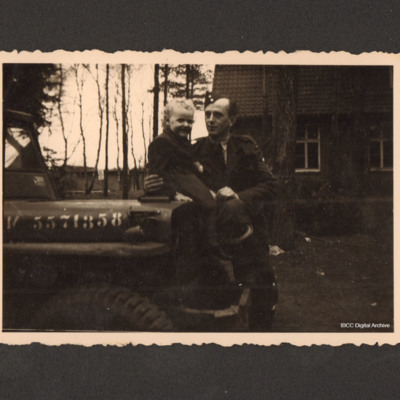 An airman is holding a child sitting on the bonnet of a jeep numbered 5571358. Behind are trees and a brick house. 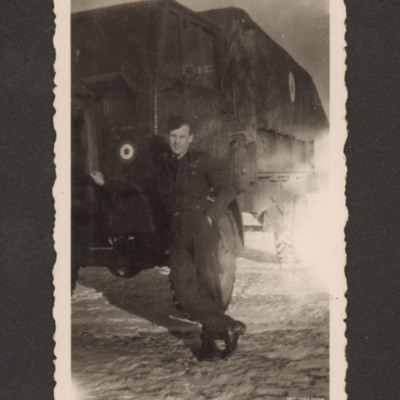 An airman is leaning on a lorry with Royal Air Force roundels. The ground is covered by snow. 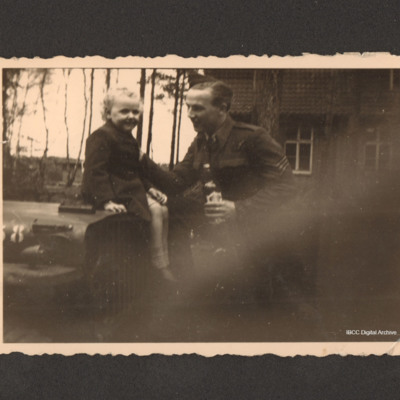 An airman holding a bottle is also supporting a child sitting on the bonnet of a jeep. Behind is a brick house.

Airman beside Soviet prisoners of war memorial at Bergen-Belsen 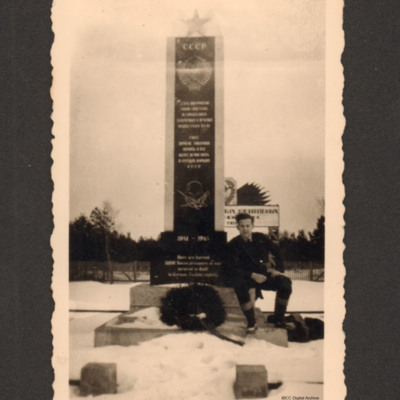 An airman is sitting beside the Soviet prisoners of war memorial at Bergen-Belsen. At the top is 'CCCP' and a star. The ground is covered in snow.

Two men drinking in a garden 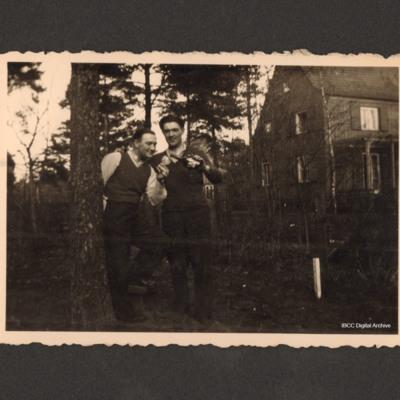 Two men are standing beside a tree in a wooded garden. One man is pouring from a bottle into a glass. Behind is a large brick house. 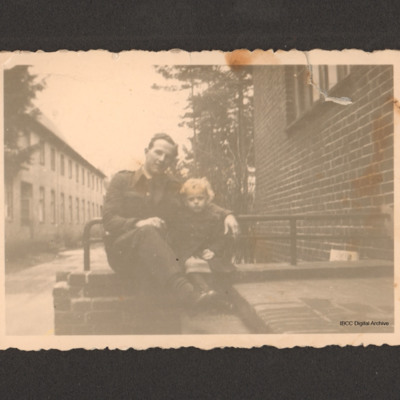 An airman is seated on the side of some steps with his arm round a child. On his left is a brick building and further behind a second building. 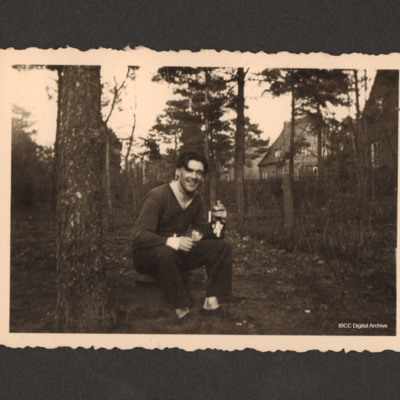 A man is sitting in a wooded garden. He has a glass on one hand and a bottle in the other. Behind are two large houses. 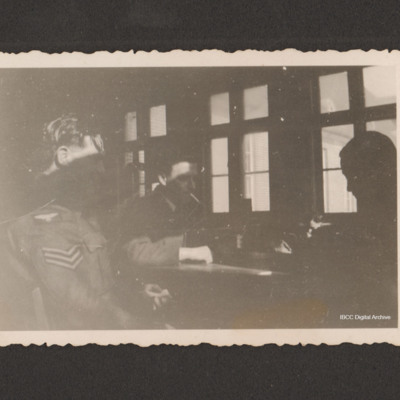 Three airmen seated at a table. Closest is a sergeant and on his left is an airman smoking. Behind are three windows.

Two men, a woman and a child 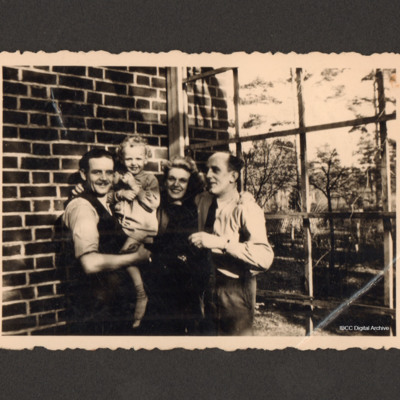 Three quarters image of a man holding a girl and a woman has her arms round both men. Behind is a brick building and a trellis.

Girl and man in a garden 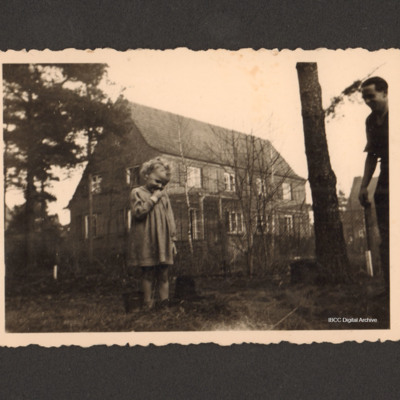 A girl is looking at something in a garden, watched by a man. Behind is a two storey brick building. 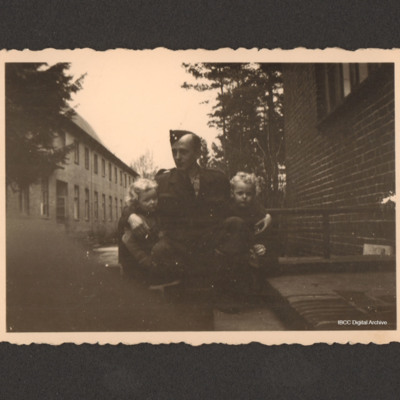 Half length portrait of an airman holding a boy and a girl. On his left is a brick building and on his right a second building. 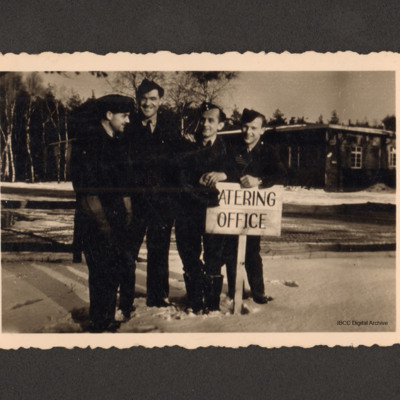 Four airmen standing in the snow beside a catering office sign. Behind is a single storey building.

Three men and a girl 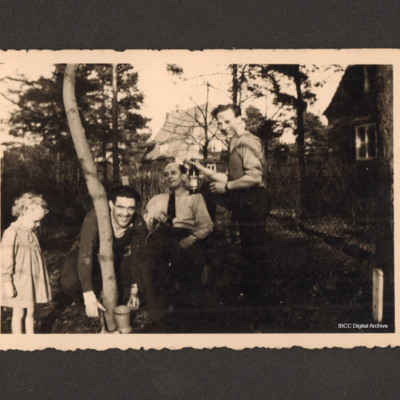 The three men are drinking beer watched by a girl. They are in a garden beside a small tree.

Three men, a woman and a girl 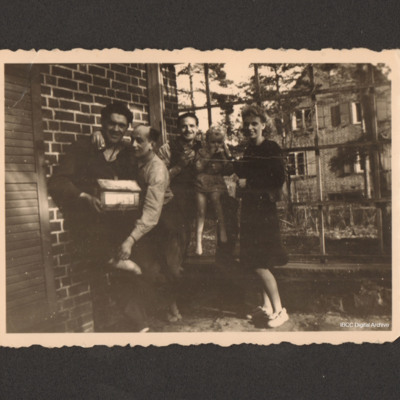 A man and woman are holding a girl. One man is standing holding a box and a second man has his arm round his neck. They are at the side of a brick building. 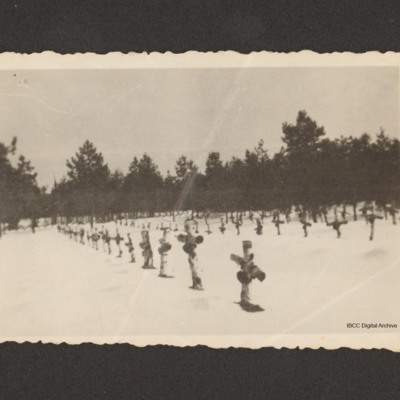 Rows of graves on a snowy landscape at the edge of a wood. The crosses are wooden and lashed together.

Two airmen in the snow 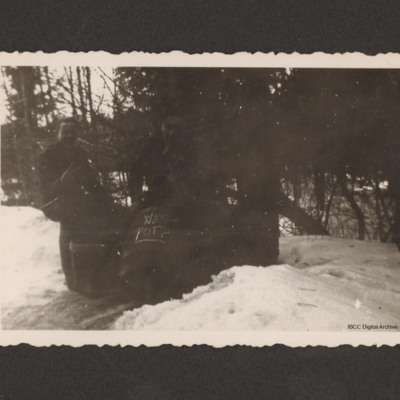 Two airmen sitting on barrels in the snow. On one is written 'Wot no Pot?'.

Seven airmen and a lorry 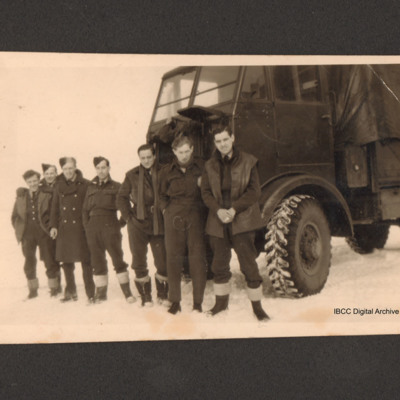 Seven airmen are standing in a line in front of a lorry. The ground is snow covered. On the reverse 'Taken in Germany at Fassberg 26/2/47'.

Two airmen in the snow 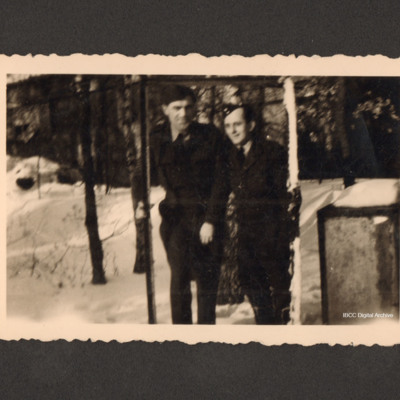 Near full length image of two airmen standing in the snow. Behind are silver birch trees and the base of a mast. 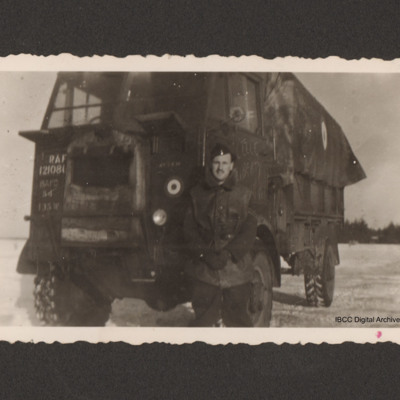 An airman is standing in front of a Bedford QL lorry, scribbled "Celle Liberty". The ground is snow covered.
View all 61 items