The collection has been loaned to the IBCC Digital Archive for digitisation by Roy White and catalogued by Barry Hunter.

Large group of airmen in Aden

Four rows of airmen arranged in front of a twin-engined Wellington aircraft. On the reverse 'Aden 1947' and printed 'A.M. Crown copyright Reserved'. Ten airmen arranged in two rows. The front row is seated, the back row standing. Many have signallers' half brevets. It is captioned -
'No 13 Air Gunners School
Emergency Course No. 31
Evans, Kite, McFadzean, Needham, O'Bee, Warner, White,… 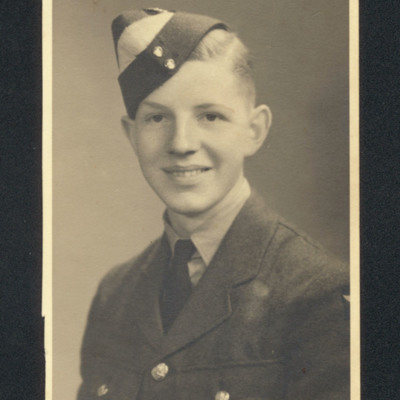 Roy White in uniform with a side cap and training flash. 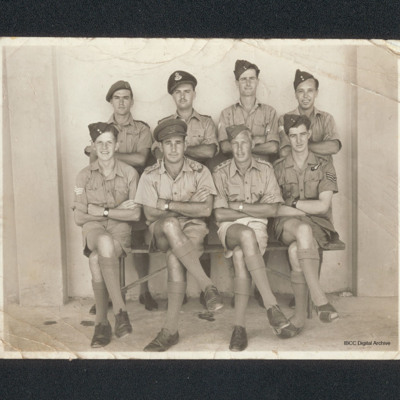 Eight RAF and Army servicemen in tropical dress, four sitting on a bench and four standing behind. All have their arms crossed. On the reverse (first row standing, second row seated) -
'The Crew
Left to Right
Johnny - George - Jimmy -…

Seven airmen sitting on the grass 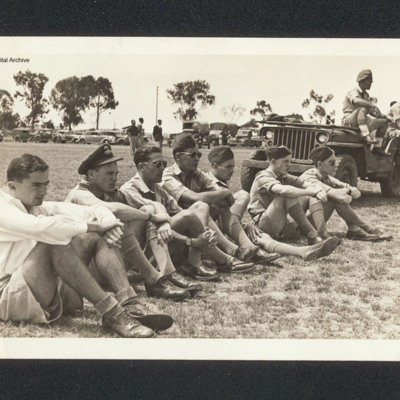 A group of seven airmen (six in tropical uniform) sitting on the grass, behind is a jeep with two more airmen sitting on it and dog. Further behind are saloon cars and spectators in civilian clothes. The airmen are wearing shorts . On the reverse is… 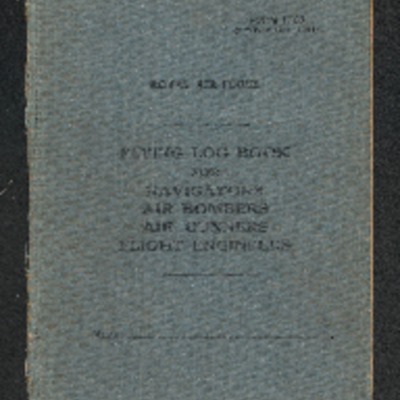 RAF log book issued to Roy White. It records his duties as a wireless operator.

Service and Release Book, issued to Roy White. It includes his first medical and a short physical description of him. He served from 30 August 1943 to 16 June 1947.

Roy White was born in Perth, Scotland but grew up in London. He joined the Air Training Corps, went on as a volunteer reserve and then served as an air gunner in the RAF. Tells of his brother serving in Coastal Command and surviving an aircraft…
View all 8 items