23 items. An oral history interview with Flying Officer Keith Ganney (b. 1922, 1324929 Royal Air Force), his log books, documents and photographs. He flew operations as a bomb aimer with 57 Squadron.

The collection has been donated to the IBCC Digital Archive by Keith Ganney and catalogued by Barry Hunter.

Flying log book for aircrew other than pilot for K Ganney, Air Bomber, covering the period from 29 May 1943 to 24 August 1945. Detailing his flying training, operations flown and instructor duties. He was stationed at RAF Brough, RCAF Paulson, RCAF… 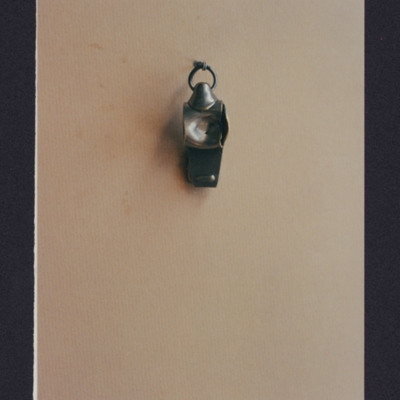 A photograph of a whistle damaged during an operation. Attached on a separate image is a story about the whistle.

Three Cheers for the Man on the Ground 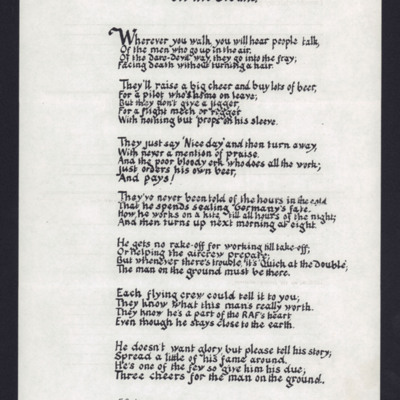 A poem about ground crew. 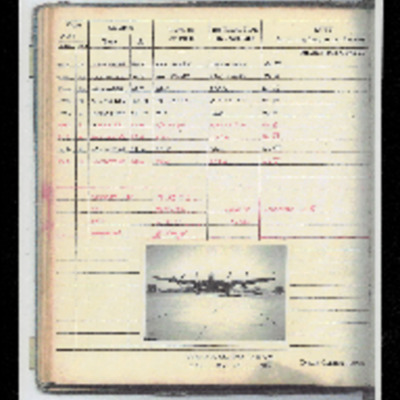 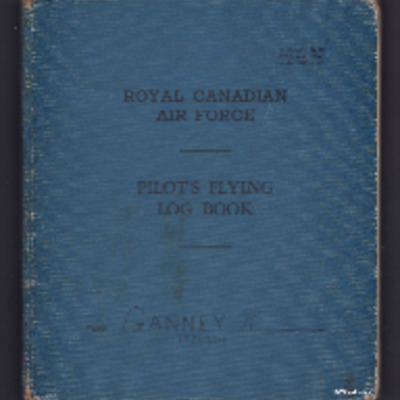 Pilots flying log book for K Ganney, covering the period from 7 December 1942 to 16 April 1943. Detailing his flying training. It also lists his flying prior to log book. He was stationed at RAF Brough, RCAF Davidson and RCAF Dauphin. Aircraft flown… 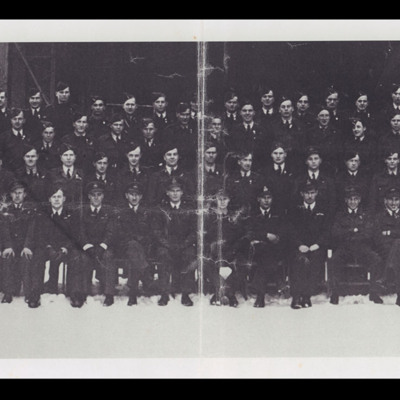 A large group of airmen and ground crew arranged in four rows in front of a hangar. On the ground is a covering of snow. 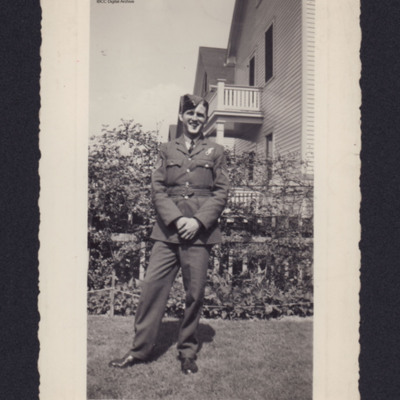 Unidentified airman standing on a lawn in front of wooden buildings. On the reverse 'All my love, Bruce xx' and stamped 'Carharts "High Hat"' 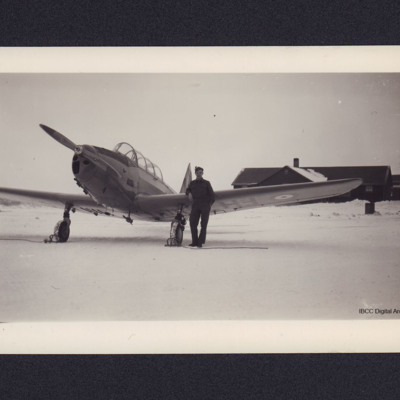 Keith standing beside a Cornell trainer. The ground is snow covered. On the reverse 'Cornell Trainer'. 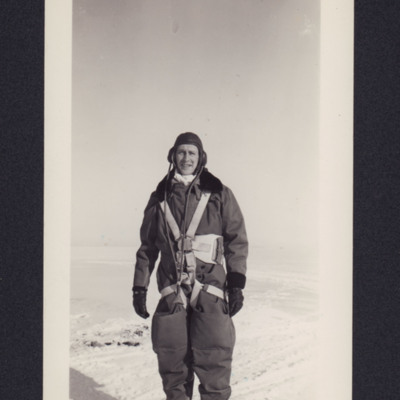 Keith in flying suit, helmet and parachute, standing in the snow. 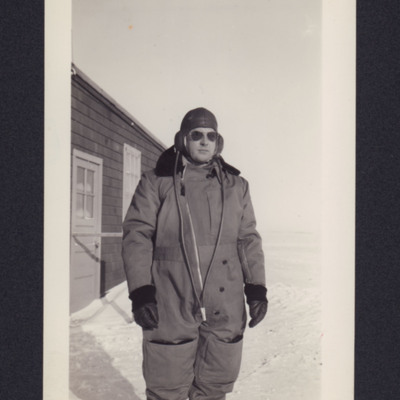 One unidentified airman dressed in Sidcot suit, helmet and sunglasses, standing in a snowy landscape. Behind is a wooden hut. 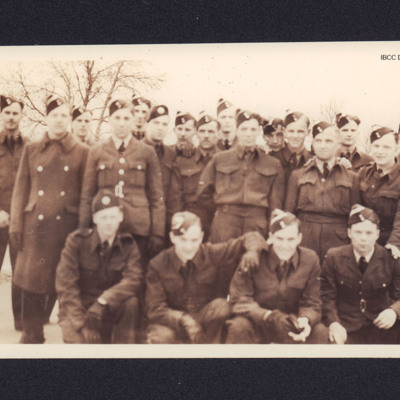 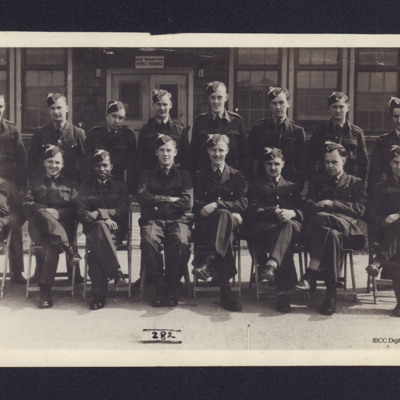 16 airmen arranged in two groups. The image is annotated '282'. Keith is back row, 2nd from right. On the reverse are 16 signatures. 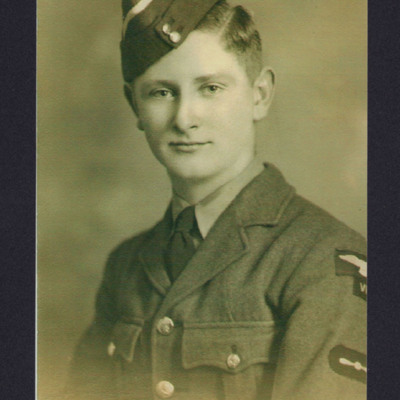 A half-length portrait of Keith as a trainee. 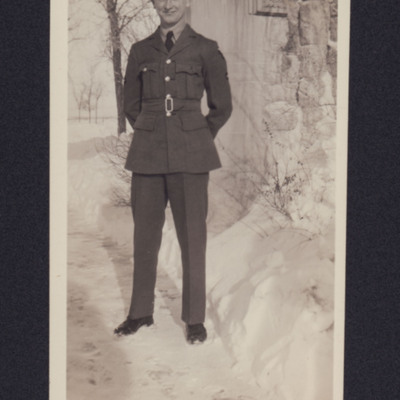 Full length portrait of Keith as a trainee standing on a snowy path. On the reverse 'Don't I look dim!' 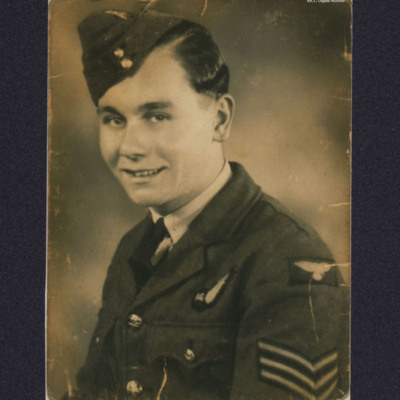 A half length portrait of George in uniform. 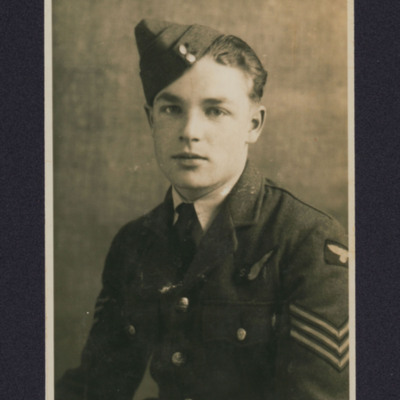 Half length portrait of George in uniform. On the reverse 'George Hardy'. 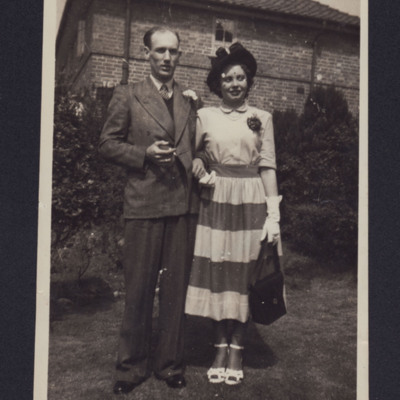 The couple are dressed for a wedding, with floral buttonholes. On the reverse 'Jack Vasey (skipper) & Wife 57 Sqdn'. 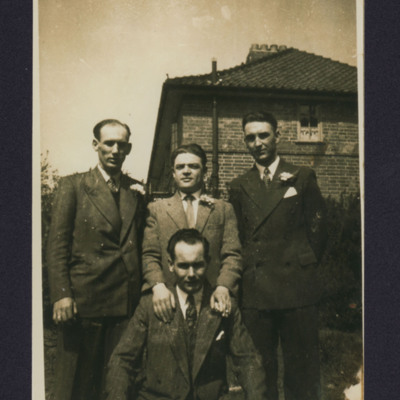 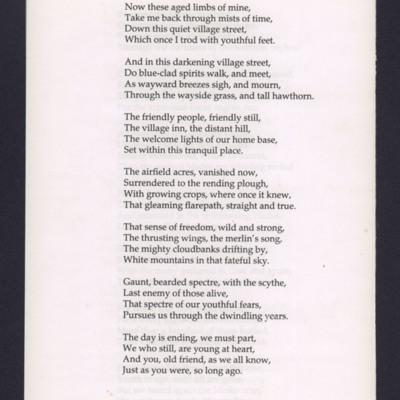 Memories of a Lancaster Bomber Raid 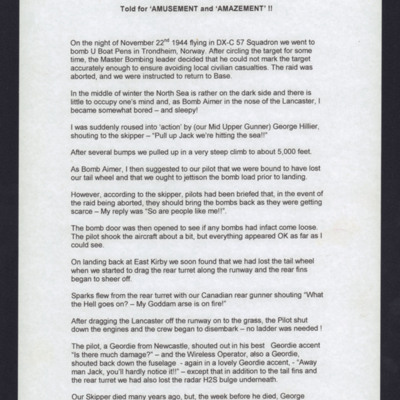 An account of an operation to Trondheim, Norway. The attack was aborted because of the danger of hitting Norwegian civilians. On the return they hit the sea and lost the tailwheel and H2S radar dome. 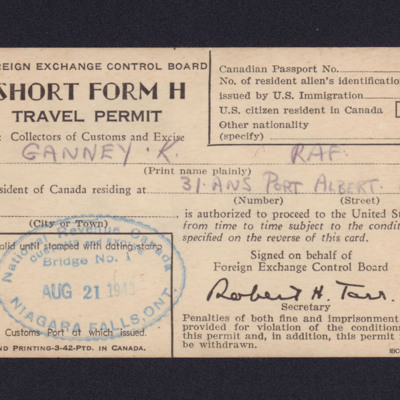 A permit allowing Keith to travel to the United States. 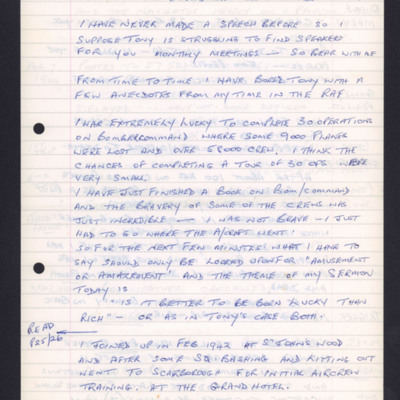 A speech given by Keith. He recalls his 30 operations and his time training at Scarborough, Brough and Canada. Initially a pilot he was reassigned as a bomb aimer. He was posted to East Kirkby. He details some of his operations. Flying Officer Keith Ganney joined the Air Force in 1942 and trained in Canada. He flew operations as a bomb aimer with 57 Squadron from RAF East Kirkby.
View all 23 items