Ten items. The collection concerns Leading Aircraftswoman Marion Clark (Royal Air Force) and contains an audio recording and photographs. She served as a driver in the Women's Auxiliary Air Force at RAF Hemswell and RAF Ingham.

The collection has been donated to the IBCC Digital Archive by Dorothy Cole and catalogued by Barry Hunter.

Marion Clark grew up in Lincolnshire and served as driver at RAF Hemswell and RAF Ingham. She discusses her role as a driver and life on a bomber station.

Marion's life detailed, from birth, including her days with the RAF. Five photographs from an album.
#1 is a WAAF holding a dog. Behind is an ambulance. It is captioned 'Pat at Bentley Priory'.
#2 is three WAAFs and two airmen in the sun, captioned 'Joan, Bill, Peg, Maggie & Freddie, sunning themselves outside…

Marion Clark and a Lancaster Crew Marion and seven crew in flying gear, standing by the tail of a Lancaster with Rose-Rice rear turret, with twin 0.50 calibre Browning machine guns. Three photographs.
#1 is Marion standing in the snow at the tail of a Wellington, code 'GR', 301 Squadron.
#2 is Marion and a colleague standing at the tail of the same aircraft, code 'GR-H'. The ground is snow covered.
#3 is an airman in flying… Four photographs from an album.
#1 is an airman in flying gear standing at the entrance of an aircraft.
#2 is Lord's cricket ground.
#3 is Marion and a Commer Q2 15 cwt van RAF 92275.
#4 is Marion at the wheel of a Austin K6 Crew coach. Four photographs from an album.
#1 is nine ground crew and Marion, captioned 'Flight Boys of 170 Squadron December 1944.'
#2 is a sergeant leaning on a tree with a Nissen hut behind. It is captioned 'Here's to the Blood Wagon Chris wrote on the… Three photographs from an album.
#1 is ten airmen and Marion, captioned 'My favourite crew R Roger also groundcrew'.
#2 is seven aircrew and Marion. It is captioned 'Randy & crew just returned from the last opp which was Bremen, 22nd April… 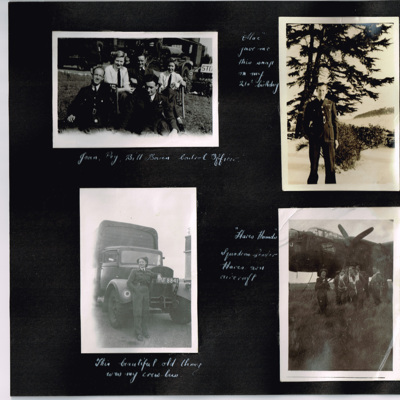 Four photographs from an album.
#1 is two WAAFs and three men sitting in the sun. It is captioned 'Joan, Roy, Bill [indecipherable] Control Officer. Behind is a Crossley 4 x 4 Fire Tender.
#2 is a pilot standing in a snowy landscape. It is… Four photographs from an album.
#1 is five airman and four WAAFs with a Union Flag. It is annotated 'Pat's 21st birthday party taken on Bishop's Bridge just outside 'The Bell' on the Market Raven [sic] Road'.
#2 is two airmen and nine WAAFs…
View all 10 items