Eighty-seven items and a sub-collection of seventy-three items.

The collection concerns 78 Squadron and contains documents and photographs.

The collection has been donated to the IBCC Digital Archive by Tony Hibberd and catalogued by Nigel Huckins. 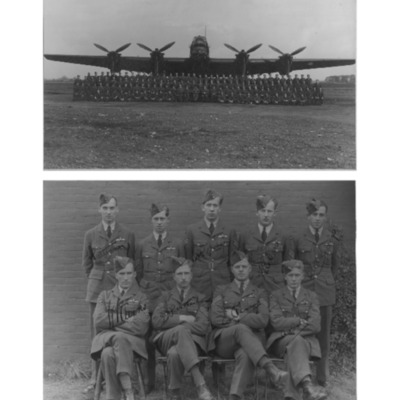 Transcription of day by day account of activities from 19 April 1942 to 3 October 1942. Commences with photograph of Squadron in front of Halifax and of pilots on training course (Pattisson top left), Records daily activities, casualties, losses of… 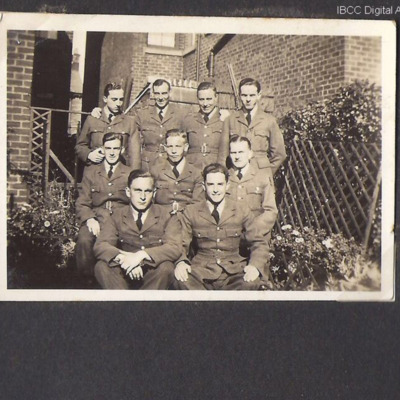 Nine airmen wearing tunics sitting and standing in three rows. In the background brick built houses and a fence. On the reverse, signatures and note '13 Oct 1940, Blackpool'. 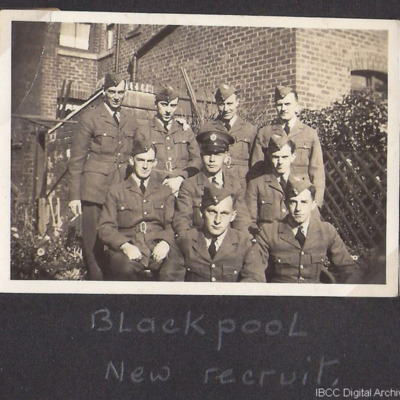 Nine airmen all wearing tunics, eight with side caps and one with peaked cap, sitting and standing in three rows. In the background a brick house. Captioned 'Blackpool, new recruit'.

A large group of airmen in front of a building 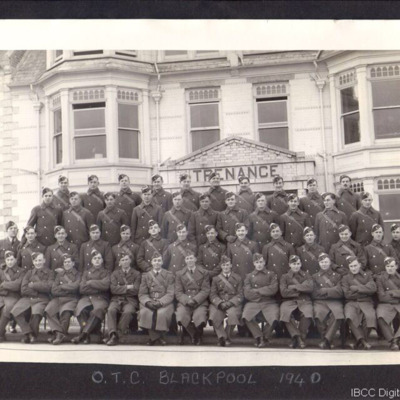 A large group of airmen wearing greatcoats and side caps sitting and standing in four rows in front of the entrance to a large building with bay widows. Captioned 'O.T.C. Blackpool 1940'. 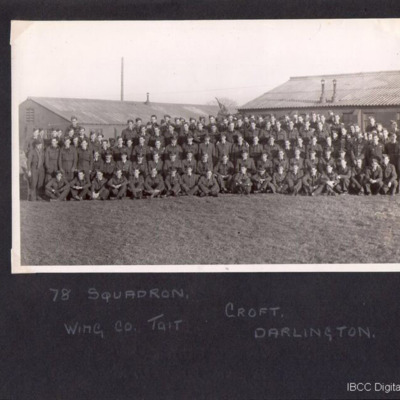 A large group of airmen sitting and standing in five rows in front of a building with arched windows. On the reverse 'No 62 Course, No 2 SFTS Brize Norton May 1941 and list of names'. 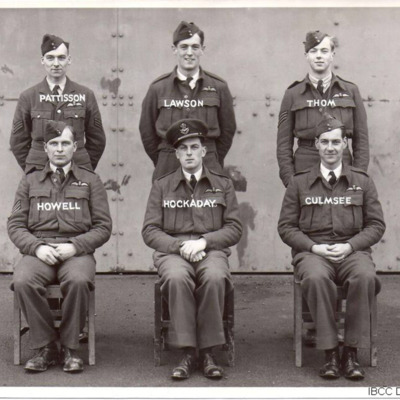 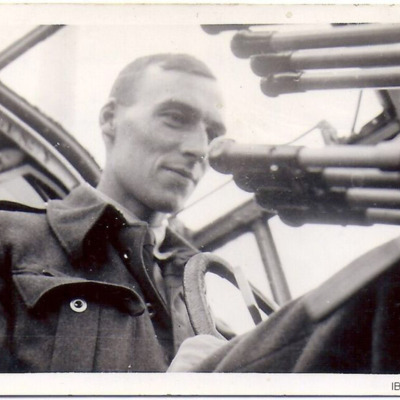 Head and shoulders image of a sergeant wearing battledress sitting in the pilot's seat in the cockpit of an aircraft. 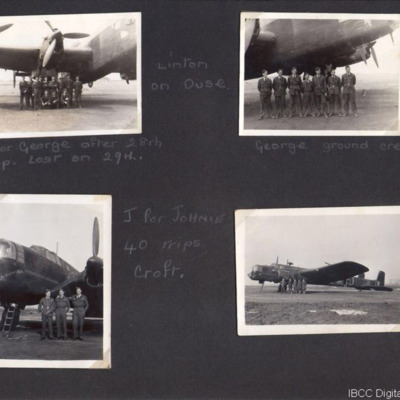 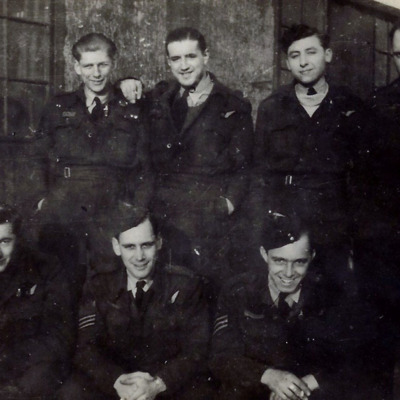 Seven airmen wearing battledress with brevet, some with side caps. Three squatting in front and four standing behind with wooden hut in the background. 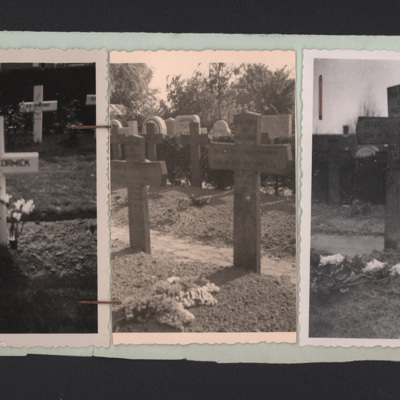 Three photographs. Left - a white cross with 'J M CORMICK RAF'. flowers to right and other crosses in the background. Middle - front row of two stone crosses with indistinct wording. Behind another row of stone crosses and behind a hedge other… 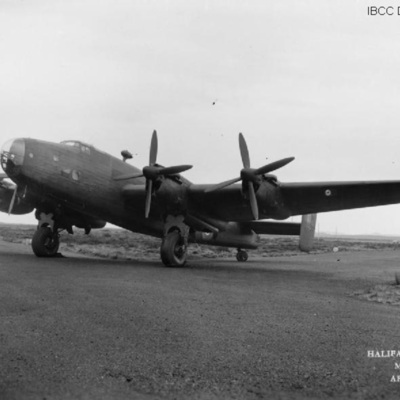 A large group of airman 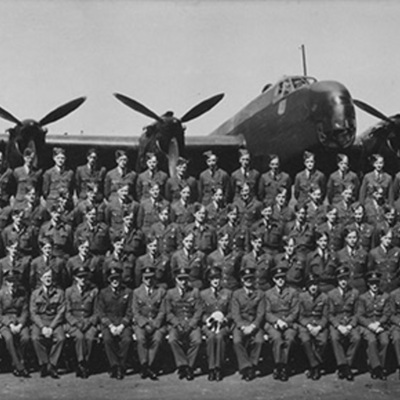 A large group of personnel sitting and standing in five rows in front of a Halifax. 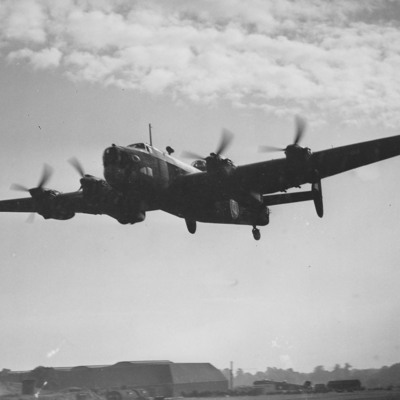 Front quarter view of a Halifax flying just above ground with hangars and another Halifax in the background. Submitted with caption 'Halifax 1'. 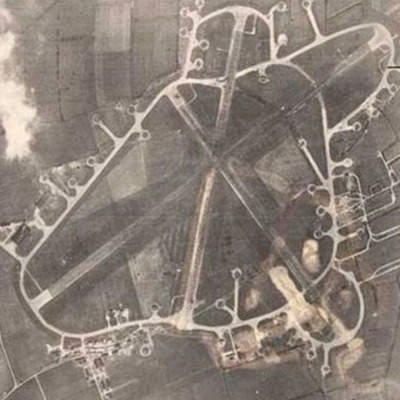 This item was sent to the IBCC Digital Archive already in digital form. No… 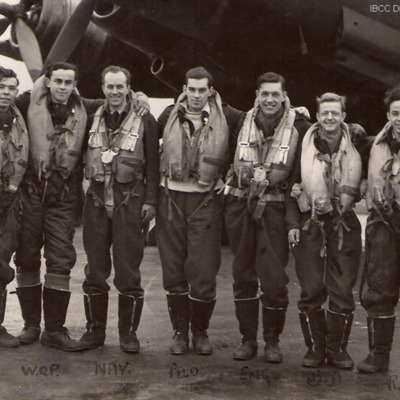 Seven airmen wearing flying suits and boots as well as Mae West and parachute harnesses standing arms round shoulders of each other in line in front of a Halifax. Captioned from left to right 'MU, WOP, NAV, PILOT, ENG, B.A., R.G.'. 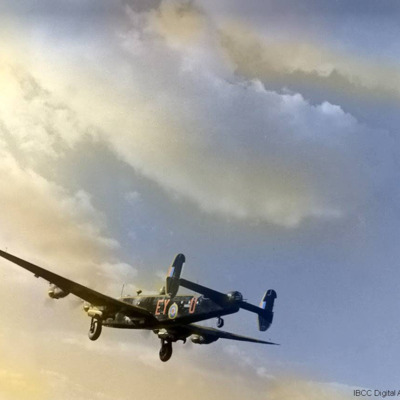 Rear quarter view of a Halifax letters 'EY-O' with undercarriage down. Clouds in the background. 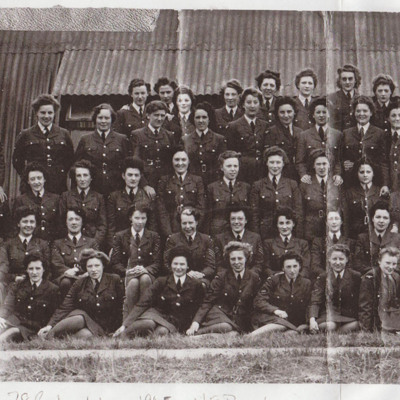 Left and right images of a large group of Members of the Women's Auxiliary Air Force wearing tunics and skirts, sitting and standing in five rows with corrugated iron huts in the background. Submitted with captions '78 Sqn WAAFs LHS' and '78 Sqn…

Two airmen working on aircraft engine watched by an officer 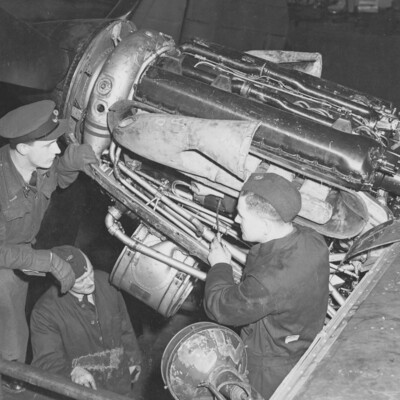 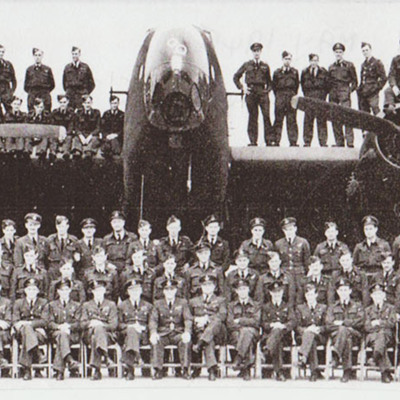 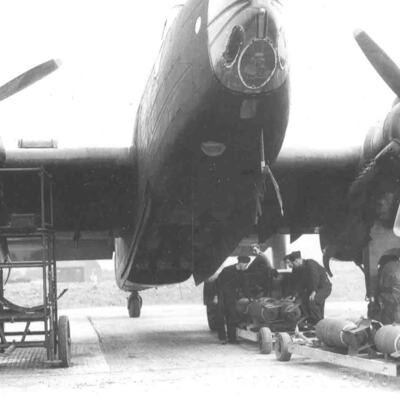 View of the front of a Halifax with two bomb trolleys with general purpose bombs underneath. Four airmen are clustered round the rearmost bomb trolley. There is a gantry by the starboard inner engine. Submitted with caption '78 Sqn bombing up'. 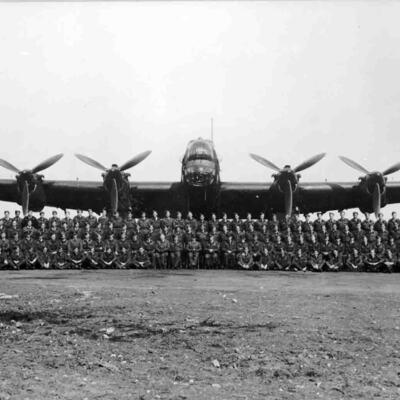 A large group of airmen sitting and standing in four rows in front of a Halifax. Submitted with caption '78 Sqn at RAF Croft 1942'. 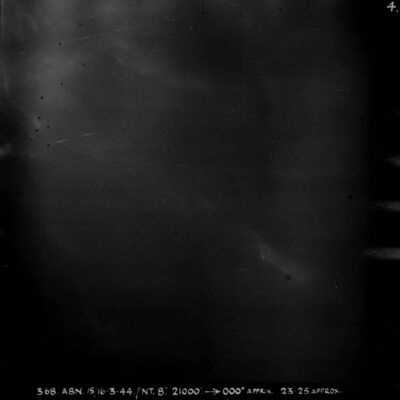 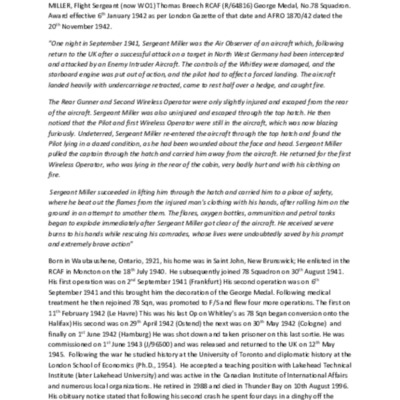 Account of his aircraft, in which he was air observer, being attacked on return from operation in Germany by intruder aircraft. The aircraft was crash landed and caught fire. Miller escaped through the top hatch but noticed that the pilot and… 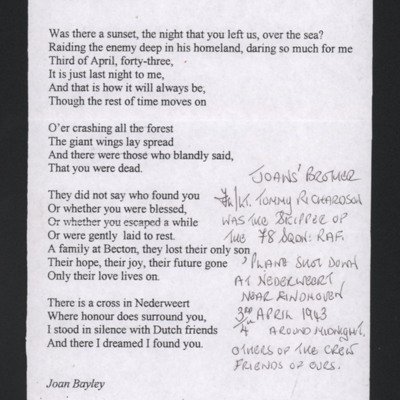 Poem about an aircraft that crashed at Nederweert in the Netherlands. Handwritten note 'Joan's brother F/Lt Tommy Richardson was the skipper of the 78 Squadron RAF plane shot down at Nederweert near Eindhoven 3/4 April 1943 around midnight. Others of…
View all 160 items