37 items. The collection concerns Jack Hagger (b. 1931, 1920358, Royal Air Force) and contains technical diagrams and photographs of aircraft and places including some from the filming of 'The Dam Busters'.

The collection has been donated to the IBCC Digital Archive by P Thompson catalogued by Nigel Huckins. 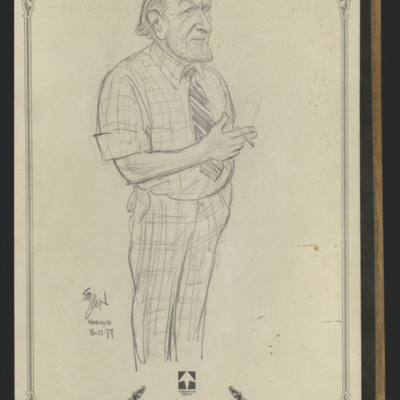 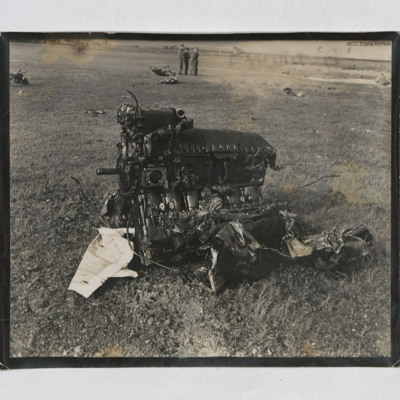 Aircraft engine with other pieces of mangled metal lying on grass in foreground. Other pieces of wreckage scattered about. Three men standing in distance. On the reverse 'Spitfire L.P. 85, RAF Leuchars/48'. 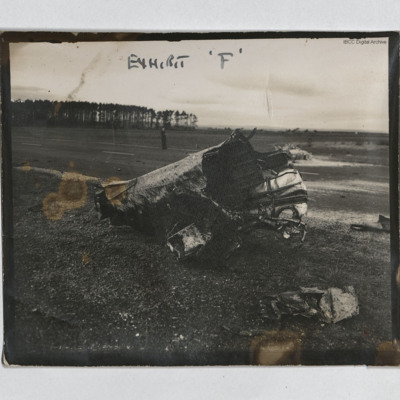 Mangled piece of aircraft wreckage (part of fuselage) in foreground with man standing in middle distance and trees behind on left. Captioned 'Exhibit F'. 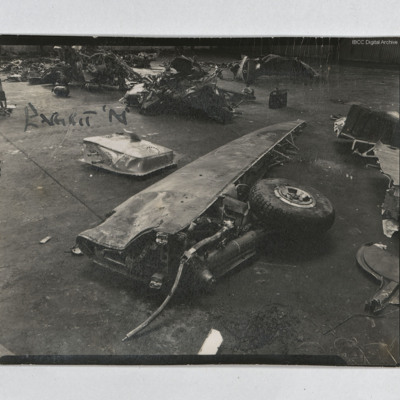 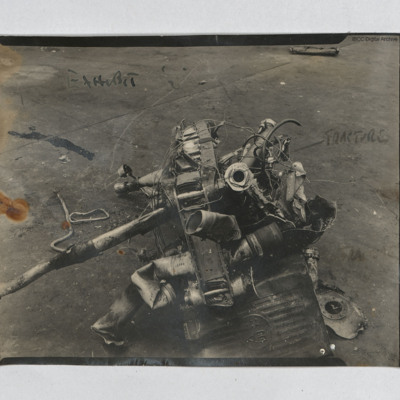 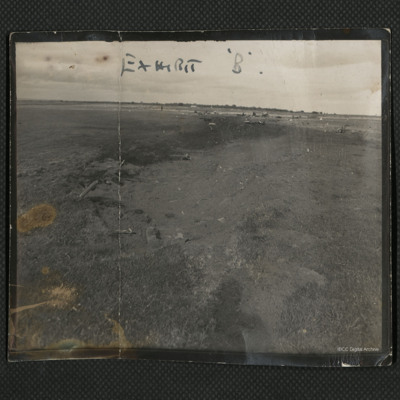 Open ground with pieces of aircraft wreckage scattered about over a wide area. Captioned 'Exhibit B'.

Dam wall with sluices open and water flowing out. 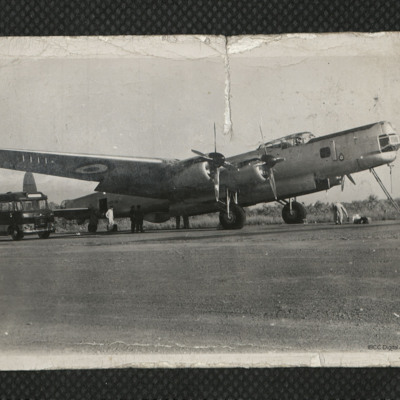 Front quarter view of an Avro Lincoln parked. There are several people near rear door and two others under the nose. There is a coach on the left side. On the reverse 'Lincoln Aussie [............], RKT, RKS our [...] NP Gen ASR Duties Merlin 68A. CR… 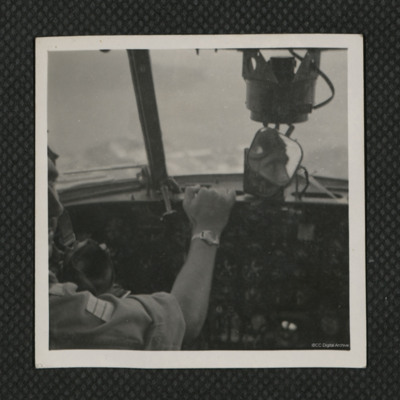 View of a from the cockpit of an aircraft. On the left part of a man wearing shirt with sergeants rank and with his hand on coaming. 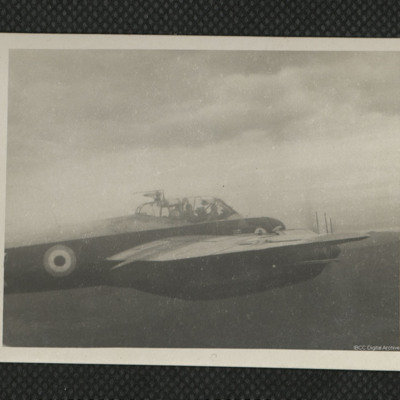 Air-to-air close view of the starboard side of the front of a Bristol Brigand. 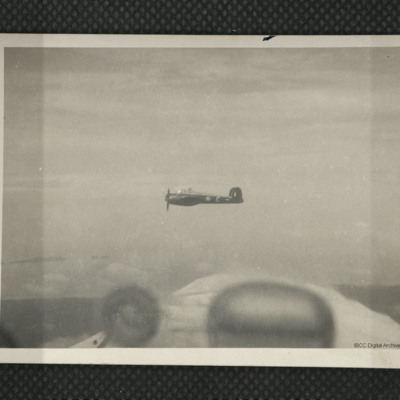 Air-to-air view of the port side of a twin engine, twin tail aircraft flying to the left in the distance.

A long two story building with arched windows and doorways on the far side of an open space with a few people walking. 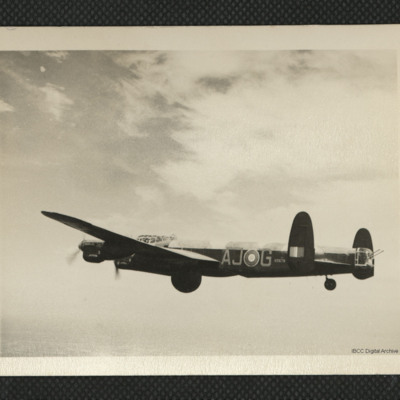 Air-to-air view of rear quarter view of a four engine bomber with squadron letters 'AJ-G' airborne with clouds above. The aircraft carries a mocked up bouncing bomb for the filming of 'The Dam Busters'.

On the reverse 'Originally a 617 aircraft… 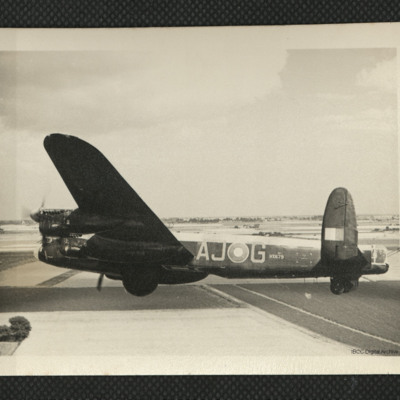 Air-to-air view of rear quarter view of a four engine bomber with squadron letters 'AJ-G' and registration 'NX679' airborne at low level in a bank to the right with fields below. The aircraft carries a mocked up bouncing bomb for the filming of 'The… 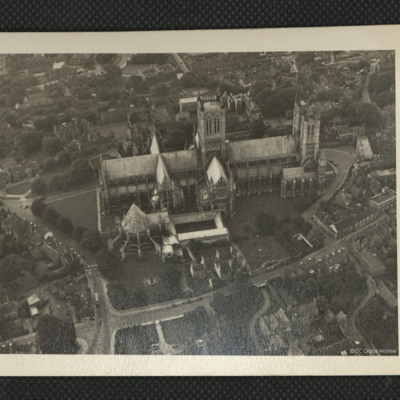 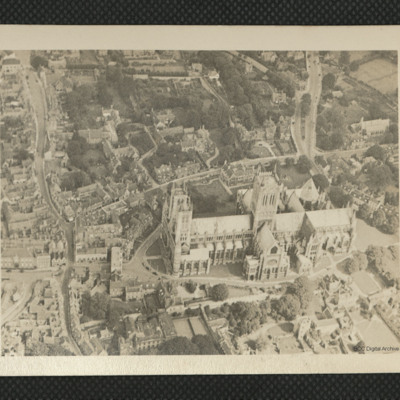 View from aircraft of tower and dam wall with tree covered hill in background. On the right part of a wing. On the reverse 'My side - tight turns at Ladybower'.

Tail turret of a wellington 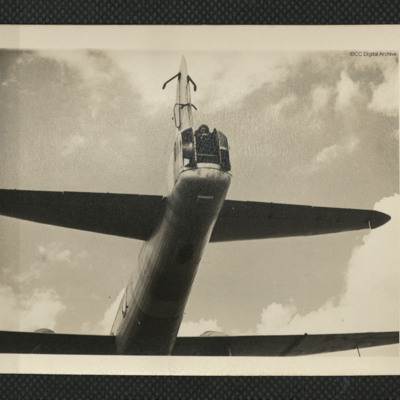 Air-to-air closeup view of a man in the rear turret of a Wellington. On the reveres 'Harry Bignall, 83 Squadron, Too Close?!'. 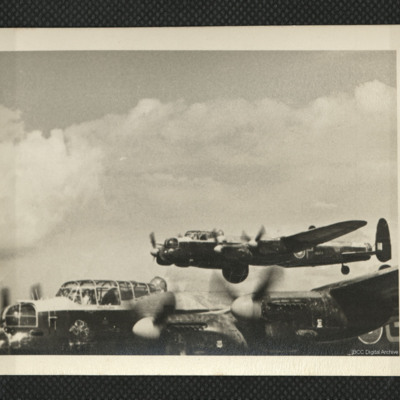 Air-to-air view of two Lancaster aircraft airborne in echelon formation. Taken from the port side of the two aircraft. The aircraft carries a mocked up bouncing bomb for the filming of 'The Dam Busters'. On the reverse 'Shuter, Dick Lambert, Mike…

Oblique aerial photograph of a dam wall with lake behind surrounded by hills. 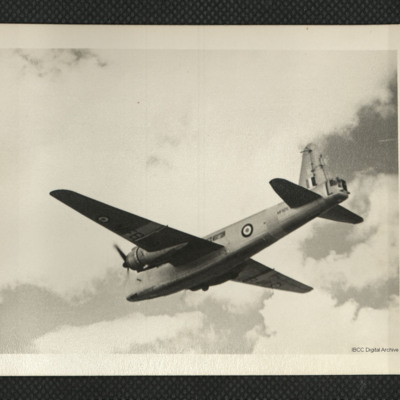 View from below rear of an airborne Wellington. On the reverse 'Swinderby Wimpy'.

Oblique aerial photograph of a dam in distance with water flowing over. Surrounded by hills. 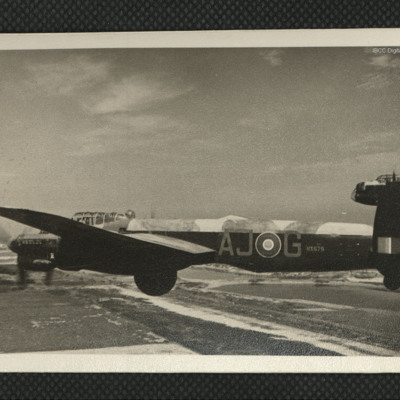 Air-to-air view of rear quarter view of a four engine bomber with squadron letters 'AJ-G' and registration 'NX679' airborne at low level with fields below. The aircraft carries a mocked up bouncing bomb for the filming of 'The Dam Busters'. The nose…

At the bottom a dam wall with lake above. On far side steep tree covered hills. Top left part of a wing.
View all 37 items