93 items. The collection contains two oral history interviews with Jim Wright, letters, cuttings and photographs. It concerns James Roy Wright’s research into his father, Sergeant Arthur Charles Wright (1911 - 1943, 1149750 Royal Air Force) and an operation to Turin 12/13 July 1943 which caused 100 aircraft to violate Swiss airspace. Two aircraft were shot down or crashed in Switzerland. There are many photographs and details of the activities that night including reports by the Swiss authorities. The crews are identified with photographs and there are several photographs of the funerals at Vevey. Additional material includes aerial photograph of bomb damage in Germany and the logbook and airman's pay book of W G Anderson.

The collection has been donated to the IBCC Digital Archive by Jim Wright and catalogued by Nigel Huckins, with descriptions of official Swiss documents provided Gilvray Williams. 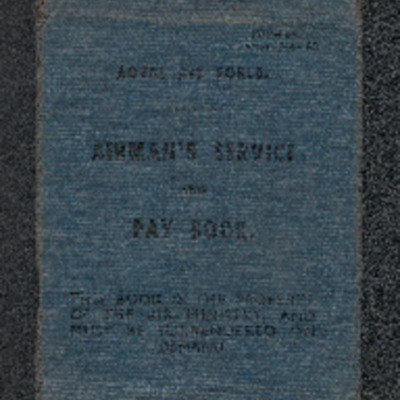 Includes some personal details, medical classification, inoculations, identity cards issued and a will. 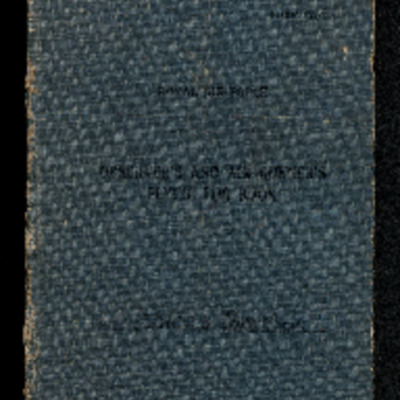 Telegram No. 809 from the Swiss Government to the Swiss Legation in London

Telegram No. 809 from the Swiss Government to the Swiss Legation in London (E. 6563), concerning the violation of Swiss airspace on 15th August 1943 (with additional references to the 12/13 July 1943 incident) when Royal Air Force bombers en route to…

Telegram No. 869 from the Swiss Government to the Swiss Legation in London 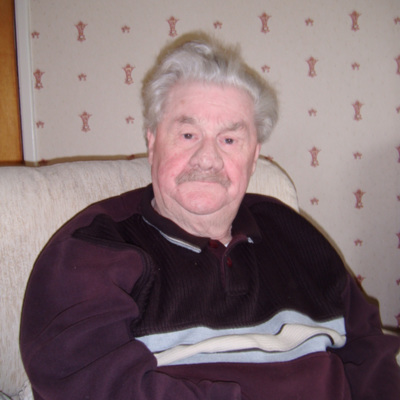 John Wright was born in 1932. He was evacuated from West Ham during the War along with his Mother and two Brothers. Johns’ Father joined the Royal Air Force as an Observer Bomb Aimer with 207 Squadron. His aircraft was shot down over Switzerland on… 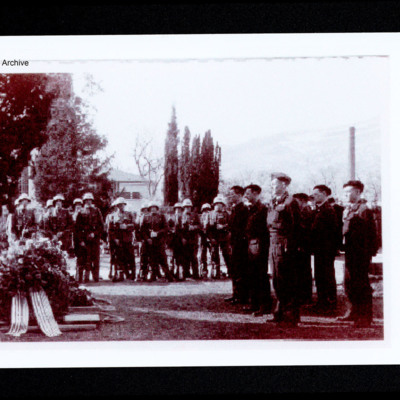 Six of Jack Benson's crew stand beside his coffin. In the background Swiss army. On the reverse 'Funeral P/O Jack Benson Vevey 1944'. 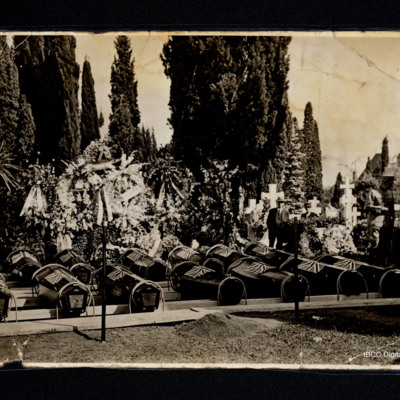 14 coffins with union flags. At the side are mourners 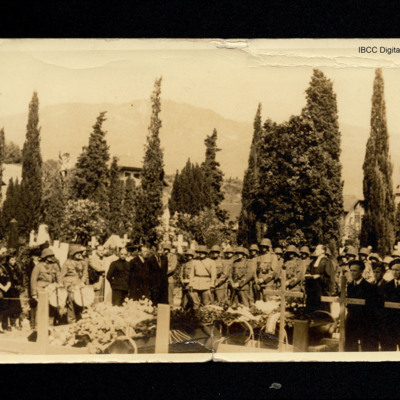 Chaplain, mourners, Swiss military and Royal Air Force officer at the graveside for the funeral of the 14 airmen.

Royal Air Force wreath at the funeral of airmen at Vevey 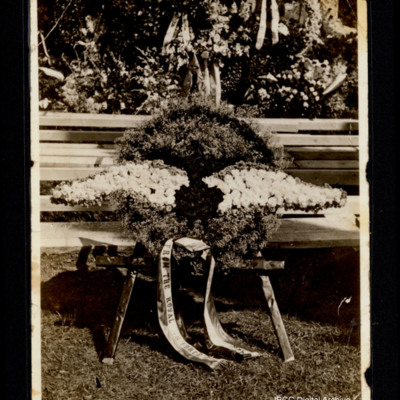 Floral wreath in the form of wings and having ribbons with Royal Air Force printed. Part of the funeral for the 14 airmen lost over Switzerland. 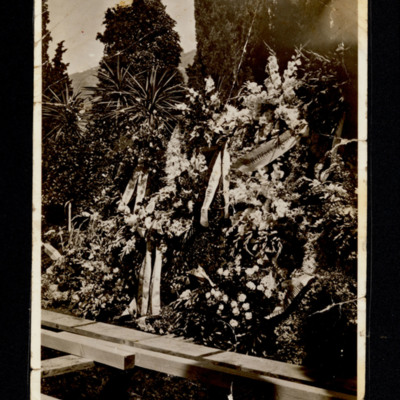 Many wreaths stacked beside open graves at the funeral of the Lancaster airmen. 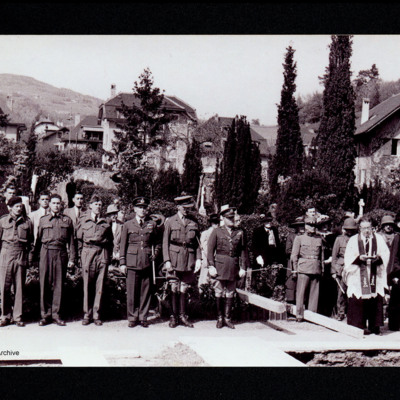 Chaplains, Royal Air Force officers and airmen, Swiss military and civilians stand by the graveside. Behind are houses and mountains. 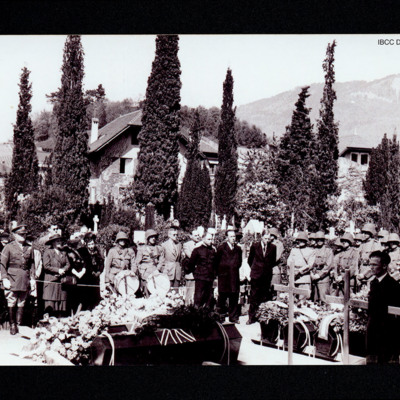 Coffins with union flags and many wreaths are surrounded by mourners, two soldiers with drums, soldiers and two Royal Air Force officers. 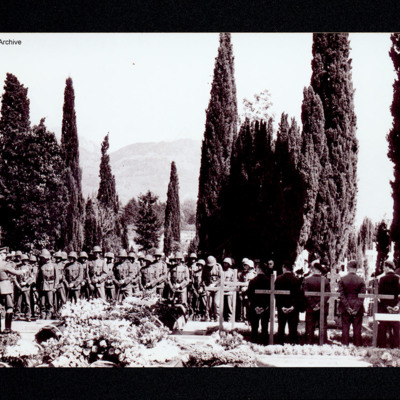 Airmen and soldiers at the funeral of the two Lancaster crews at Vevey, Switzerland. In the foreground are the wreaths on top of the coffins. In the background tall trees and mountains. On the reverse 'Vevey-St. Martins 101 & 166 sqn funerals'. 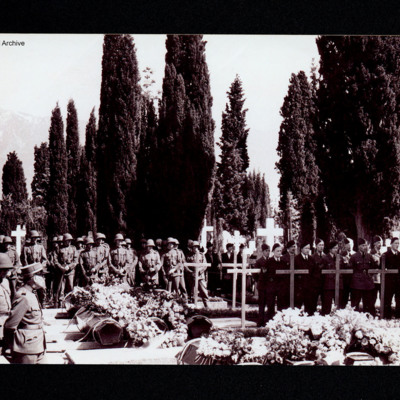 Airmen and soldiers at the funeral of 14 Royal Air Force airmen at Vevey, Switzerland. The coffins are draped with many wreaths. On the reverse 'Vevey'. 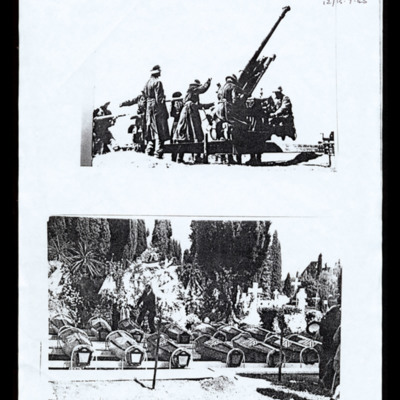 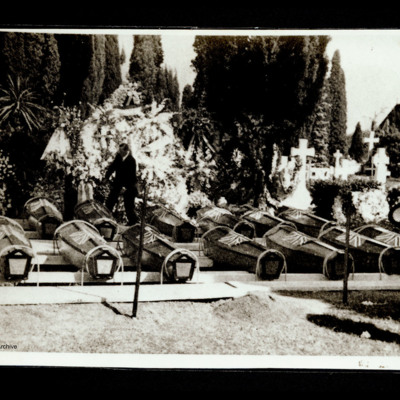 14 coffins of RAF airmen a Vevey. Union flags are draped over them at the start of the funeral service. On the reverse 'Vevey 12/13 July 1943'. 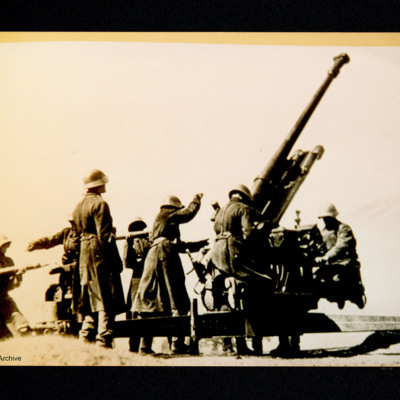 An anti-aircraft gun manned by seven men. On the reverse '75mm AA gun Schneider-Cleusot 3 batteries of this type were on the Jura mountains and shot more than 400 times in the night 12/13.7.43. The people around are Swiss soldiers and not Germans'.

Burial Service of airmen at Vevey 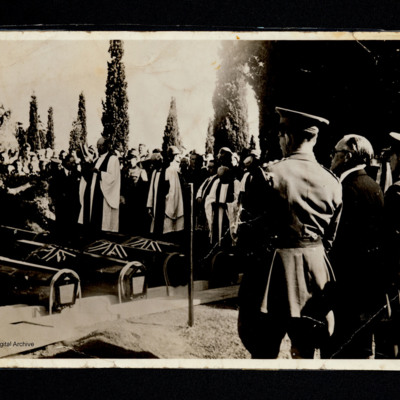 Two photographs of the burial of British airmen at Vevey. The coffins have union flags draped over. There is a large attendance in the background. One photograph is annotated 'First photo of 14 graves taken by Mrs Desborough, Vevey Burial service in…

Aircrew being laid to rest 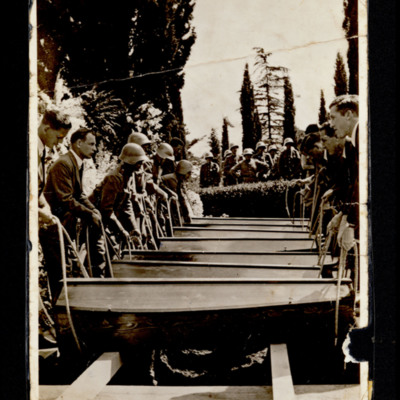 Seven coffins being lowered into graves by military and civilians at Vevey, Switzerland. The two photographs are the same but the second is captioned 'July 1943 "Our Crew" being laid to rest Semper Paratus'.

Lancaster wreckage on a Swiss hillside 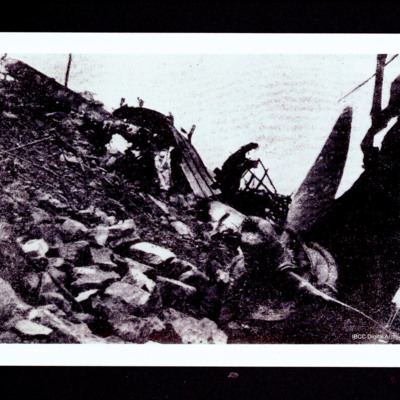 The wreckage of Lancaster ED412Q at Bouvertet Switzerland shot down by anti-aircraft fire over Switzerland 12 July 1943. The pilot was Pilot Officer Horace Badge. 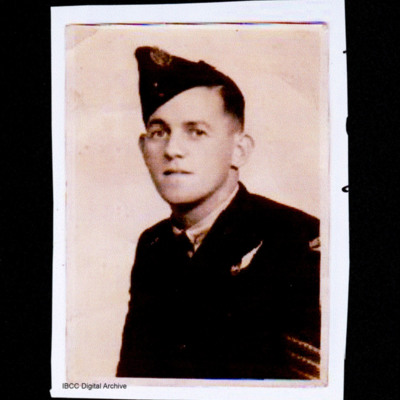 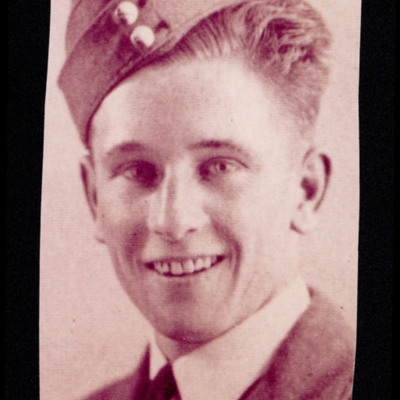 Head and shoulders portrait of Edward Higgins in uniform with side cap. 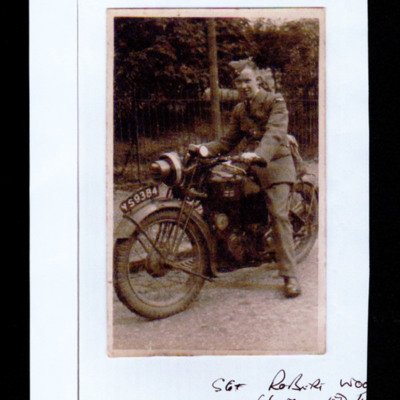 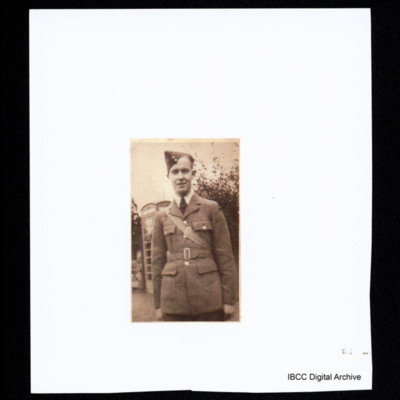 Three quarters portrait of Robert Wood in airman's uniform. Behind is a telephone box. 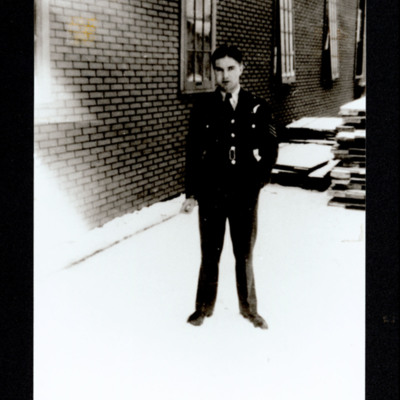 Sergeant James Spence in uniform standing in the snow outside a brick building.

Additional information about this item has been kindly provided by the donor.
View all 93 items