The album contains a varied collection of photographs taken whilst based at RAF Feltwell from 1937 onwards. There are aerial views of Windsor and Buckingham Palace, Harrow aircraft, plus social and service events. Post-war he was transferred to Singapore via India and Burma. The album reflects his social life with occasional photograph of his service activities at RAF Seletar. His return to UK via Bombay at the time of Indian independence is recorded, followed by scenic shots round Wick in Scotland. Finally there are some photographs of Angkor Thom in Cambodia. 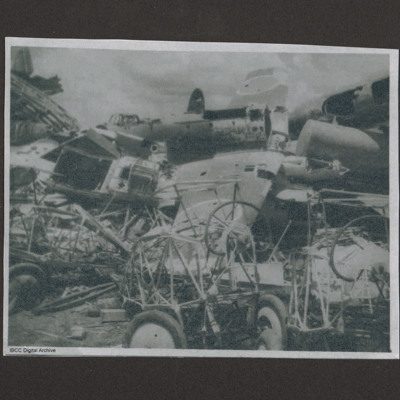 A heap of scrap which includes a Mitsubishi A6M Zero 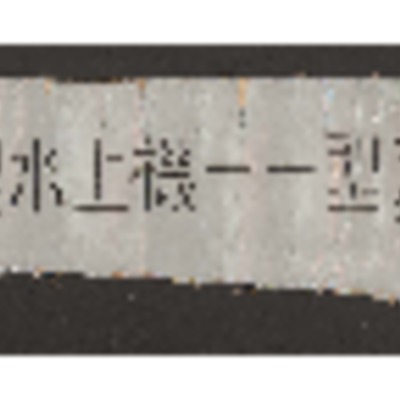 A small piece of scrap with a message in Japanese. Captioned on the reverse 'A6M3 model 22?' On a separate sheet is 'Translation Material possible from scrap yard zero. A6M Model 22? "Small above water warrior model type 1100"'. 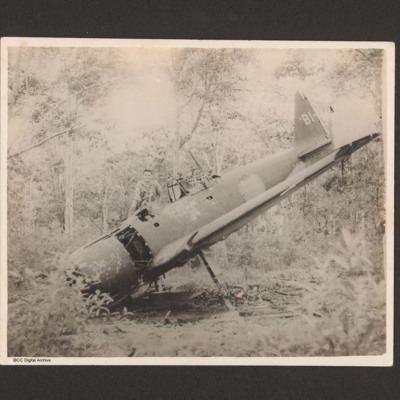 The aircraft was found in the jungle close to Seletar camp. It has nosedived into the ground. One man is standing by the cockpit. On the tail is code B1. The wing tip is hinged upwards. 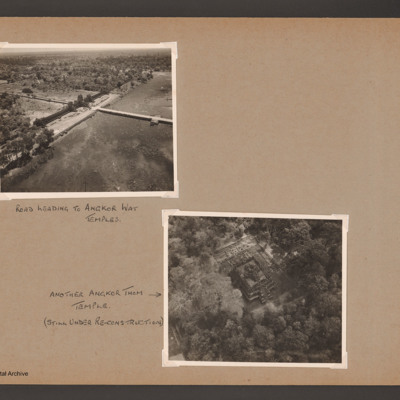 Photograph 1 is an oblique of a road across a lake captioned 'Road leading to Angkor Wat temples'.
Photograph 2 is a near vertical view of a temple captioned 'Another Angkor Thom temple (still under re-construction)'.
Photograph 3 and 4 are two… 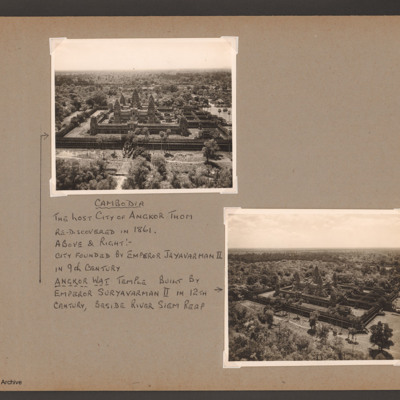 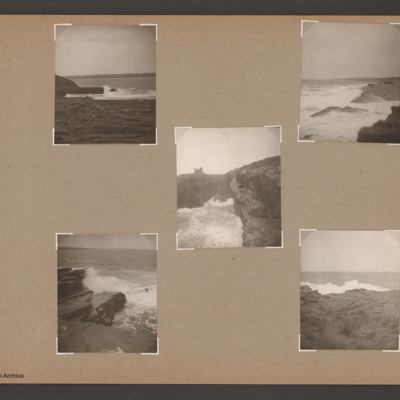 All photographs show rocks with waves crashing against them. 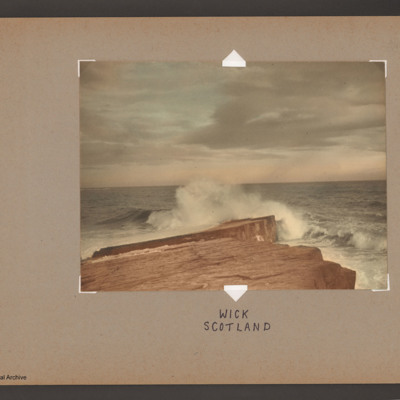 A rock outcrop with waves crashing on it. 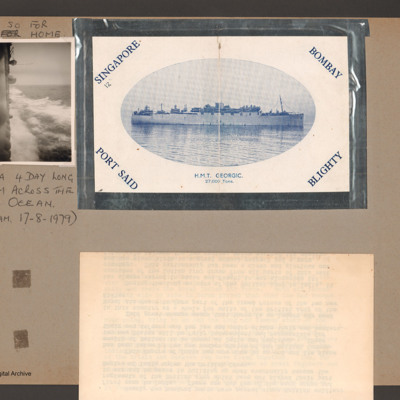 Printed card of His Majesty's Troopship Georgic. Captioned 'H.M.T. Georgic. 27,000 tons Singapore Bombay Port Said Blighty'. Photograph of the side of a ship and its wake. Captioned 'and so for home into a 4 day long storm across the India [sic]…

Letter from Claude Auchinleck to British forces serving in India 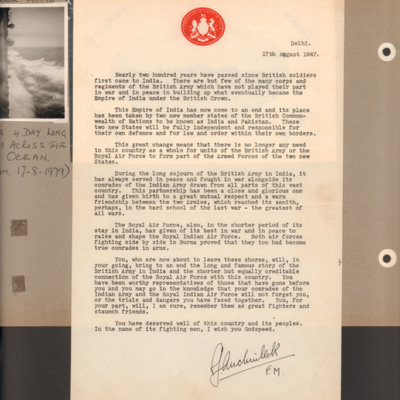 A letter from Field Marshall Claude Auchinleck to British forces serving in India. It thanks the forces for their service and wishes them Godspeed.

Storm in the Ocean and Bombay Docks farewell 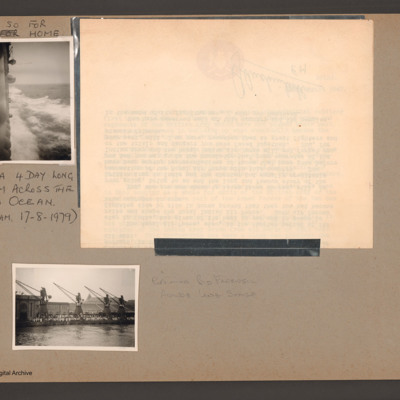 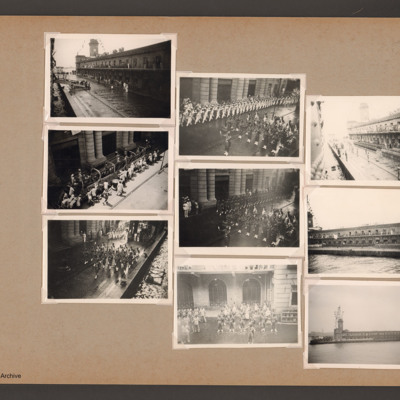 All photographs taken from the side of the ship showing people and marching soldiers on the dockside.

Nine photographs taken from the ship looking down on people on the dockside. 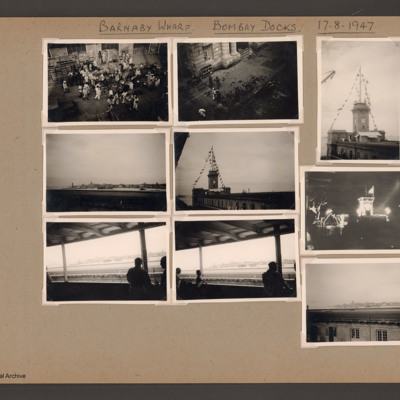 Peter comes to Singapore and views from SS Georgic 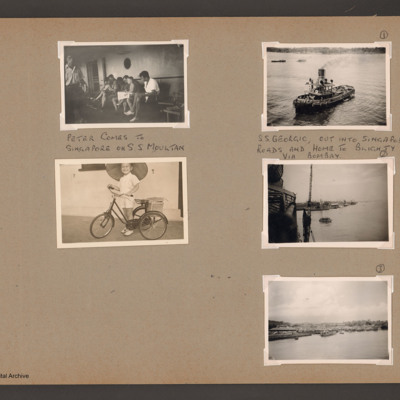 Photograph 1 is a people including Peter and his mother on the deck of a ship.
Photograph 2 is a tug captioned 'S.S. Georgic, out into Singapore roads and home to Blighty via Bombay'
Photograph 3 is Peter wearing a large hat on his bicycle.… 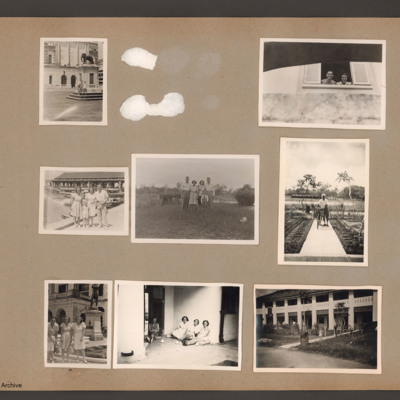 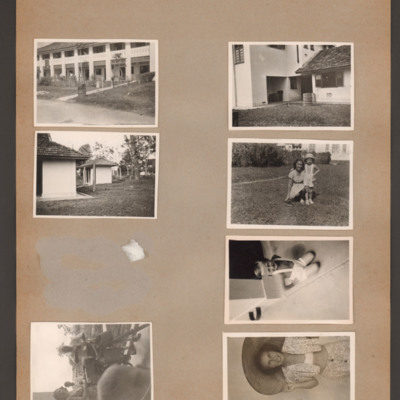 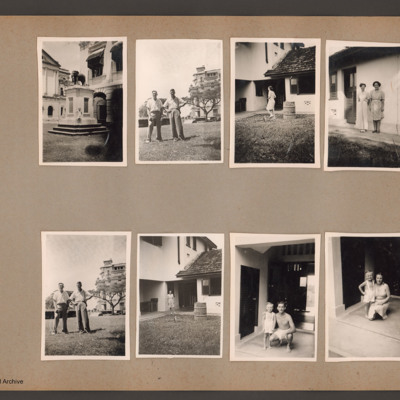 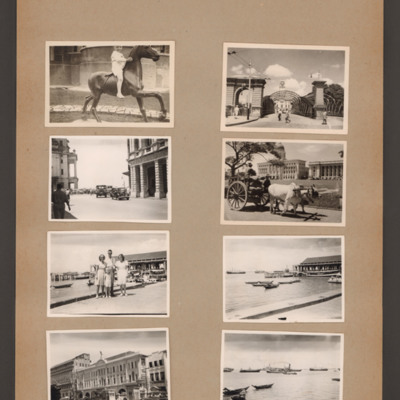 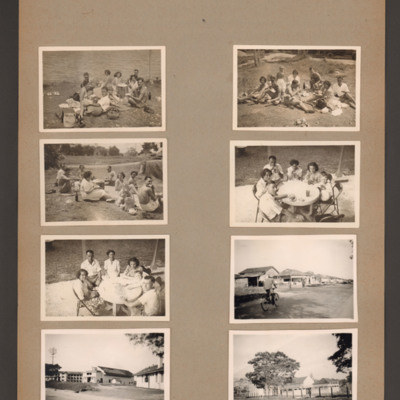 Photographs 1-5 are groups of men and women at picnics and round tables.
Photographs 6-8 are outside the married quarters. 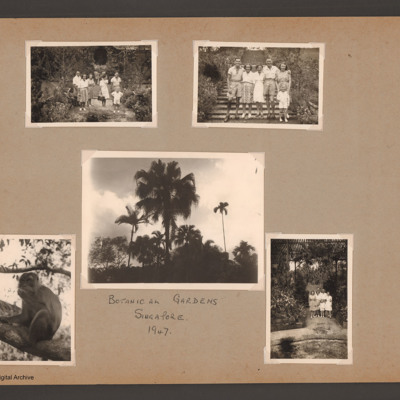 Photographs 1, 2 and 5 are of the six members of the Banks family.
Photograph 3 is of trees in the gardens.
Photograph 4 is of a monkey.
Captioned 'Botanical Gardens Singapore 1947.'