Five items. An oral history interview with Don Watson (1448934 Royal Air Force) and four photographs relating to Don Watson's wartime service with 61 Squadron at RAF Skellingthorpe. The collection has been loaned to the IBCC Digital Archive for digitisation by Don Watson and catalogued by Barry Hunter.

Donald Watson was working in the print industry before he joined the Royal Air Force in 1941. After training he served as an armourer with 61 Squadron at RAF Skellingthorpe.

A group of ground personnel, some kneeling, most standing, some dressed in fatigues but most in full uniform. Two are standing on a tractor. Behind is a Nissen hut. On the reverse '61 Sqdn Crew Don is in there Somewhere. 1944'

Lancaster and its bomb load 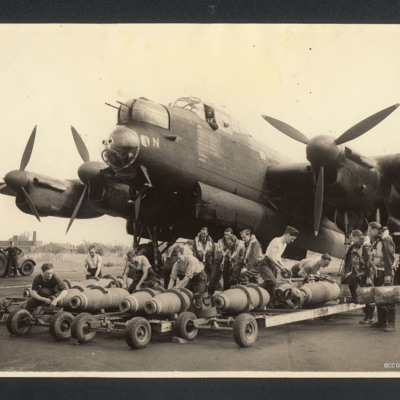 Lancaster 'N' with pilot at the controls looking out of the open cockpit window. At the nose are trolleys with bombs being prepared by seven armourers. Six aircrew wearing Mae Wests are standing behind the bomb trolley. A tractor and buildings are in…

Two Lancasters and their ground crews

Two Lancasters with engines running are being waved off by a group of ground crew. The nearer Lancaster is ED860 QR-N and the farther one is ED588 VN-G. Both have nose art depicting many operations.

Three ground crew at work on Manchester L7477, QR-N. Repairs are being made to the starboard side where there is battle damage and two men are working on panels under the wing. A ladder is propped against the aircraft.
View all 5 items