The photographs have been organised according the initial letters of the caption.

A consists of 19 photographs taken at Stalag Luft 3 prisoner of war camp in August 1942. They cover the non commissioned officers’ arts & crafts exhibition: some models are for display and others are for use; there are also paintings and jewellery.

B of 54 photographs taken at Stalag Luft 1 and Dulag Luft, covering sporting, theatrical, musical and model making activities. The funeral of Sergeant J C Shaw, who was shot whilst attempting to escape is covered with several photographs.

D consists of 42 photographs taken at Stalag Luft 3 prisoner of war camp in 1942 and 1943. They cover theatrical, musical and model activities. The plays were written or adapted by the airmen. Some of the models seen in section A are being sailed or steamed on the camp pond.

E consists of 39 photographs taken at Stalag Luft 3 prisoner of war camp in March and April 1943. They cover three plays written or adapted by the airmen.

F consists of 28 photographs taken at Stalag Luft 3, Stalag Luft 1 and Dulag Luft prisoner of war camps. They cover two plays written or adapted by the airmen. Also shown are views of the camp, four recaptured escapees, a sentry in his box, the NCOs rugby team and Christmas dinner 1940.

G consists of 38 photographs taken at the Flieger Jockey Club Gala Day at Stalag Luft 3 prisoner of war camp in August 1943. There are many varied fancy dress themes in addition to jockeys - an American cheerleader and an Uncle Sam, cowboys and Indians, a Welsh and a Scottish section, Indian (Asian) marching band, Maoris, Highland dancing, a lot of men dressed as women, bands, top hatted 'toffs'. Betting activities were carried out on the results of the hobby horse type races shown.

The collection has been loaned to the IBCC Digital Archive for digitisation by Ron Hemsworth and catalogued by Barry Hunter.

Ron Hemsworth was born in Peterborough and founded a model flying club with a friend. He joined the Royal Air Force in 1941. He flew operations as an air gunner with 76 Squadron from RAF Linton on Ouse. His aircraft was shot down on an operation to… 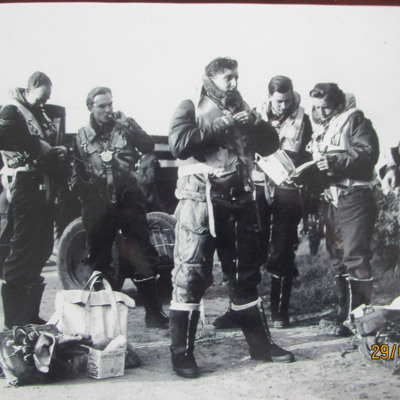 Second from the left is Flight Engineer Al Hawley, who jumped without his parachute, third is Les Thicke, who was in Stalag Luft 6 with Ron Hemsworth, fourth is Air Gunner Ron Hemsworth, extreme right is George Testal who was a fellow prisoner of… 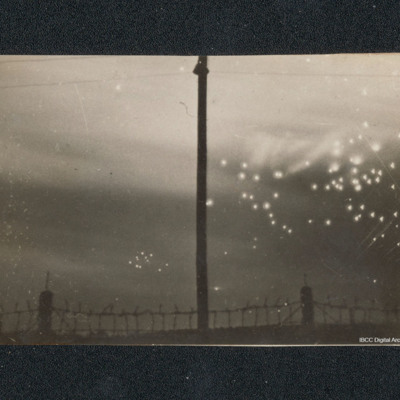 Target indicators are descending from a cloudy sky; anti-aircraft fire on the left. The silhouettes of barbed wire and an utility pole are visible. 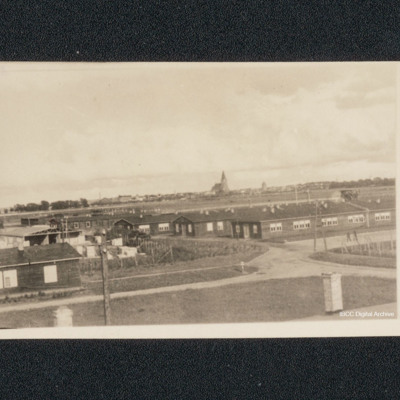 Blocks of huts and other buildings stand in the camp area. Sections of barbed wire and a guard tower are visible. In the distance, the Barth church tower. 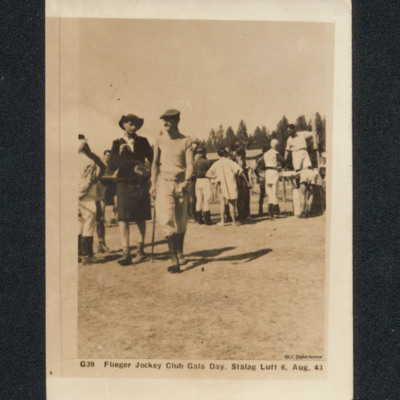 A man and a man dressed as a woman are strolling. He wears a flat cap, pullover and flannels and boots. He is using a walking stick. She is smartly dressed a skirt in a top and hat and is a carrying a handbag, Behind is a betting stall with a bookie.… 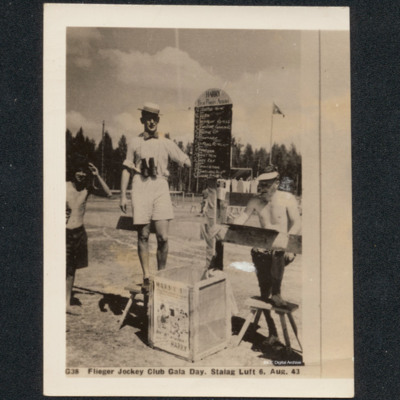 Harry's betting stall at the races. Harry is dressed in shorts, shirt, bow tie and straw hat. He also is wearing a set of binoculars. He is standing on a stool beside a blackboard with the odds. He has an assistant at his side writing on a board. He… 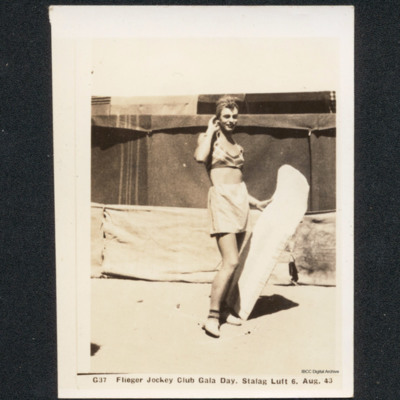 A man is dressed as a surfing woman. He is wearing shorts and a bikini top and is holding a surfing board. 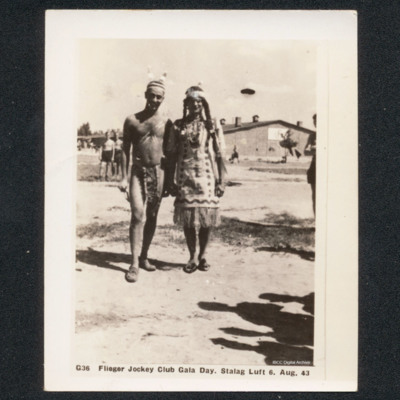 Two men dressed as Native Americans. One is wearing a loin cloth and tribal markings the other is dressed as a woman with long braids and a frilly hemmed dress. Behind two spectators look on and in the distance a hut. 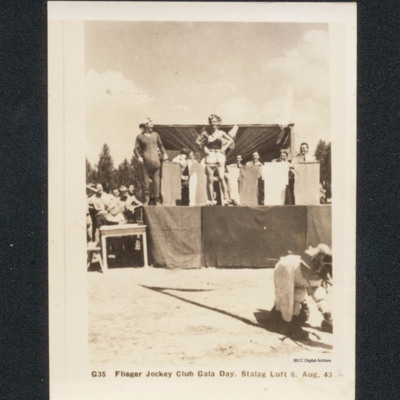 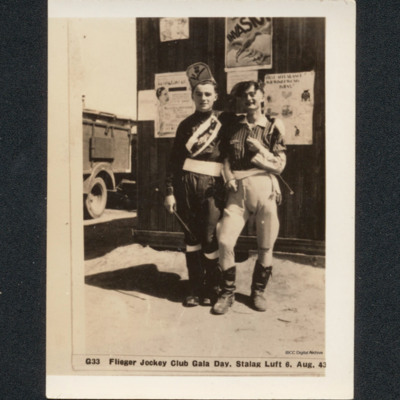 Two men dressed as jockeys, holding whips. They are standing in front of a wall with posters. At the side is a truck. 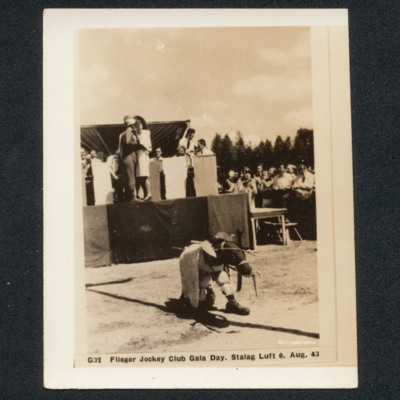 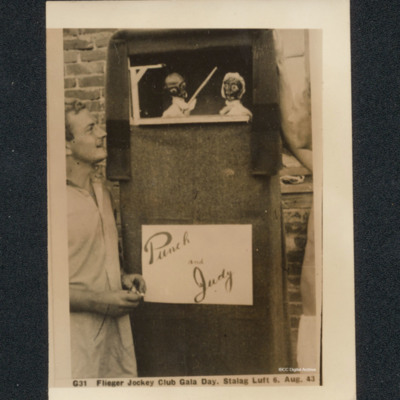 Punch and Judy stall with two puppets in action. They are watched by a spectator. On the front of the stall is written 'Punch and Judy' 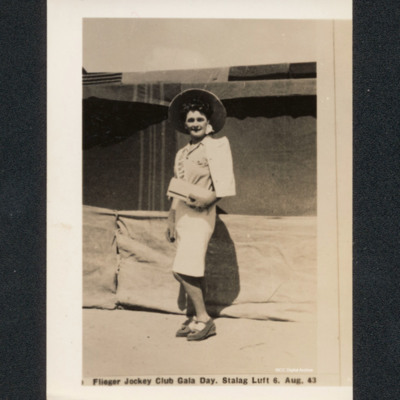 A man dressed as an elegant lady standing for the camera. He is wearing a large brimmed hat and is carrying a handbag. He has a sash with writing on it. 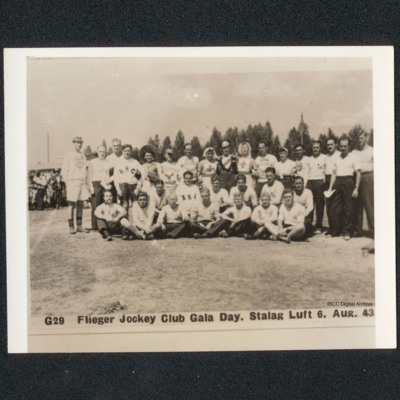 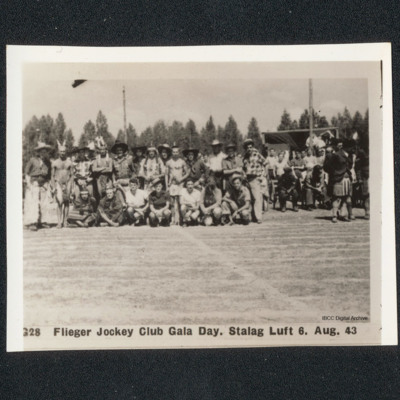 A group of men dressed as cowboys and Native Americans arranged in two rows, one standing, one kneeling or seated. Behind are many spectators and on their left a man in a kilt. 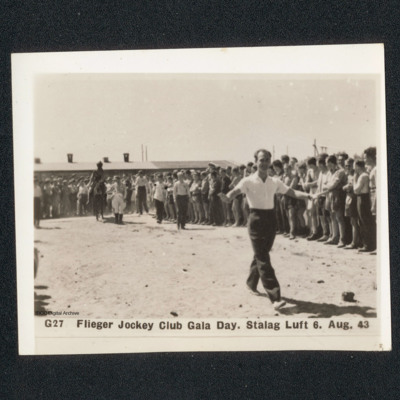 A steward is walking with his arms out-stretched, behind a horseman is walking, led by a jockey. There are many spectators and a hut behind 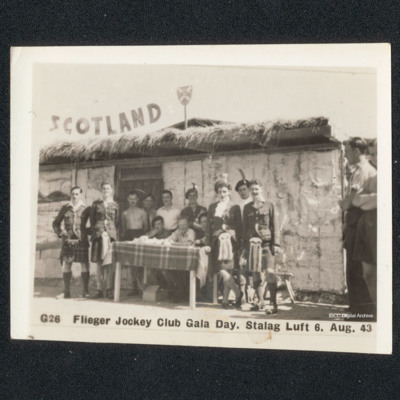 A group of 12 men, some dressed in kilts and uniform tops are standing and sitting round a table with a tartan blanket. The wall of the hut has been made to look like a mud hut and the roof has straw to make it looked thatched. On the roof is a… 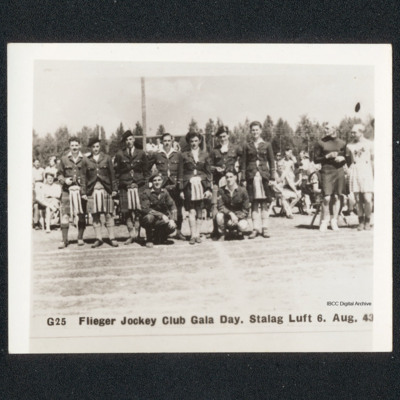 A group of eight men in kilts and uniform tops. Another man is kneeling in front of them in full uniform. At the side are two men dressed as women in short dresses. 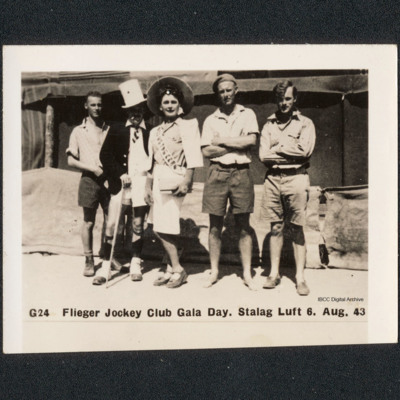 A man in top hat and tails but without trousers is with a man dressed as an elegant lady. He is wearing a sash with writing on and is carrying a handbag. There are three other men dressed casually in shirts and shorts. They are standing in front of… 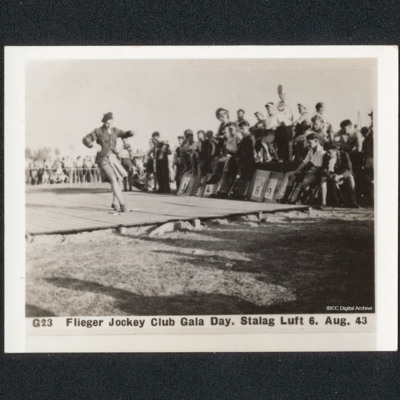 A man in kilt, uniform top and beret dances a sword dance over two crossed swords. He is dancing on the wooden platform and is watched by many spectators. There is an accordionist providing music. There are numbers on boards. 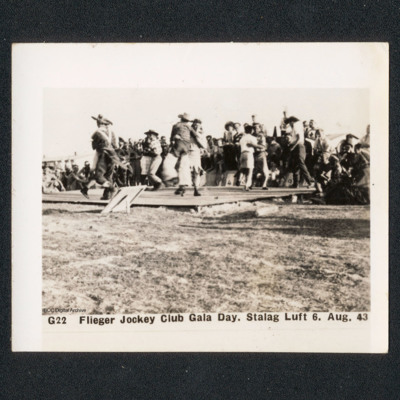 Five cowboys are dancing with five men dressed as cowgirls. They are dancing on the wooden platform and are being watched by many spectators. 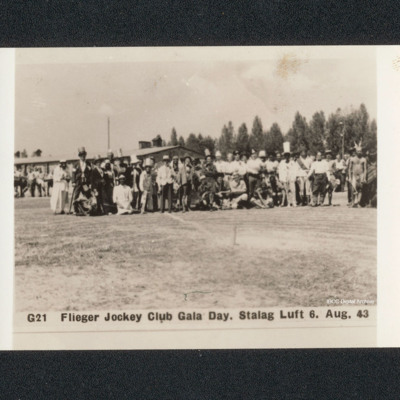 A group of men wearing top hats. On their left is a man dressed as a native in a loin cloth. Behind are many spectators and a hut. 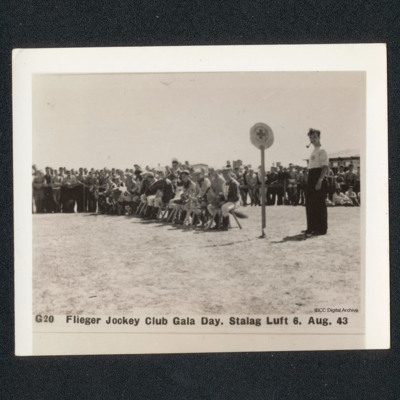 A line up of jockeys and their hobby horses ready to start. A man with a pipe stands at the finishing post/starting position. In the background there are many seated and standing spectators. 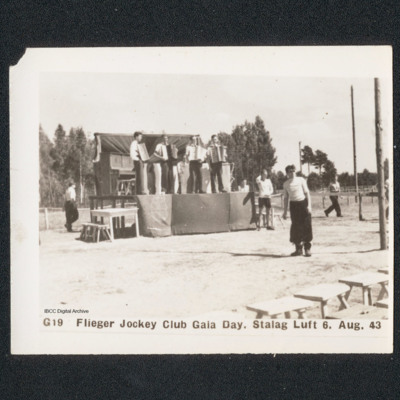 Four men standing on a raised platform playing accordions. There is a man seated at a piano behind them. In the foreground are stools for spectators. There are five men standing around. 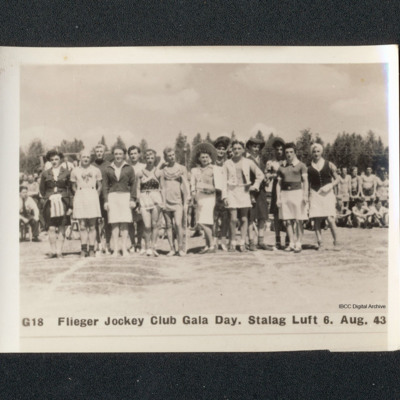 A group of 14 men dressed as women. They are dressed in a variety of clothes, skirts and dresses. They are watched by many spectators.
View all 266 items