Four items. The collection concerns Bill Garbett (b. 1925 1817435 Royal Air Force) and contains his service and release book and three photographs. He flew as a navigator with 149 Squadron.

The collection has been donated to the IBCC Digital Archive by Ann Lewis and catalogued by Trevor Hardcastle.

Service Book was completed at the No 101 Personnel Dispersal Centre R.A.F. Kirkham. Bill joined the R.A.F. on 20 September 1943 and was discharged on the 8 August 1947 as a Flight Sergeant Navigator. He undertook his flying training in Canada between…

Formal course photograph from their Initial Training Wing, 49 trainees with their four training staff, posed in front of their accommodation or school. 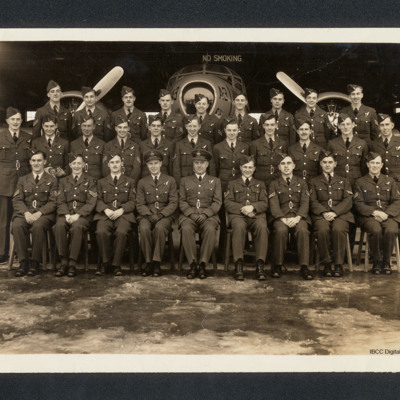 Formal photograph taken on completion of their aircrew training in Canada, the same photograph has two sets of signatures on the reverse. 27 sergeant aircrew are posed with their course officers in a hanger in front of an Anson. 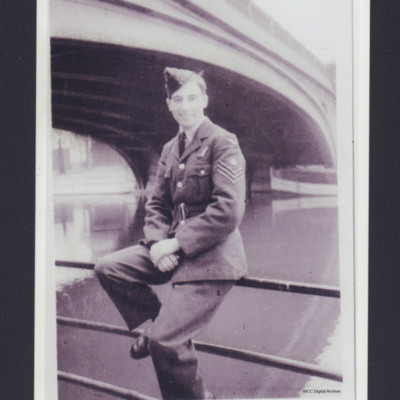 Bill Garbett perched on the railings overlooking a river with large bridge in the background.
View all 4 items