32 items. The collection relates to Flying Officer Desmond Anthony O’Connell (b. 1919, 754811 199137). He was badly burned when his 502 Squadron Whitley crashed in Northern Ireland and he became a patient of Archibald McIndoe and a member of the Guinea Pig club. The collection contains an oral history interview, two telegrams, four religious cards and Royal Canadian Air Force photographs taken at a formal the inaugural Guinea Pig Club dinner. Guests at the dinner include Charles Portal, Archibald McIndoe, Harold Whittingham, Alec Coryton and Albert Ross Tilley. The collection has been donated to the IBCC Digital Archive for digitisation by Desmond O'Connell and catalogued by IBCC staff.

Desmond O’Connell was born in London in 1919. He followed in his brother’s footsteps by joining the Royal Air Force Voluntary Reserve in 1939. He went to Cambridge to commence pilot training but half the contingent were transferred to become…

Telegram to Desmond O’Connell from the Royal Air Force

Telegram to Desmond O’Connell from the Royal Air Force with instructions to report via a specific train at London King’s Cross.

Telegram to Desmond O’Connell's father from the Royal Air Force

Telegram to Desmond O’Connell’s father informing him that he was severely burnt and in hospital, with an offer of two free return tickets if he could not afford the fare to Limavady. 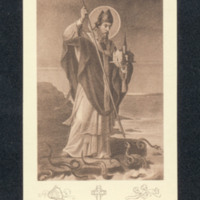 A printed card of Saint Patrick removing snakes from Ireland, captioned 'Saint Patrick pray for us', and on the reverse 'Mao Morta 44 [unclear] To dear Desmond from Deirdre'. 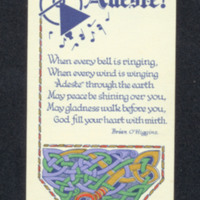 Printed card with religious message. Captioned on the reverse 'To Paddy With all best wishes from me to you. M E Meally'.

Our Lady of Quito 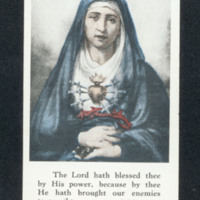 A religious card with The Virgin Mary, extract from the bible and religious text

Card with lock of hair 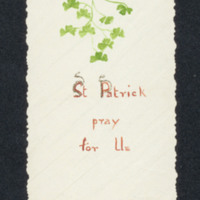 The hand drawn card has the message 'St Patrick pray for us' and on the reverse is signed 'To Paddy from M E Meally Lupe so Oro'. With the card is a lock of hair tied with blue string. The hair is in a clear bag with two sides tied with the same blue…

Three women with a donkey 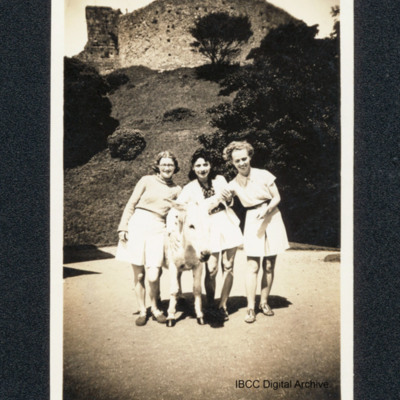 Three women in summer dresses standing with a donkey. Behind is a hill, some trees and with the ruins of a castle. On the reverse ' Sis Harrington ?? Sis Meally'. 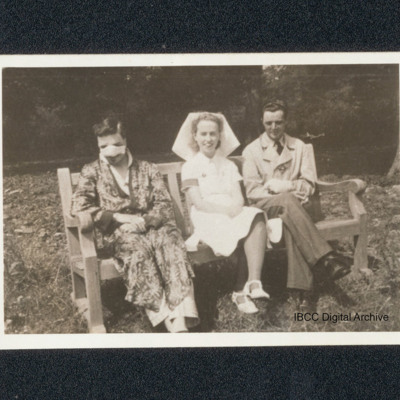 The three are seated on a bench. Sister Meally is in the middle in nurse's uniform. The patient is on her right . He has a bandage over his nose and is wearing a dressing gown and pyjamas. The man is dressed in a coat, shirt and tie. They are on a… 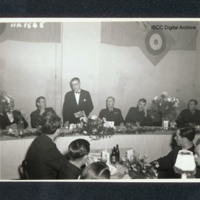 Archibald McIndoe standing and speaking. The top table guests are seated. In the foreground are the backs of several airmen seated on one of the long tables. Captioned 'HQ1545' and on the reverse 'Archie'. 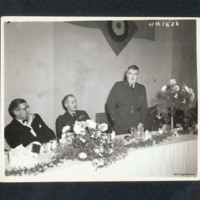 Wing Commander Ross Tilley standing and speaking, Archibald McIndoe and two others are seated at the top table. Captioned 'HQ1528' and on the reverse 'Ross Tilley RCAF'. 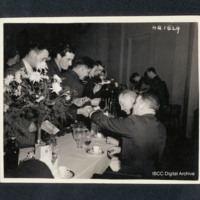 Wing Commander Ross Tilley shaking hands with airmen whilst behind an Air Chief Marshall signs a menu. They are seated at the top table with a vase of flowers and after dinner coffees. Captioned 'HQ1529' 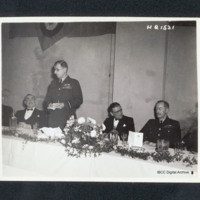 Sir Charles Portal speaking, on his left Archibald McIndoe and Sir Alec Coryton. On his right an unnamed civilian. Captioned 'HQ1531' and on the reverse 'Lord Portal'.

Airmen having their menus signed by top table guests 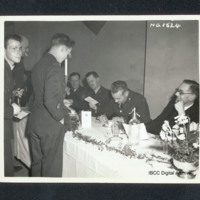 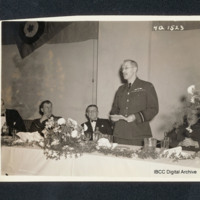 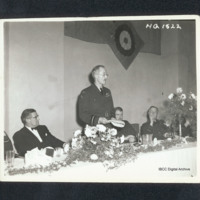 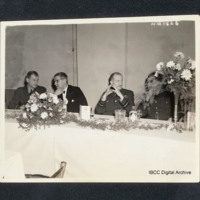 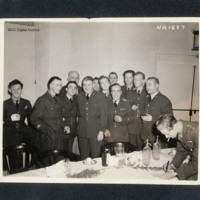 Eleven airmen standing round Wing Commander Ross Tilley whilst another signs a menu at the table. He is smoking. Some of the airmen show facial burn scars. Captioned 'HQ1527', and on the reverse 'Ross Tilley RCAF patients'. 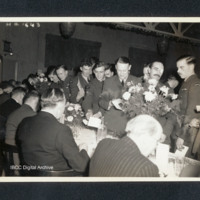 Group of standing airmen getting menus signed by four seated civilians. The civilian are at the top table at the formal dinner. Captioned 'HQ1643', on the reverse 'Roy Hocrer RCAF'. 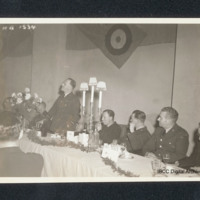 Chief Medical Officer, Air Marshall Sir Harold E Whittingham standing and six airmen seated at the top table of a formal dinner. On the table flowers and a candelabra and on the wall a Royal Air Force ensign. Captioned 'HQ1534', On the reverse…

Group of airmen and Archibald McIndoe 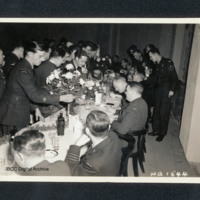 Group of standing airmen around Sir Archibald McIndoe. He is signing his autograph for members of the group. Captioned 'HQ1544'. 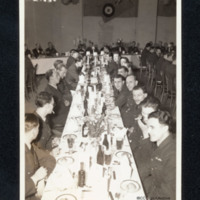 One long table of seated airmen with two further tables partly visible. In the background the top table and on the wall a Royal Air Force ensign. Captioned 'HQ1538'. 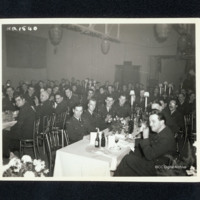 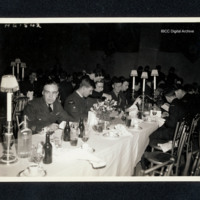 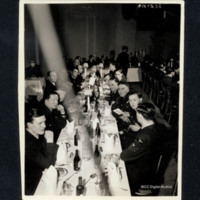 Long table of seated airmen, on the right is a second long table and in the background is the top table. Some of the airmen have facial burn scars. Captioned 'HQ1552'.
View all 32 items