Contains 89 items concerning Flying Officer Benjamin Openshaw who after training as a navigator/observer in Southern Rhodesia and England, flew with 104 Squadron in Italy. Collection consists of training notes, official personnel documents, his flying and navigation sight logbooks and photographs of people, places and aircraft. There is also a sub-collection consisting of target photographs in Italy and the Balkans as well as celebrities and London landmarks.

The collection has been donated to the IBCC Digital Archive by Kevin Angell and catalogued by Nigel Huckins. 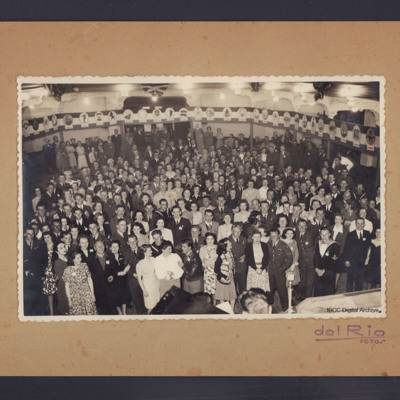 A large crowd of men and women, some in uniform, in a ballroom. Taken from above. 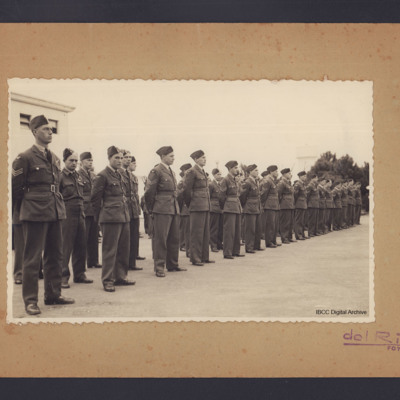 Three rows of Royal Air Force airmen on parade wearing tunic and side caps. Front row appear to be all sergeants. The man front left also has a half brevet. A large number of Royal Air Force personnel, officers in front rank, on parade in square surrounded by palm trees and buildings behind colonnades. Behind the servicemen are civilian spectators. Two officers in the front row have pilot's brevets. 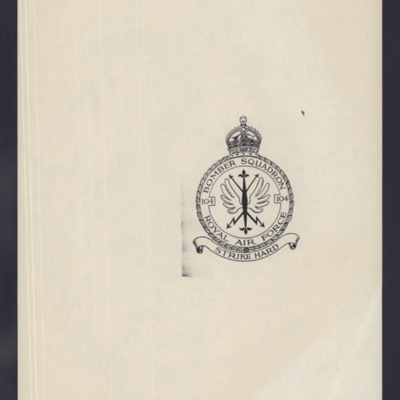 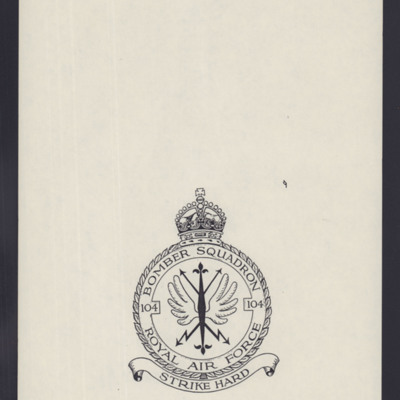 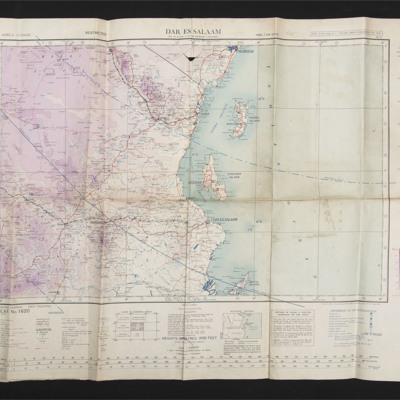 Wellington and brevet and squadron crests 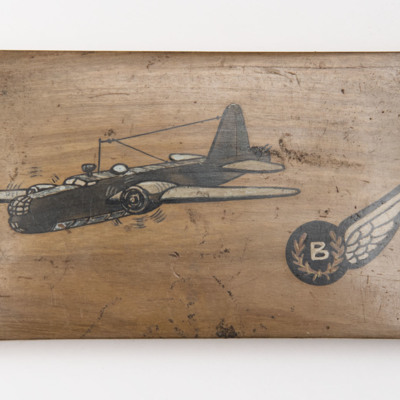 On the front a painting of a Wellington on the left and bomb aimer's brevet on the right. On the reverse painting of 104 and 37 squadron crests. Initials top left 'B.H.[.]' Bottom right 'Sorrento 44'. 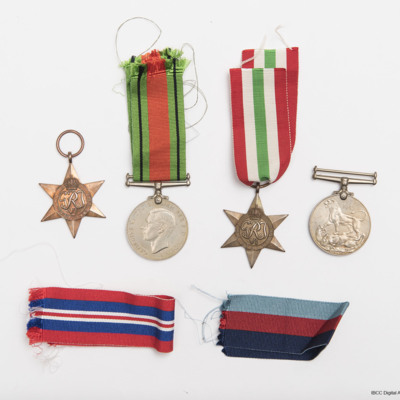 Five airmen in front of a Wellington 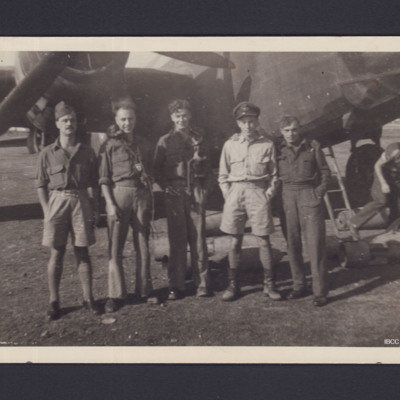 Five airmen in line wearing a variety of uniform standing in line. In the background part of the under fuselage and starboard engine of a Wellington. An aircraft ladder is visible on right with a man climbed down. On the reverse 'Mrs Openshaw, 40… 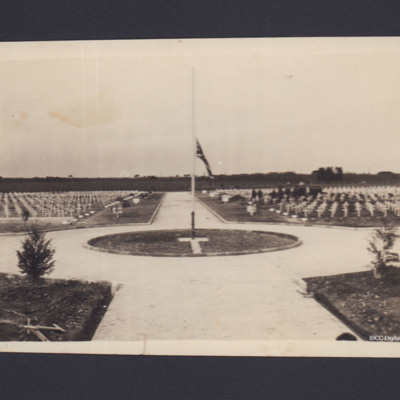 Cemetery laid out with wide paths around a circular bed with a Union flag at half mast. 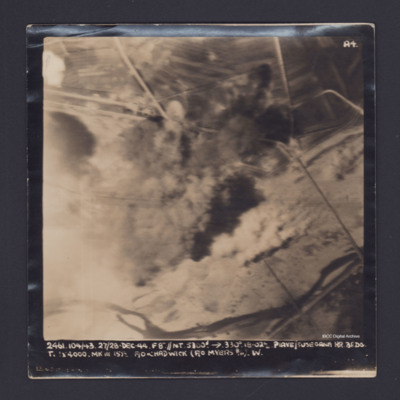 Five airmen by a Wellington 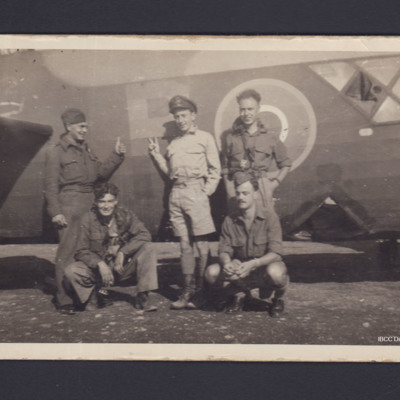 Five airmen, three standing with leftmost giving thumbs up and centre a 'V' sign behind, and two squatting in front. They are wearing a variety of uniform consisting shorts, shirts, battledress and long trousers. In the background the tail of a…

Group of airmen in front of a Hudson 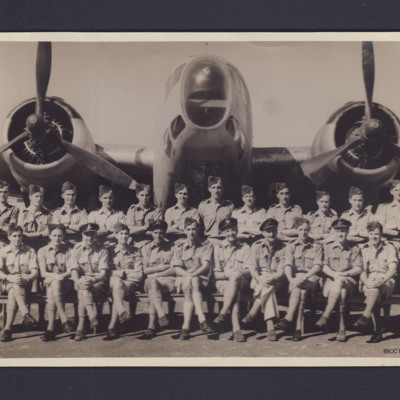 Twenty-three airmen in two rows sitting on a bench in front and standing behind in front of a Hudson. All are wearing khaki shorts and shirts and either side or peaked caps.

Sticker on back of photograph 'This photograph must not be reproduced… 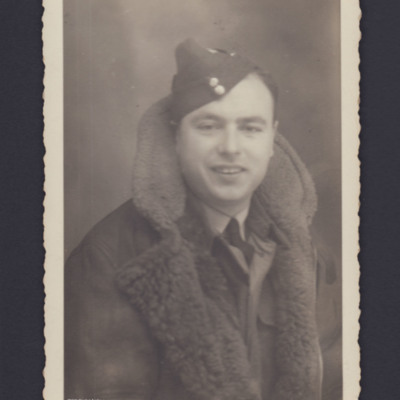 Half length portrait of an airman wearing sheepskin flying jacket and side cap. 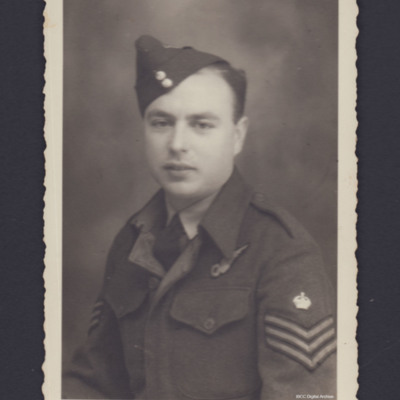 Half-length portrait of an airman wearing battledress, with observer brevet and flight sergeant rank, and side cap. 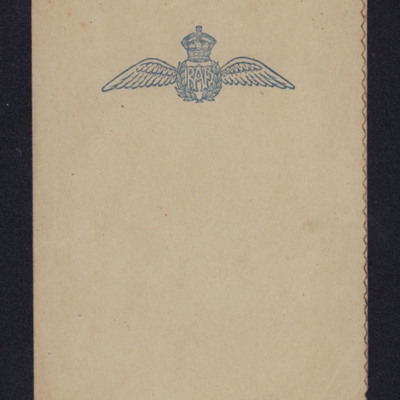 Card font cover - Royal Air Force wings at the top. Inside right a half length portrait of Ben Openshaw wearing tunic, white belt and side cap.

Group of men by Chania falls 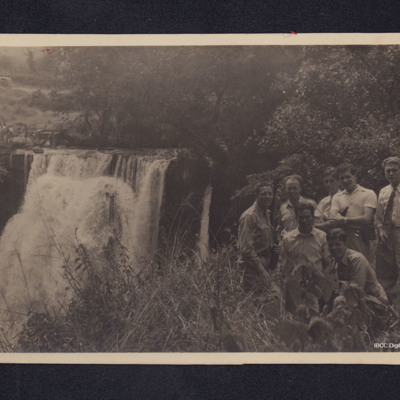 Seven men wearing a mix of civilian and military dress squat and stand in long grass on the right side. On the left is a waterfall, with other men and vehicles beyond it in the distance. 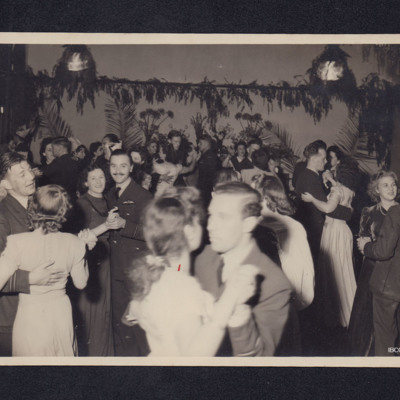 Large group of Royal Air Force officers dancing in a large room with lady guests. The room is decorated with foliage. 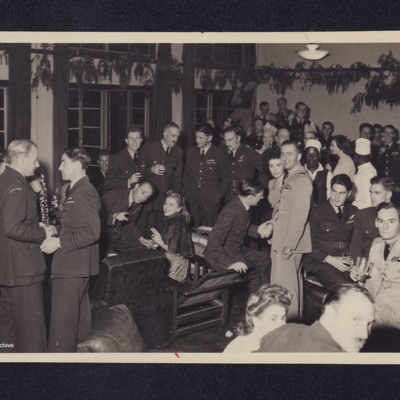 Large group of officers all wearing blue or Khaki tunics many with brevet with female guests at a party. The room is decorated with foliage.

Large group of airmen in front of a Hudson 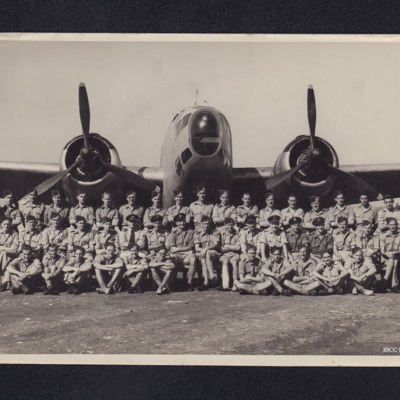 A large group of airmen sitting and standing in three rows in front of a Hudson. All are wearing khaki shirts and shorts with side caps or peaked caps. 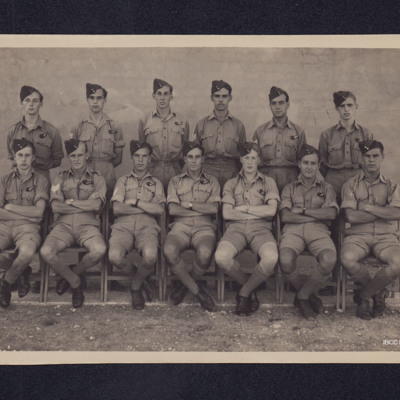 Thirteen airmen in two rows: front sitting, rear standing. All are wearing khaki shirts and shorts with side cap. Most are sergeants and all except two have half brevets. 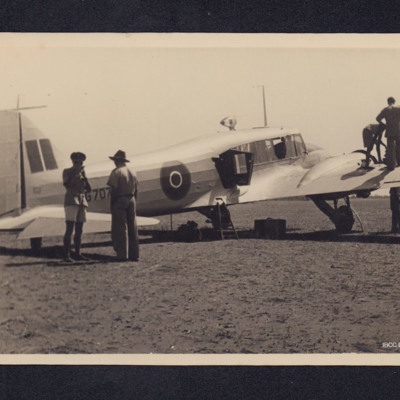 An Anson (registration [..]G707) with door open stands on airfield. Two man stand by the tail. Two men are on the wing refuelling while a third stands on the ground behind a fuel bowser. 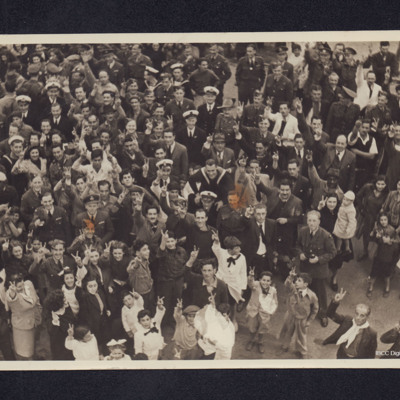 View looking down on a large crowd of people. Visible are men and women, civilians and military many holding up hands showing 'V' signs.

Group of men by Chania Falls 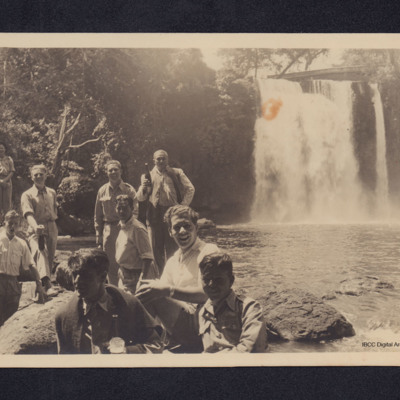 A group of men wearing a mixture of uniform and civilian dress sitting and standing on a bank at the bottom of a waterfall. 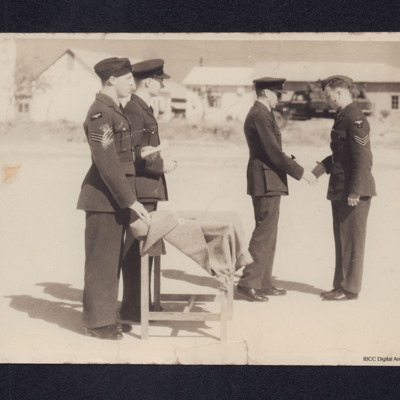 On the right side an officer is shaking hands with Sergeant Openshaw. On the left, an officer and a sergeant stand behind a table covered with a blanket. All are wearing Royal Air Force uniform tunic and peaked or side caps. In the background are…
View all 89 items