309 Items and a sub-collection of 51 items. Concerns Royal Air Force career of Wing Commander David Donaldson DSO and bar, DFC. A pilot, he joined the Royal Air Force Reserve in 1934. Mobilized in 1939. he undertook tours on 149, 57 and 156 and 192 Squadrons. He was photographed by Cecil Beaton at RAF Mildenhall in 1941. Collection contains a large number of letters to and from family members, friends as well as Royal Air Force personnel. Also included are personal and service documents, and his logbooks. In addition, there are photographs of family, service personnel and aircraft. After the war he became a solicitor. The collection also contains an oral history interview with Frances Grundy, his daughter.

The collection has been loaned to the IBCC Digital Archive for digitisation by Anna Frances Grundy and catalogued by Nigel Huckins.

Service history of David Donaldson including postings, promotions and awards.

David Donaldson reminisces an operation on Turin, describing the crossing of the Alps at night and the awe-inspiring sight of Mount Blanc. David stresses the uniqueness of the operation, only comparable to a previous one on Munich, and mentions the…

David Donaldson and other aircrew member by a Wellington 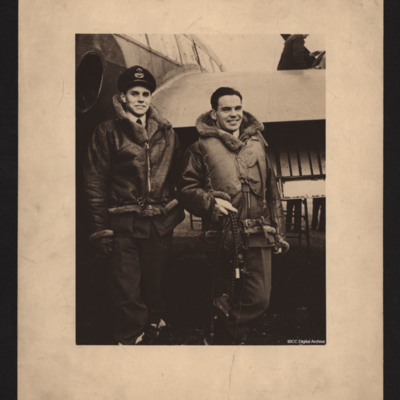 Two aircrew wearing leather flying jackets with fur collars standing behind the wing root of a Wellington. David Donaldson is on the right. Flaps on aircraft are down. 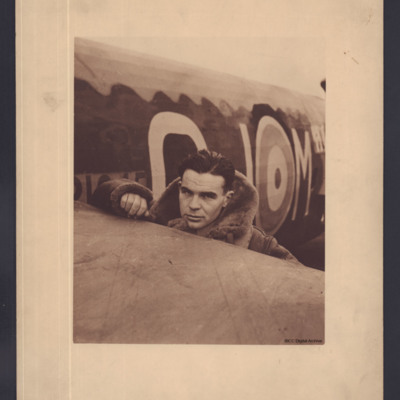 Head and shoulders of David Donaldson wearing flying jacket with fur collar looking over the back of wing of a Wellington. 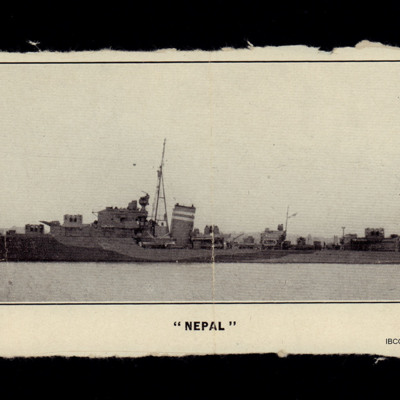 Warship afloat captioned 'HMS Nepal'. This was the ship launched by Joyce Donaldson. Additional information about this item was kindly provided by the donor.

Ten pilots in front of a Hawker Henley 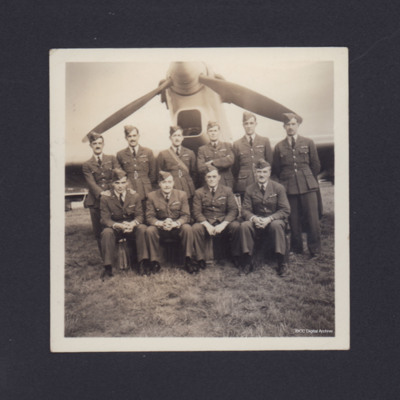 Ten pilots, four sitting in front and six standing all in front of a Hawker Henley. All are wearing Tunic and side caps. David Donaldson is left side front row. 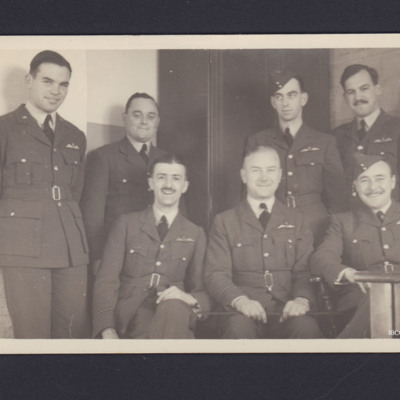 Seven pilots, three sitting in front and four standing behind in a room. David Donaldson is standing on the left. 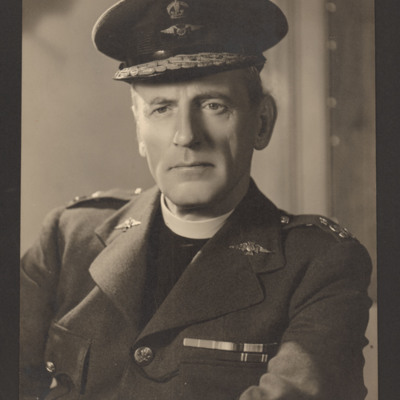 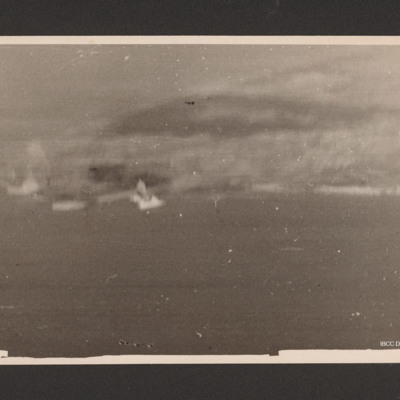 Target photograph of bomb explosion on a coastline running across image. On the reverse '192 Squadron, Attack on Walcheren, Oct 1944'.

Group of Royal Air Force personnel in front of a Halifax 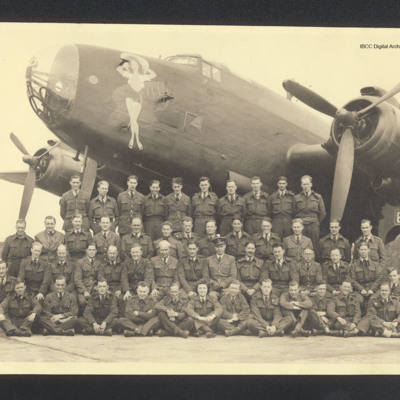 Fifty Royal Air Force personnel sitting and standing in four rows in front of a Halifax. There is a pilot in second row centre right wearing peaked cap and a WAAF sitting in the centre. Nose art on the aircraft is a showgirl with hat. 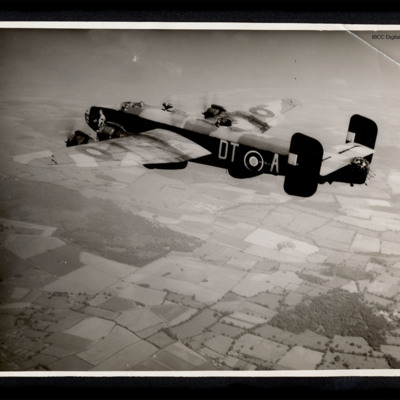 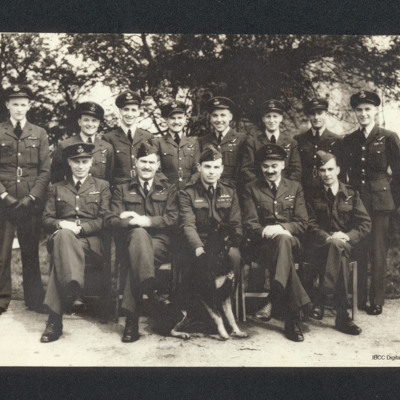 Thirteen aircrew in two rows wearing tunic or battledress. Five are sitting in front with a dog 'Dusky' in the centre. David Donaldson is centre front. In the background trees. Other personnel identified as: rear row left to right: Flight Lieutenant … 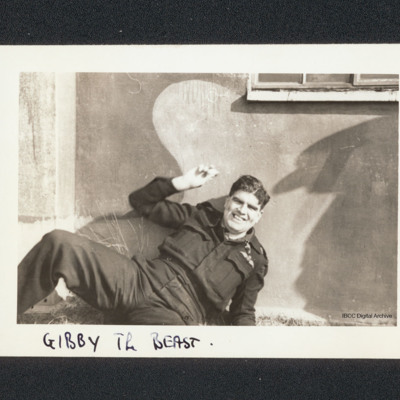 A pilot, wearing battledress, laying on the ground waving. In the background the camouflage painted wall of a hut. Captioned 'Gibby the beast'.
Additional information about this item has been kindly provided by the donor.

Five aircrew in front of hut 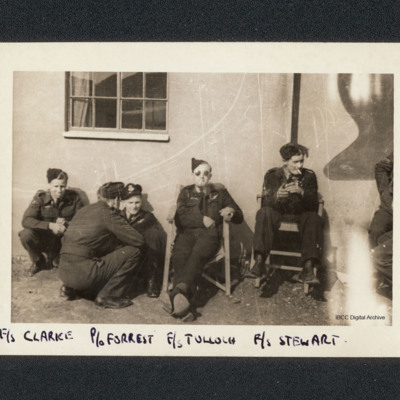 David Donaldson with crew of Halifax 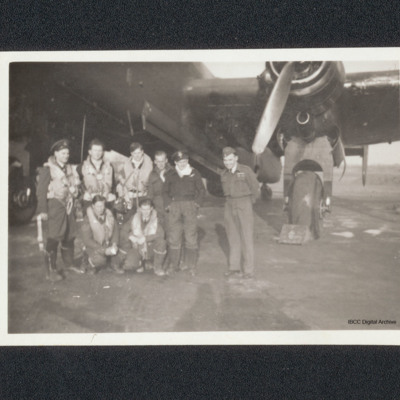 A group of seven aircrew standing and squatting wearing a variety of flying clothing in front of a Halifax. David Donaldson wearing battledress is standing to the right. 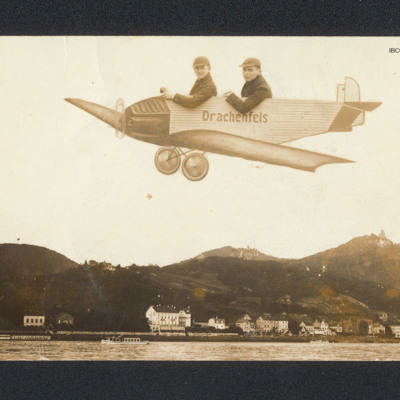 Made up photograph of two men wearing school caps seated in a drawn single engine aircraft placed on a photograph of a coastal background with hills and buildings with sea in the foreground. David Donaldson is on the right. 'The word 'Drachenfels' is…

Six aircrew in front of a Wellington 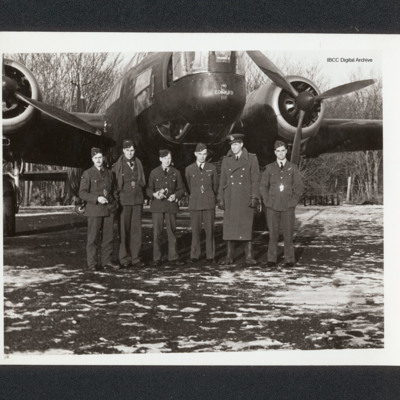 Six aircrew, five wearing tunic and the sixth a greatcoat standing in line in front of a Wellington. Aircraft has 'Edward III' on the nose. On the reverse 'Crew of Edward III, Jan? 1940'. David Donaldson is fourth from left.

Three aircrew in front of hut 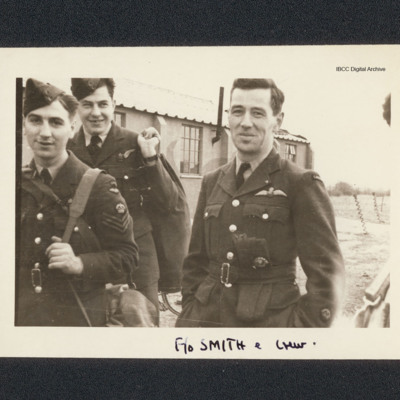 Three aircrew wearing tunic and side cap. On the right front a pilot warrant officer, front left a flight sergeant. Behind an airman with half brevet carrying a duffel bag over his shoulder. In the background a hut. Caption 'F/O Smith and crew'. 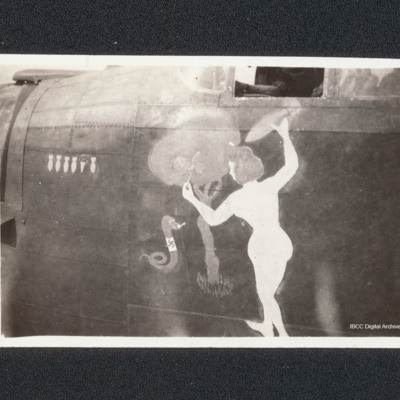 Nose art of a woman throwing bomb at a tree with a serpent on the other side. Forward of the cockpit six bomb symbols. 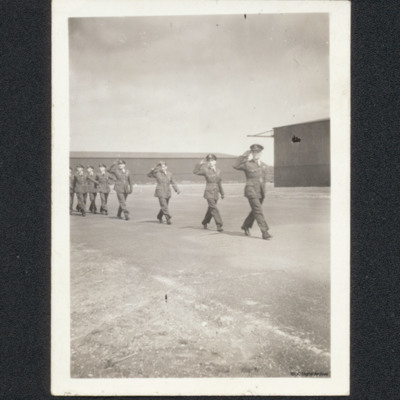 Four officers in line leading a group of airmen. All four are saluting. David Donaldson is leading. In the background hangars. On the reverse 'Roy Kendrick, Warrant Officer, Adam Louden, DWD.' 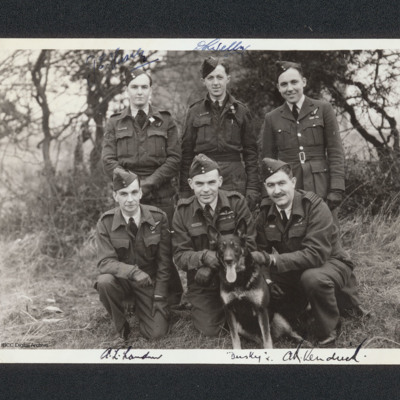 Six aircrew all wearing battledress and side cap. Three kneeling in front and three standing behind. David Donaldson is centre front holding dog 'Dusky'. Ken Churchill is standing back row, right. Two signatures and dog's name along the bottom. In… 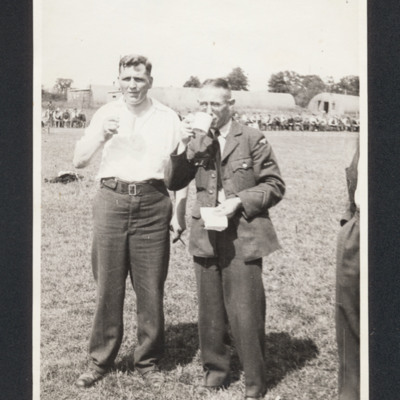 Two men standing in a field. The one on the left is in shirtsleeves and the one on the right is wearing Royal Air Force tunic unbuttoned. Both are drinking from mugs. In the background a line of seated spectators and Nissen huts. On the reverse 'Cpl… 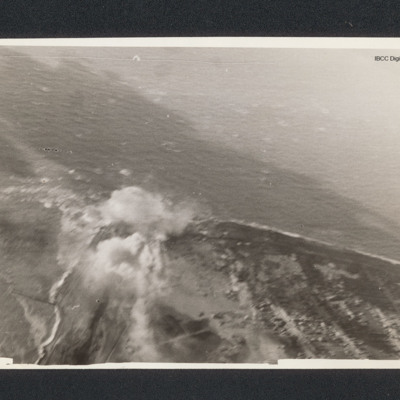 Target photograph of a coastline running from bottom right to centre left then bottom left. There is a bomb explosion centre left.

Group of pilots in front of Hawker Henley 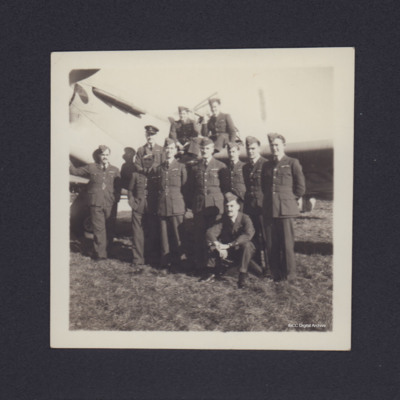 Ten pilots, eight in front of and two sitting on the wing of a Hawker Henley. All are wearing tunic and side caps. David Donaldson is second from the right.

Woman and children in a garden 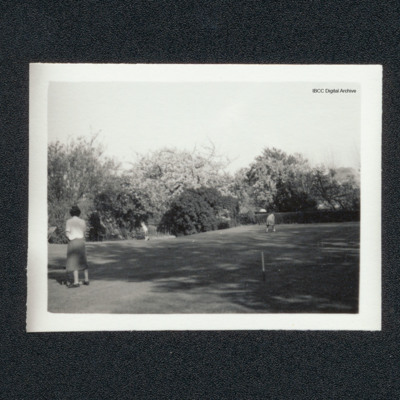 Joyce Donaldson stands on the left with Frances Donaldson and her brother on the other side of the lawn. Large garden is surrounded by trees. Additional information about this item was kindly provided by the donor.
View all 306 items