Seven items. The collection concerns the career of Warrant Officer John Frederick ‘Jack’ Taylor DFC (630955, Royal Air Force). Jack Taylor completed 66 operations as a flight engineer with 15 and 138 Squadrons flying Stirlings and Halifaxes. The collection contains photographs of personnel and of Halifaxes both in flight and on the ground.

The collection has been donated to the IBCC Digital Archive for digitisation by his grandson John Hurt and catalogued by Trevor Hardcastle. 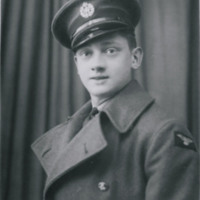 Head and shoulders portrait of Jack Taylor as an airman, in greatcoat and peaked cap. Curtain as background.

Eight aircrew in front of the rear turret of a Stirling 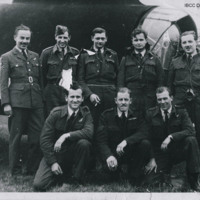 Eight aircrew, in two rows, are standing in front of a four-gun rear turret of Stirling. All are in uniform, two with pilots brevet, others single wing.

Servicemen in front of Stirling 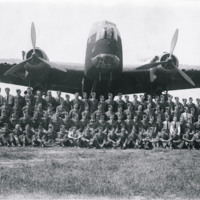 Squadron photograph of 99 servicemen in four rows in front of Stirling. All are in uniform, some are in shirt sleeves and some are without hats. Aircrew and ground crew, officers and other ranks appear in the picture. 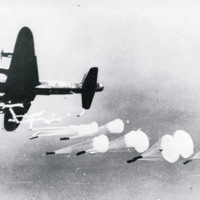 Air-to-air photograph of a Stirling from below dropping containers, some with parachutes deployed, others deploying. Bomb doors are open, flaps extended. 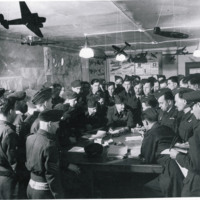 A group of aircrew attend a briefing, standing round a paper-strewn table, all in uniform. They are in a large room, with maps and posters on walls, and aircraft recognition models suspended from ceiling. 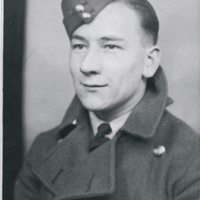 Half-length portrait of a Royal Air Force serviceman in uniform, side cap and greatcoat. 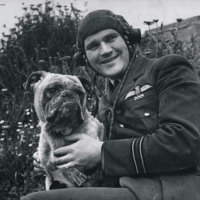 Flight Lieutenant Ron Barr is seated in uniform with a dog in front of a hedge. He has rank braids on sleeve and pilot's brevet, Distinguished Flying Cross medal ribbon, flying helmet, and oxygen mask. A bulldog 'Pilot Officer Prune' with studded…
View all 7 items