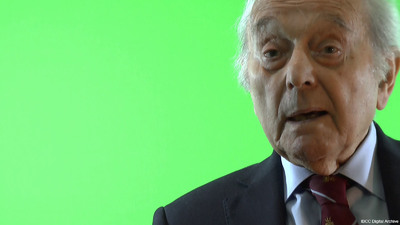 Benny Goodman grew up in London and hoped to become a pilot. He volunteered for the Air Force and was originally posted to RAF Abingdon as a ground gunner before beginning his flying training. After qualifying as a pilot in Canada, he became an instructor to Navy pilots. He survived his ship being torpedoed before he finally joined the Queen Mary in New York and returned to England. He flew operations with 617 Squadron and discusses a fire in the cockpit of his Lancaster, narrowly missing and mid-air collision and flying alongside a Me 262.