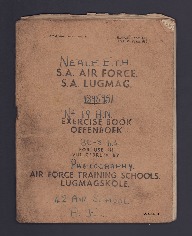 A notebook kept by Ted Neale with his notes recorded during training in South Africa with 42 Air School, Port Elizabeth.

One notebook with handwritten notes

Having this choice of lenses of varying focal lengths permits the required scale to be obtained, from a considerable height to avoid Ack-Ack interference, or to minimise the effect of exaggerated ground contours & also when forced to fly low by advese [sic] weather conditions. To simplify the demanding of photographs 3 main categories of scales are laid down as follows,

A film camera using a maximum loading of 125 exposures & producing a 5” x 5” negative; it is an all purpose camera being used for vertical photography & for fixed & hand held obliques. There are 3 methods of use, one hand, 2. Semi-Automatic 3, Fully Automatic

There a 5 main units to the camera.

The 60% forward overlap is necessary in other than 2 views of each piece of country may be obtained, the photos may then be used in a stereoscope.
The lateral overlap should be 30% so as to ensure that all strips do all overlap over their whole length.
[sketch] W = Width of film in inches
F = Focal length of lens in inches
H = Ht in feet.
L = Ground covered in feet.
[page break]
[deleted] WL [/deleted] The letters W.L.F.H. placed in that order may be remembered by the phrase “Whilst looking for flight”. bracket the two outer letters together & the 2 inner, the letter bracketed with the unknown quantity is always used as the denominator. Thus
[calculations]
By the above equations any one unknown quantity may be found if the other 3 be known.
To determine the time interval in Seconds required between exposures to obtain a 60% overlap. Taking “L” as being the ground covered by each photograph less the overlap then “T.I.” equals
[calculation] W equals effective width of photo in inches (2 inches) H = HT in feet V = Ground speed in ft per sec. F = Focal length of lens in [underlined] ins [/underlined]
[page break]
The scale of a photograph is
[calculation]
eg. To make a mosaic of an area 4 miles x 2 miles H = 5,000 ft. W = 5 ins. V = 90 mph. to bring mph to [underlined] fps [/underlined] multiply by 22/15 or 3/2 approx. F = 6 ins.