Collection contains 18 items concerning Sergeant Harry Sidney Brooks (1915 - 1942, 1357673, Royal Air Force) who was killed in an aircraft accident 20 December 1942 while serving as a wireless operator with 9 Squadron at RAF Waddington. Collection consists of pages from logbook, letters and telegrams to his wife from Harry Brooks, Brooks' father, official sources and others of condolence as well as photographs of him and family.

The collection has been loaned to the IBCC Digital Archive for digitisation by Pamela Tickner and catalogued by Nigel Huckins.

Additional information on Harry Sidney Brooks is available via the IBCC Losses Database. 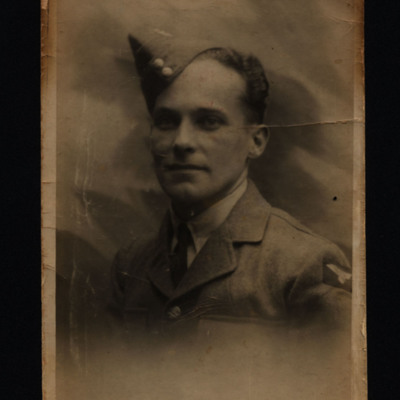 Head and shoulders portrait of Harry Brooks wearing tunic and side cap.

Additional information about this item was kindly provided by the donor 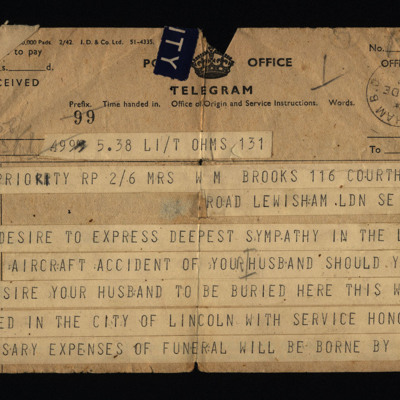 Expresses sympathy for the loss of her husband in an aircraft accident. States that if she desires her husband to be buried 'here' it would be arranged in the city of Lincoln with service honours. The expenses of the funeral would be borne by the… 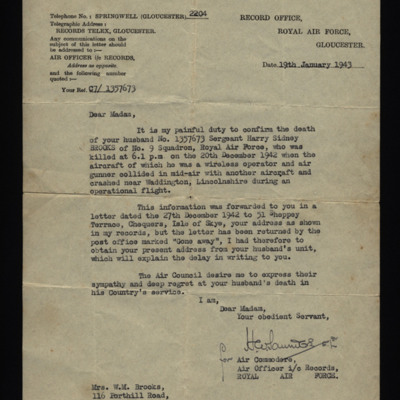 Confirms the death of No 1357673 Sergeant Harry Sidney Brooks of 9 Squadron who was killed in a mid-air collision on 20 December 1942, crashing near Waddington, Lincolnshire. Explains delay in writing due to information being initially sent to… 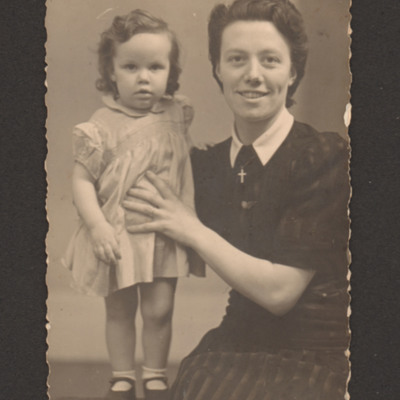 On the right a three-quarter length portrait of a woman wearing dark dress with crucifix on necklace. She is holding on to a 17-month-old young girl who is standing on the left wearing a light coloured dress.

Additional information about this… 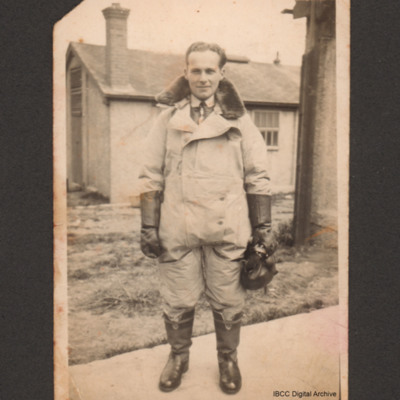 Full length portrait of Harry Brooks wearing Sidcot suit and gloves and holding a flying helmet. In the background is a single storey building.

Letter from Sergeant A Pelly to Mrs Brooks 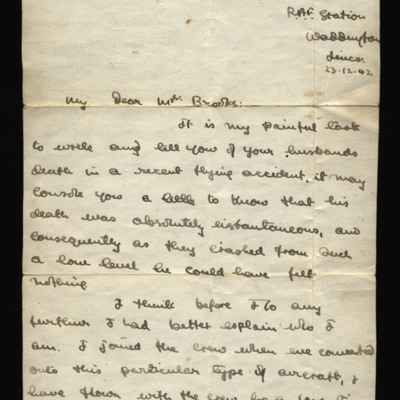 Writes to tell Mrs Brooks about her husband's death as a result of a recent flying accident. States that it was absolutely instantaneous and that, as the crash had been from a low height, he would not have felt anything. Explains that he had been… 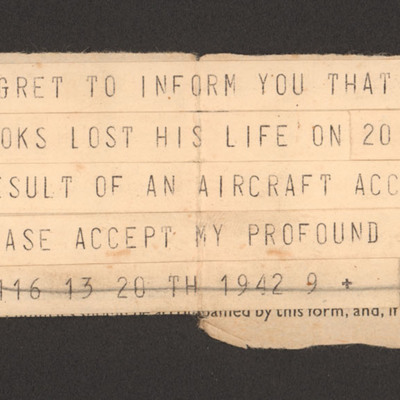 Regrets to inform Mrs Brooks that her husband Sergeant Harry S Brooks lost his life on 20 December 1942 as a result of an aircraft accident and that a letter is to follow.

Letter of condolence from Doris to Mr Moth 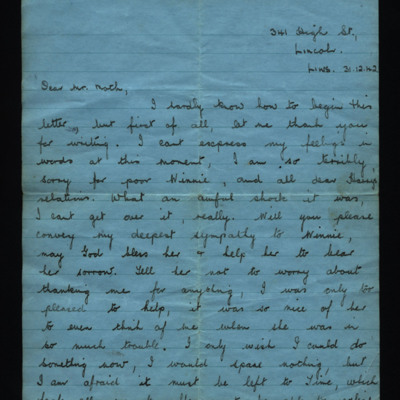 Letter to Mr Moth from Doris explaining how sorry she feels for Winnie and all of Harry Brooks' relations and asks recipient to convey her sympathy to Winnie. Apologises that she had insufficient time to wire a wreath for Harry's funeral.

Letter to Harry Brooks' wife Winnie from his father 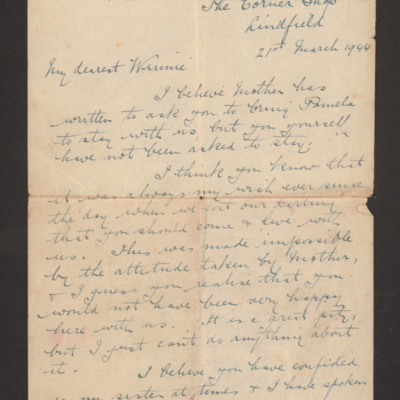 Letter from Harry Brooks' father ('Pop') to his daughter-in-law Winnie. His wife has written to Winnie asking that her daughter Pamela be sent to stay with them but without inviting Winnie herself. He does not agree with his wife's attitude towards… 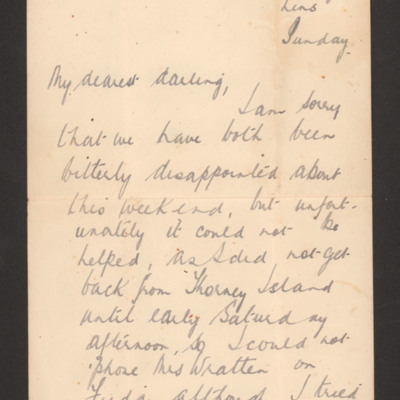 Harry Brooks write to his wife apologising that he couldn't see her at the weekend. He also tells her that he has been unwell and unable to buy her a birthday card. He says how much he loves her, and talks about possible arrangements for the next… 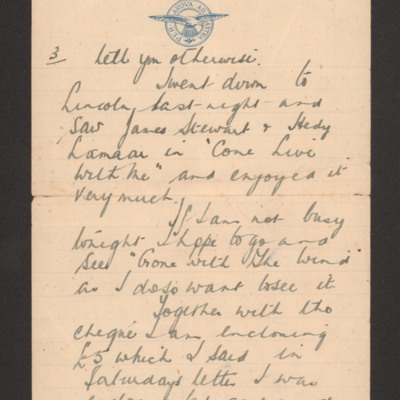 Incomplete letter telling his wife about going to see one film and hoping to go and see 'Gone with the Wind'. He goes on to say he is enclosing £5 cheque for her to buy a coat. Concludes both sending love to her and daughter. 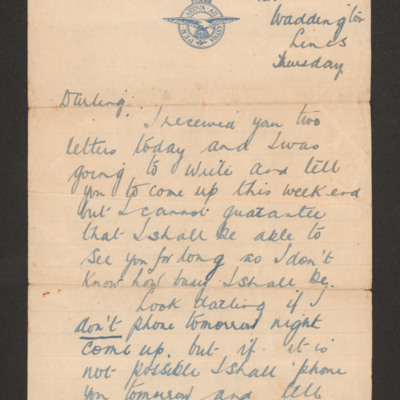 Letter from Harry Brooks at RAF Waddington to his wife. He talks about arrangements for her coming to visit and he hopes he can get the time off. 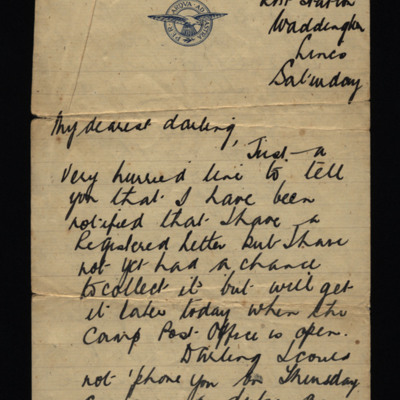 Letter from Harry Brooks to his wife explaining why he did not manage to telephone her. He also apologises for not writing before, but says that he has been very busy, and promises to write the following day. Sends his love to wife and baby and is… 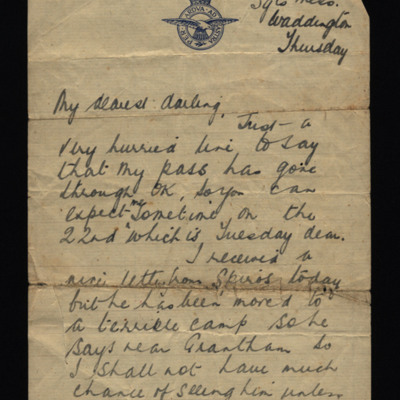 Letter from Harry Brooks to his wife telling her that his pass has been approved and he will see here on 22nd. He says that he has received a letter from Spiros who has been moved to 'a terrible camp, so he says' near Grantham. He finishes by…

Letter and telegram from Harry Brooks to his wife 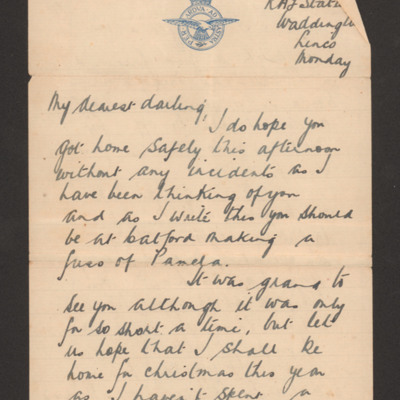 An undated letter from Harry Brooks at RAF Waddington to his wife. He writes about her short visit and hopes to be home for Christmas. He mentions the possibility of his wife having to go into hospital and tells an anecdote of something that happened…
View all 16 items