10 items. An oral history interview with Leading Aircraftswoman Margaret Cuthill (b. 1926, 2151005 Royal Air Force) (nee Logan), a written memoir, her service and release book and seven photographs. She served in the Women's Auxiliary Air Force from May 1944 to October 1947 as a teleprinter operator.

The collection has been loaned to the IBCC Digital Archive for digitisation by Margaret Cuthill and catalogued by Barry Hunter.

Margaret is standing in uniform in front of flowers and Nissen huts.

29 airwomen arranged in three rows. Margaret is seated, fourth from right. Behind is a prefabricated building with 'WIN' painted at a door.

Four seated on a rug and three kneeling behind. Margaret is front row, far left. Behind are nissen huts.

Margaret is kneeling at the front of a group of five WAAFs. Behind are Nissen huts and flowers.

Margaret is at the back row, left. Three are sitting on a grassy mound and three are standing behind.

Group of five, the four women in uniform, the man in civilian clothes. Margaret is second from right. They are standing amongst grass with a boundary wall behind.

Seven airmen standing at the rear of a Lancaster 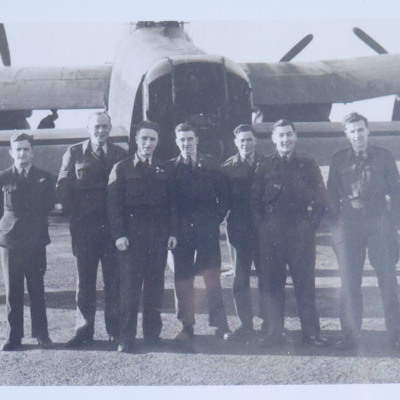 Seven airmen, including Charles Robert Cuthill (3rd left), standing at the rear of a Lancaster. 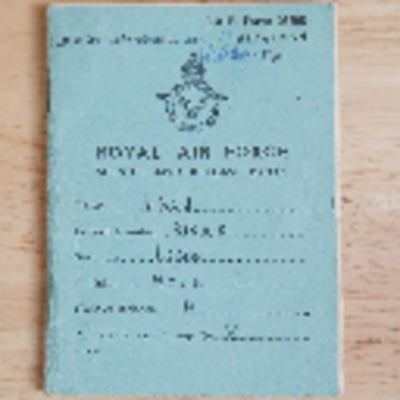 She is described by her commanding officer as:
'A very good conscientious airwoman. Has carried out her duties in a very capable manner. Keen, willing and uses…

Margaret Cuthill's account of her time in the WAAF. At the age of 17 she volunteered for the WAAF and was enrolled as a teleprinter operator. She was sent to Wilmslow for training. After four weeks of drill and physical exercise she was posted to…

Margaret Cuthill volunteered for the WAAF in Edinburgh. She went for her basic training at Wilmslow before completing her training as a teleprinter operator at RAF Cranwell. She was then posted initially to 14 Maintenance Unit. After the war she…
View all 10 items