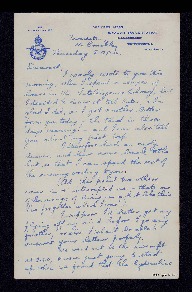 He writes of his first training flight in a Wellington, the weather and domestic details.