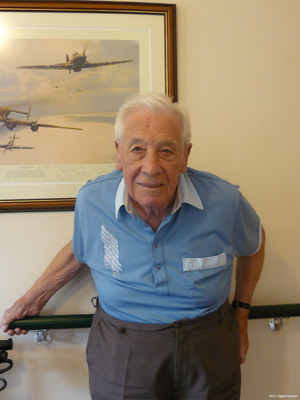 Len McNamara was born in Bristol in 1924. An apprentice plumber, he joined the Air Training Corps and volunteered for aircrew. Discusses his initial training at various stations, the gunnery course he passed with merit and honours, an escape and evasion course he attended, and crewing up with Pete Catterswife, a Kenyan. He flew Whitleys and then then converting to Halifaxes.
Len was posted to 10 Squadron at RAF Melbourne. He discusses mine laying and bombing operations, aircraft damage, social and service life at RAF Lisset, military ethos and the award of the Distinguished Flying Cross. After sinus problems, he was a reserve gunner going on operations with various aircrews. Len was posted to RAf Langar as an instructor, but volunteered as second tour gunners and was posted to RAF Woolfox Lodge to crew up with a New Zealand pilot on Lancasters. Discussess engine problems, Kenyan, Canadian Australian, New Zealand and English pilots, talks about Operation Manna and discusses 75 New Zealand Squadron. At the end of the war he finished up at RAF Ringway as parachute instructor.
Len was then posted to various locations abroad, did a code and cypher course and was demobilised. He went back to his plumbing apprenticeship, got married, settled in Bath but wanted to get back to service life. He started back as an airman and went into the air traffic control branch serving at different stations in Great Britain and Germany until he retired in 1971. Len was into post war meetings and memorial visits.