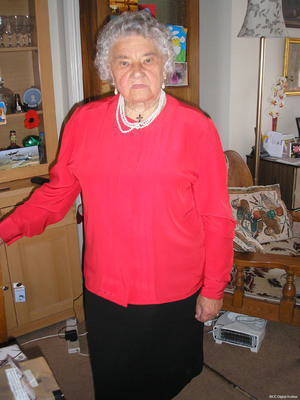 Wanda Szuwalska was sixteen years old when Germany invaded Poland. The family was deported to Siberia by the Russian army. They travelled for several weeks to the Arkhangelsk region where Wanda then worked as a logger. When war intensified between Russia and Germany, they were freed and she went to Uzbekistan where General Anders was forming a Polish Army. She joined up and travelled to Pahlavi, Persia, now Iran, and then on to Tehran where she trained in an Army camp. She then joined the Royal Air Force, came to England and was allocated to 300 Squadron where she served as a clerk, directing aircraft on the ground and was a driver. Wanda married Jan Gawel who was also in the Royal Air Force and they had a family. After the war, she worked in a clothing factory in Nottingham. After her husband died, she married again. She is a member of the Polish Air Force Association and has been awarded medals and honours for her involvement in Scouts, Girl Guides and social organisations.