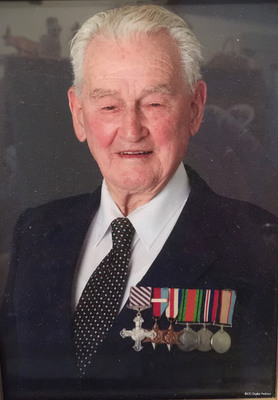 Herbert Adams grew up in New South Wales Australia and joined the Air Training Corps as soon as it was established. He later joined the Royal Australian Air Force and after training, he completed a tour of operations as a navigator with 467 Squadron. He then became an instructor at RAF Wigsley. He discusses an occasion when Me 110s attacked the airfield.

Amendment to Interview – Herbert Adams
After the interview Mr Adams provided the interviewers with the following amendment:
‘I had a lapse of memory about actually receiving my DFC. The citation and a small piece of ribbon did indeed arrive by mail. But the presentation (investiture) of the medal itself…..could have been by King George VI in January 1946, or, ‘come home in November, and get it from the Governor in Sydney’ – which I did, accompanied by my mother. Some time in 1946.’

Note re Tiger Force Training
After the interview Mr Adams provided the interviewers with the following information:
‘Wing Commander Rollo Kingsford-Smith (nephew of Sir Charles Kingsford-Smith) was a CO of a 5 Group squadron (the interviewer thinks this was 463). I think he had a hand in the organisation of Tiger Force. As Ted Picard probably did….he ‘marked’ a lot of my logs and charts (like a teacher); I think her vey likely designed the Navigation Exercises used for those going to Tiger Force squadrons.’