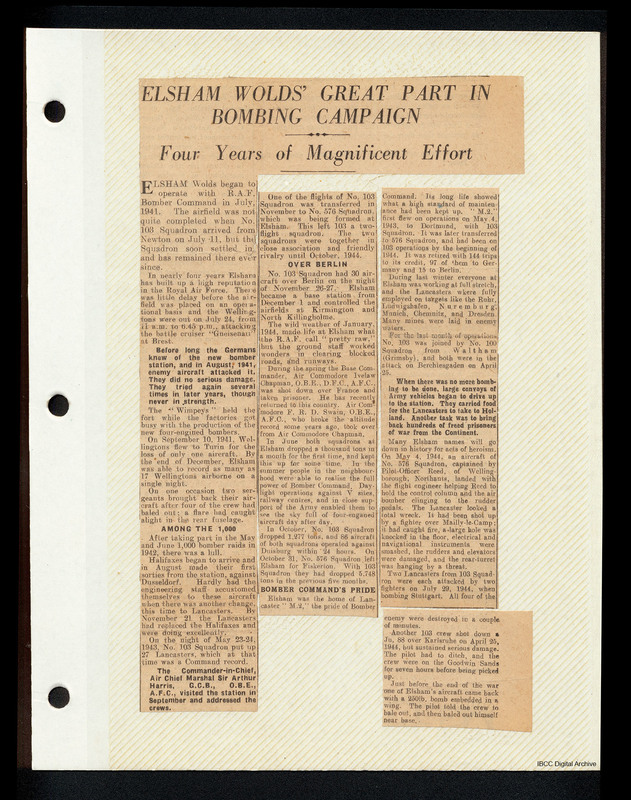 A history of 103 Squadron's operations at RAF Elsham Wolds.

One newspaper cutting on an album page

ELSHAM WOLDS’ GREAT PART IN BOMBING CAMPAIGN
Four Years of Magnificent Effort
ELSHAM Wolds began to operate with R.A.F. Bomber Command in July, 1941. The airfield was not quite completed when No. 103 Squadron arrived from Newton on July 11, but the Squadron soon settled in and has remained there ever since.
In nearly four years Elsham has built up a high reputation in the Royal Air Force. There was little delay before the airfield was placed on an operational basis and the Wellingtons were out on July 24, from 11 a.m. to 6.45 pm., attacking the battle cruiser “Gneisenau” at Brest.
Before long the Germans knew of the new bomber station, and in August, 1941, enemy aircraft attacked it. They did no serious damage. They tried again several times in later years, though never in strength.
The “Wimpeys” held the fort while the factories got busy with the production of the new four-engined bombers.
On September 10, 1941, Wellingtons flew to Turin for the loss of only one aircraft. By the end of December, Elsham was able to record as many as 17 Wellingtons airborne on a single night.
On one occasion two sergeants brought back their aircraft after four of the crew had baled out; a flare had caught alight in the rear fuselage.
AMONG THE 1,000
After taking part in the May and June 1,000 bomber raids in 1942, there was a lull.
Halifaxes began to arrive and in August made their first sorties from the station, against Dusseldorf. Hardly had the engineering staff accustomed themselves to these aircraft when there was another change, this time to Lancasters. By November 21 the Lancasters had replaced the Halifaxes and were doing excellently.
On the night of May 23-24, 1943, No. 103 Squadron put up 27 Lancasters, which at that time was a Command record.
The Commander-in-Chief, Air Chief Marshal Sir Arthur Harris, G.C.B., O.B.E., A.F.C., visited the station in September and addressed the crews.
One of the flights of No. 103 Squadron was transferred to No. 576 Squadron, which was being formed at Elsham. This left 103 a two-flight squadron. The two squadrons were together in close association and friendly rivalry until October, 1944.
OVER BERLIN
No. 103 Squadron had 30 aircraft over Berlin on the night of November 26-27. Elsham became a base station from December 1 and controlled the airfields at Kirmington and North Killingholme.
The wild weather of January, 1944, made life at Elsham what the R.A.F. call “pretty raw,” but the ground staff worked wonders in clearing blocked roads, and runways.
During the spring the Base Commander, Air Commodore Ivelaw Chapman, O.B.E., D.F.C., A.F.C., was shot down over France and taken prisoner. He has recently returned to this country. Air Commodore F.R.D. Swain, O.B.E., A.F.C., who broke the altitude record some years ago, took over from Air Commodore Chapman.
In June both squadrons at Elsham dropped a thousand tons in a month for the first time, and kept this up for some time. In the summer people in the neighbourhood were able to realise the full power of Bomber Command. Daylight operations against V sites, railway centres, and in close support of the Army enabled them to see the sky full of four-engined aircraft day after day.
In October, No. 103 Squadron dropped 1,277 tons, and 86 aircraft of both squadrons operated against Duisburg within 24 hours. On October 31, No. 576 Squadron left Elsham for Fiskerton. With 103 Squadron they had dropped 5,748 tons in the previous five months.
BOMBER COMMAND’S PRIDE
Elsham was the home of Lancaster “M.2,” the pride of Bomber Command. Its long life showed what a high standard of maintenance had been kept up. “M.2.” first flew on operations on May 4, 1943, to Dortmund, with 103 Squadron. It was later transferred to 576 Squadron, and had been on 103 operations by the beginning of 1944. It was retired with 144 trips to its credit, 97 of them to Germany and 15 to Berlin.
During the last winter everyone at Elsham was working at full stretch, and the Lancasters were fully employed on targets like the Ruhr, Ludwigshafen, Nuremburg, Munich, Chemnitz, and Dresden. Many mines were laid in enemy waters.
For the last month of operations No. 103 Squadron was joined by No. 100 Squadron from Waltham (Grimsby), and both were in the attack on Berchtesgaden on April 25.
When there was no more bombing to be done, large convoys of Army vehicles began to drive up to the station. They carried food for the Lancasters to take to Holland. Another task was to bring back hundreds of freed prisoners of war from the Continent.
Many Elsham names will go down in history for acts of heroism. On May 4, 1944, an aircraft of No. 576 Squadron, captained by Pilot-Officer Reed, of Wellingborough, Northants, landed with the flight engineer helping Reed to hold the control column and the air bomber clinging to the rudder pedals. The Lancaster looked a total wreck. It had been shot up by a fighter over Mailly-le-Camp; it had caught fire, a large hole was knocked in the floor, electrical and navigational instruments were smashed, the rudders and elevators were damaged, and the rear-turret was hanging by a threat.
Two Lancaster from 103 Squadron were each attacked by two fighters on July 29, 1944, when bombing Stuttgart. All four of the enemy were destroyed in a couple of minutes.
Another 103 crew shot down a Ju. 88 over Karlsruhe on April 25, 1944, but sustained serious damage. The pilot had to ditch, and the crew were on the Goodwin Sands for seven hours before being picked up.
Just before the end of the war one of Elsham’s aircraft came back with a 250lb. bomb embedded in a wing. The pilot told the crew to bale out, and the baled out himself near base.