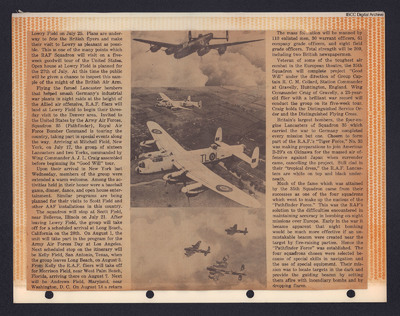 One newspaper cutting mounted on an album page

Lowry Field on July 25. Plans are underway to fete the British flyers and make their visit to Lowry as pleasant as possible. This is one of the many points which the RAF Squadron will visit on a five-week goodwill tour of the United States. Open house at Lowry Field is planned for the 27th of July. At this time the public will be given a chance to inspect this sample of the might of the British Air Arm.
Flying the famed Lancaster bombers that helped smash Germany’s industrial war plants in night raids at the height of the Allied air offensive, R.A.F. fliers will land at Lowry Field to begin their three-day visit to the Denver area. Invited to the United States by the Army Air Forces, Squadron 35 (Pathfinder), Royal Air Force Bomber Command is touring the country, taking part in several events along the way. Arriving at Mitchell Field, New York, on July 17, the group of sixteen Lancasters and two Yorks, commanded by Wing Commander A.F.L. Craig assembled before beginning its “Good Will” tour.
Upon their arrival in New York last Wednesday, members of the group were extended a warm welcome. Among the activities held in their honor [sic] were a baseball game, dinner, dance, and open house entertainment. Similar programs are being planned for their visits to Scott Field and other AAF installations in this country.
The squadron will stop at Scott Field, near Bellevue, Illinois on July 21. After leaving Lowry Field, the group will take off for a scheduled arrival at Long Beach, California on the 28th. on August 1, the unit will take part in the program for the Army Air Forces Day at Los Angeles. Next scheduled stop on the itinerary will be Kelly Field, San Antonio, Texas, when the group leaves Long Beach, on August 3. From Kelly the R.A.F. fliers will take off for Morrison Field, near West Palm Beach, Florida, arriving there on August 7. Next will be Andrews Field, Maryland, near Washington, D.C. On August 18 a return
[photograph]
[photograph]
The mass formation will be manned by 110 enlisted men, 30 warrant officers, 61 company grade officers, and eight field grade officers. Total strength will be 209, including two British newspapermen.
Veteran of some of the toughest air combat in the European theatre, the 35th Squadron will complete project “Good Will” under the direction of Group Captain R.C.M. Collard, Station Commander at Gravelly, Huntington, England. Wing Commander Craig of Gravelly, a 23-year-old flier with a brilliant war record will conduct the group on its five-week tour. Craig holds the Distinguished Service Order and the Distinguished Flying Cross.
Britain’s largest bombers, the four-engine Lancasters of Squadron 35 which carried the war to Germany completed every mission but one. Chosen to form part of the R.A.R.’s “Tiger Force,” No. 35 was making preparations to join American B-29’s on Okinawa for the massed air offensive against Japan when surrender came, cancelling the project. Still clad in their “tropical Dress,” the R.A.F. Lancasters are white on top and black underneath.
Much of the fame which was attained by the 35th Squadron came from their successes as one of the four squadrons which went to make up the nucleus of the “Pathfinder Force.” This was the RAF’s solution to the difficulties encountered in maintaining accuracy in bombing on night missions over Europe. Early in the war it became apparent that night bombing would be much more effective if an unmistakable beacon were created near the target by fire-raising parties. Hence the “Pathfinder Force” was established. The four squadrons chosen were selected because of special skills in navigation and the use of special equipment. Their mission was to locate targets in the dark and provide the guiding beacon by setting them afire with incendiary bombs and by dropping flares.