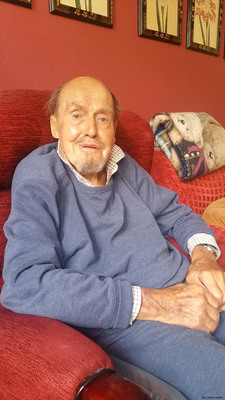 Bill Ballantyne was in his first year at Cambridge University and a member of the Air Squadron when war was declared out in 1939. Upon joining the air force, he was posted to South Africa, where he trained as a pilot on Tiger Moths. He joined 267 Squadron based in Egypt, and completed Transport Command duties by delivering supplies to the front-line, and returning wounded servicemen. He describes how his lack of fulfilment in this role motivated him to volunteer for Bomber Command. Ballantyne trained on Oxfords and Wellingtons at RAF Lossiemouth, before joining 77 Squadron, based at RAF Full Sutton. He recollects the events of an operation to Goch where, after missing the target they turned around and nearly hit a Lancaster head-on. He also describes preferring flying a Halifax to a Lancaster, the basic conditions of his Nissen hut, and visiting his girlfriend in York. He was demobilised in 1946 and resumed a career serving as an international lawyer in the Middle East. Ballantyne notes that in retrospect he is not proud of his role bombing civilians, and also recalls meeting the descendants of his wireless operator at a 77 Squadron Memorial Club meeting, who thanked him for returning their relative home safely.