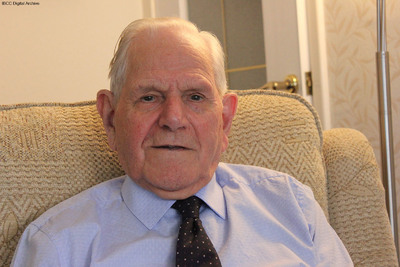 Harold Mercer served in the RAF initially as a transport driver and then trained to become an air gunner. He worked as a milkman before being called up in April 1942. Was sent to Weston-super-Mare, where he played in the military band. Was then sent to Blackpool to train as a transport driver. From there he was sent to RAF Bridgnorth for general training. Was then posted to 901 Squadron on barrage balloons at RAF Kidbrooke, London, where as a transport driver he supplied balloon sites with food and equipment. Was then posted to Eglinton, Northern Ireland at 5019 Squadron, where he drove a flight lieutenant to various airfields and maintenance sites. Was then sent to train as an air gunner. He flew on Ansons at RAF Pembrey and on Wellingtons at RAF Lossiemouth. Was then posted to 1663 Heavy Conversion Unit at RAF Rufforth on Halifax Mark IIIs and from there to 77 Squadron at RAF Full Sutton. By that time, war had ended and so he never got on operations. Was then posted to RAF Beaulieu to the Air Force Experimental Establishment.